All Points Bulletin: Techno the Hamster 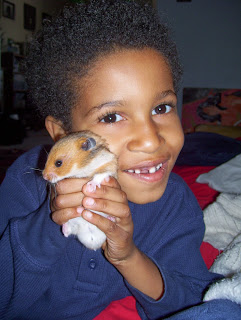 Yesterday morning I was nursing a cup of tea and watching the early morning news, when my son tearfully emerged from his room and asked me, "Where's Techno?"

Techno is our hamster. He moved in two weeks ago and ever since then he's been happily spinning on his exercise wheel all night. It's like he thinks he's at a rodent rave or something.

I totally get the nocturnal thing since I'm usually up all night as well. But unlike Techno, I don't get to curl up in a ball and sleep all day.

Staring at my tears running down my son's cheeks, I could only think about how how tired I was and how it was barely 6 AM. It was waay too early for anyone to be asking me where a damn hamster was.

I responded to my son's query with a completely unsympathetic, "He's in his cage. Go back to bed. Now!" In my defense, I'd only slept for maybe an hour so the emotionally intelligent brain synapses probably weren't connecting.

There were even more tears and my son wailed, "No he's not in there and his cage door is open! He's escaped!"

This was not what I needed to hear! I popped off the couch and followed my son to his room. Sure enough, the cage door was wide open.

"He's dead!" my son cried. "I'm never going to see Techno again!" He dissolved into a crying bundle on the floor.

I could only hug him and say stupid things like, "Don't worry, Techno's just out exploring! He'll come back as soon as he's through partying."

I reminded my son that we didn't even have a cat, but he was inconsolable. Every five seconds he asked me, "Have you found Techno yet?"

This led to me promising that no matter what I would find Techno. I explained that he was probably curled in a ball sleeping behind a bookcase or something so we'd have to wait till nighttime.

The sun sets at like 4:30 in the afternoon though so I quickly felt like George Bush clarifying a statement about catching Osama bin Laden.

"I didn't say when I'd find him. I just said I would find him, so chill out! Sheesh!"

Because a downpour of tears seemed to be imminent, I clarified, " He's only going to come out when it's all quiet and he thinks everyone's asleep."

Around 10 PM, after me being harassed every half hour about finding Techno, everyone but yours truly was snoring away. It's no secret that I have problems sleeping. And if I'm lucky enough to fall asleep, that doesn't mean I stay asleep. Sometimes it's worse than others, but right now I've been getting maybe three hours of sleep a night. If I'm lucky.

So imagine my frustration that last night, the one night in forever where I actually felt tired enough to fall asleep at a normal hour, I was instead stalking Techno the escaped hamster. But a promise is a promise and I knew the motherhood card would surely be tarnished if Techno wasn't firmly ensconced in his cage come morning.

I put some of Techno's food in the middle of my living room and curled up on the couch with my laptop and a blanket, hoping it wouldn't be too long before our hungry, hard-partying hamster emerged for a bite to eat.

An hour went by. I surfed around online, probably came over and read what was happening on your blog. Nothing. was. moving. Not a creature was stirring, not even a hamster. I could barely keep my eyes open.

Another hour went by. I was cold and tired. I got up and turned the heat up. I wanted to go to bed. But how could I face my son's eyes in the morning and say, "Honey, I didn't catch your hamster because I was frickin' exhausted. Sorry."

I picked up my old dog-eared copy of "Dracula". Could pondering the sexual innuendo in a classic novel keep me awake?

Apparently not because I "came to" just before the book slid out of my hands. And that's when I spied something stealthily creeping across the living room floor. Yes! The little sucker had emerged!

Unfortunately, I was too clumsy in my approach. Techno gave me a mean side eye and did a 180. I chased him across the living room and into the hallway where he slid past my outstretched fingers and into the hallway closet. I poked around in there and determined he was either hiding behind the little file cabinet I keep in there, or else he'd jumped into a shoe. Either way, he was no where to be found.

Back to the couch I went to wait for Techno to emerge once more. Two hours went by before he came out again, skittering across the floor toward the bait. Before I knew it, I was creeping along on my hands and knees, sneaking up on him. I managed to get close enough to reach out and snatch him. This time though, he didn't even try to run. In fact, he seemed happy to be going back to the big house. 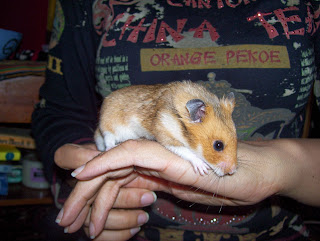 I put Techno back in his cage, shut it and turned the cage so the door faced the wall. I'm not trying to have to catch him again! I spent a moment watching him happily guzzle water and chow down on his food. Then he climbed into his nest, curled up and went to sleep.

But keeping my promise to my son makes my fatigue all worth it. He woke up extra early this morning just to check the cage and see if his beloved Techno was there.

After several moments of squealing with delight, he came running into the living room yelling, "Mommy! You caught Techno! You're the best mommy ever!"

You should print this story. Then seal it in an envelope and when your son is grown and married with kids and complaining about how hard being a parent is, pull out the envelope and give it to him.(lol)

It's amazing the stuff that parents do for us that we never know about.

Liz Dwyer said…
DMB,
Very nice to hear that! I'm just glad there wasn't a hidden camera catching my crawling on my hands and needs.

Joy,
I've wondered about the whole pre-menopause thing as well. But I always watch my sister to see what she goes through and that hasn't hit her yet. She has no problems knocking out for the night...and when she does, she takes Tylenol PM. That does nothing for me. :(

Anonymous said…
Wow, such maternal devotion in the face of filial distress - v. impressed! I had loads of hamsters when I was a kid and I got equally distressed when they vanished. Don't recall my mum being so concerned though. The search-and-rescue team stayed firmly in the parental bed. Just make sure you don't bury a hamster that looks dead but is only hibernating. I did that once, and I've never forgotten my mistake.
3:21 AM, December 22, 2007

Lola Gets said…
Awww, thats such a cute story! Im sorry you didnt get any sleep though - but those are the things we do for those we love.

You might want to check on the lock on the cage door. I remember back when I was in the 2nd grade, my class had a hamster. On the weekend he stayed with me, I saw that rat grab the bars of his cage door, and shake it loose! That fool thought he was slick, escaping and all. Hmpf. So check the cage door, your hamster might be trying to pull a fast one on you, lol.

Jameil said…
girl my mom used to make me catch my hamster myself. she would wake me up if she heard him in her room. lol. so i guess you are the best mommy ever! lol mine's pretty great, too.
10:00 AM, December 22, 2007

heartinsanfrancisco said…
Awww, you ARE the best Mommy ever!

Keith said…
Techno is kind of, sort of, something that I caught in a trap earlier this week. You're a great mommy for even agreeing to let that rodent, cute or not, live in your house. Putting my personal feelings about hamsters aside, your narrative of catching him was really funny.
6:59 PM, December 22, 2007

Liz Dwyer said…
Nick,
You buried it? Wow. I'll definitely be on the lookout for the hibernating effect. EEK!

I had to catch it though because I had visions of it dying behind a bookcase or something and then smelling.

Lola,
I've checked the cage lock and can't figure out how he got out. So, right now the door is turned toward the wall so no escape is possible. At least, I hope not!

Jameil,
I have no doubt that your mommy is awesome. But my son catching that hamster...I knew it wasn't happening. He would've fallen out in the floor snoring and Techno could have come and gone without him even knowing.

Heart,
I slept marvellously on Friday night and again on Saturday night. Last night, not so much. Almost 5 AM and I have not been to bed yet. ;(

Keith,
Glad you caught Techno's cousin in your trap! I still can't believe I have a rodent living in a cage. But my son insists that he's not a mouse because he doesn't have the long tail. I'm telling you, that thing straight up acted like mouse with the way it scurried around and hid in the closet.