The Morning After The Wedding

Hopefully, the beautiful bride, my dear sister, Priscilla, is sleeping in this morning. 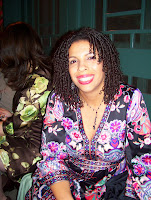 I clearly am not sleeping in. I came home and fell asleep on the couch around 3 AM, in my dress! AAGH! And I've been up since 6 AM so I'm clearly going to need a nap later on today.

Thank goodness the dress I bought has long sleeves because it was an unseasonably cool 42 degrees here last night. Here's one of the few shots where you can see more than two seconds of my dress. I love it so I suppose it was totally worth the shopping drama.

But, despite loving it, I kept my coat on most of the night because I was freezing. The outdooor wedding and reception were both in the courtyard of the Pacific Asia Museum in Pasadena. Even though there were heat lamps, it was ridiculously cold.

Did I already mention that it was COLD? 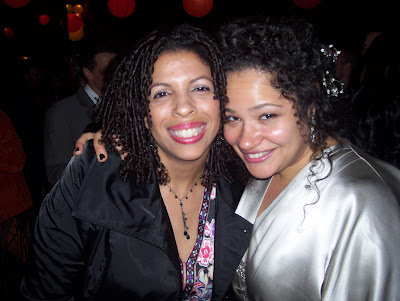 That's how I know Priscilla was the bride...only sheer adrenaline-charged happiness can keep a woman from putting on a coat when it's biting cold outside.

Priscilla and I taught at the same school in Compton. We started the same year and our rooms were right across from each other. I remember when she got bit on the leg by a crazy little girl named Brandy. She remembers when girls in my class and hers were paying 5o cents to sit next to a boy named Patrick at lunch. We both were not so great at managing our classrooms in the beginning. And the kids used to ask, "Are y'all sisters?" even though we really look nothing alike. Besides she talks waaay faster than I do because she's from New York City. I'm like the slow country cousin in comparison.

She's also a crazy New York driver. My second year out here, I moved to her apartment building and we lived next door to each other, which meant we could carpool back and forth to school. She'd laugh when she'd catch me riding in the passenger side, pushing my foot down like I was pressing a brake pedal. I'll give it to her though. That girl can work a stick shift like nothing else. I can drive stick, but not like that!

I remember when she met her now husband, Daniel. After a couple years, he moved next door with Priscilla, and then his sister moved downstairs with her boyfriend. We had a little community going on for awhile here. And then four years ago Priscilla abandoned us and headed back to New York, taking Daniel with her.

After that, it was clearly just a matter of time till I was at their wedding trying not to cry. (Trust me, liquid eyeliner is not pretty when it's running down your face.)

Now that they're married, I'm ready for a baby mini-Priscilla to come along because I need to line up the prospects for my sons. Hurry up and get pregnant! But, no pressure because all that will come when the time is right.

In the meantime, off to the gym to work off some of that wedding cake.
Email Post
Labels: Friends memories weather weddings

Liz Dwyer said…
Chani,
Thanks so much for saying so! She was very lovely...plus everyone who knows her acknowledges she's one of the most photogenic people we know!
1:04 PM, December 02, 2007

I got married in December AND wore a strapless gown. It was about fifty something degrees and yes, I was too happy to notice the chill, too!
5:24 AM, December 03, 2007

Jameil said…
hurray for loving dresses!! priscilla was cold! look at her nose. lol. she just didn't care. please tell me how to do strikethrus b/c i think they're hilarious!!!
6:19 AM, December 03, 2007

West said…
Still lovin' your blog even though I sometimes have nothing to say or take too long saying it.

Lola Gets said…
Congrats to your friend! I think you both looked nice. And no, you dont look alaike, you both just have fair skin. Folks say that about me when I hang with my fair skinned friends too. We just shake our heads and laugh, cause we cant change people, lol.
L
9:22 AM, December 03, 2007

Liz Dwyer said…
DMB,
Thank you! So you are almost to another anniversary? Congratulations!

I got married in August so I only had to deal with the Chicago humidity. But like you, I was so psyched, I didn't even notice.

Jameil,
Now that I see the nose, you're probably right! I was so cold I made my husband go over to Starbucks and get me a chai! That helped a little bit.

To do strikethrus, go to this page. I was so happy the day I finally learned how to do them. I love them, too! :)

West,
You are so sweet to say that. Trust me, I totally get it. If we all commented on everybody's blogs every day, we'd be spending HOURS online!

And, thanks for the congrats.

Cyndee,
So, when are you going to take the plunge and join me in my nappitude? Hmm?? And most of what you're seeing is still the straightened part. If I cut it, it would only be like four inches long. But I'm hanging in there with it. Love you too!

Lola,
True, if I'm around someone who's lighter, folks will automatically ask if we're related. It's a little annoying actually because it happens with two of my other friends as well. But then when I go out with my girls who are darker or with my cousins (who actually look like me), that never happens.

Ian Lidster said…
You and your sister -- dazzling seems to run in your family. Congratulations on her wedding, and your dress is fabulous.
If you are talking about cold, would you like about 16 inches of snow to go along with it? Eecause that is what we got this weekend.
2:15 PM, December 03, 2007

Jameil,
Hmm...that's weird. Okay, well go to: http://www.epinions.com/content_3826622596
or else just google "how to strikethrough". I was trying to type how to do it in here, but for some reason, I can't put the html for strike thru in the comments. I keep getting an error message.

Jali,
Thank you very much! I was glad to have her back here too. Except she's headed back to New York after her honeymoon. :( I wish she'd just move herself back out here because I really miss her.

Ian,
She is dazzling, but we're not really blood relatives! She's just my sister in spirit! And goodness, 16 inches of snow? Whew!

Is this the wrong time to mention that it's supposed to be 80 degrees here tomorrow?

Open Grove Claudia said…
Gosh you are gorgeous! What a beautiful dress.

Tafari said…
Ok there you go sleeping in clothes!!! LOL!!!

People out west kill me when they say it is cold. You know 42 degrees is shorts weather in MI. :)

Liz Dwyer said…
Claudia,
42 degrees out here feels like 22 degrees! It's been a brutal past couple of days and I have had the heat on non-stop!

Bygbaby,
Oh my goodness, you're so right! LOL!

Yep, I've been redoing the straw set...love it but I'm trying to figure out when/if I want to do the "big chop", you know?

I can't believe I grew up in the Midwest when I complain about 42 degrees, but I'm telling you, the blood thins! My mom told me it is really cold right now out there so I should stop complaining!
6:58 AM, December 04, 2007