I have come to the conclusion that I no longer live in Los Angeles, the City of Angels

Driving down Beverly Boulevard the other day, it's clear that this is now your town. It's the "City of Sweeney Todd". 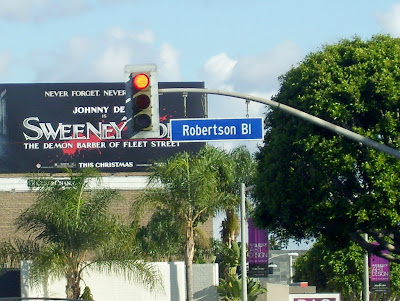 Sweeney, how is it that you're managing to be everywhere?

I counted over 25 Sweeney billboards lining the five mile stretch of Beverly between Robertson Blvd. and Vermont.

Aren't you worried about overexposure?

True, each billboard comes with a nice swath of red. I think that's supposed to represent a splatter of blood. But I know you're misunderstood, Sweeney. Tell me, it's just you doing some free form painting, right?

Also Sweeney, I've read that you're some sort of a serial killer. In fact, they call you "The Demon Barber of Fleet Street". LA is a great place for you then because not only do we have a whole lot of "demon barbers" with their overpriced salons, most celebrity murderers get away with it in this town so don't worry about a thing! 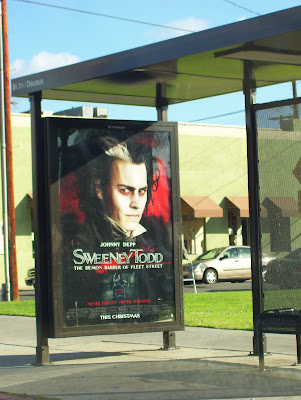 I'm not sure if we have a "Fleet Street" though. I think the only "Fleet" folks here might be familiar with is the laxative kind. Oh, the ways some folks out here try to stay thin...

Despite this Sweeney, I have to be honest. I just don't know if you're really ready to take over LA.

I mean, you're really pale all over. Even your lips are bloodless. I know you're not Dracula so I'm thinking that pale problem could just be a crystal meth issue. Let me make you an appointment at a spray tan salon.

Besides, looking like you do, you need to start worrying that someone from Hillary Clinton's campaign is going to start a rumor that you're not only a drug user, but quite possibly also a drug dealer.

I mean, if they could insinuate this about Barack Obama, the most un-drug dealerly looking guy on the planet, what might Clinton's spin meisters do to you, Sweeney?

So, let's clean up your act!

I'll send you to the MAC store at the mall and you can fight it out with the teenagers over the concealer. Trust me, it's worth the money.

An added bonus is ff you flash your razor blades in the store, all the teens will probably think you're really cool and emo. 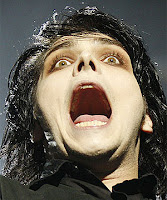 Besides, half of them already think you're that guy from My Chemical Romance, Gerard Way.

Don't worry, Sweeney. I know Gerard's giving you a run for your money, but I think you're still winning the, "I look like death warmed over," race.

But if, while looking at Gerard's picture, you start to feel like the gray streak in your hair is a tad too aging for you, I'm sure we can hook you up with a colorist to just take your hair to a pure black.

And, um, it's not that I want you to stop feeling like yourself, but while we're at it, how do you feel about us borrowing your razor to cut some layers in your hair as well?

Your hair's also sort of frizzy and dry. What's up with that? Do you need someone to take it back to the old school and hook you up with a deep conditioning treatment and a dollop of Blue Magic?

I'm only telling you all this, Sweeney, because if you want me to go out with you next weekend you are going to have to get it together before then. I know it must seem odd that it's only the beginning of our relationship and I'm already trying to change you, but yeah, don't have me showing up to the theater for our date only to be embarrassed by your crazy self.

If you can't handle business and make yourself more

presentable, I'll just go out with Kiera Knightly again like I did last weekend.

Didn't know about that, did you, Sweeney?

I just can't stop thinking about the two hours Kiera and I spent together. I even tried to get her to eat a sandwich but she turned me down.

Yeah, overall, I think I had a better time than she did, but she looked absolutely smashing in her green dress.

Now, Sweeney, don't be angry about me and Kiera. I'm just keeping it real with you. So you let me know what you want to do and get back to me as soon as I can..

Blowing you kisses and don't try to cut anybody with that razor,

Hilary is a dirty infighter, but she really ought to keep her rumors and slams a bit more realistic than accusing Obama of being a drug dealer. She could also take some lessons in honor from him, but won't.

Liz Dwyer said…
Heart,
Yeah, I've always been a huge Johnny Depp fan. I even like the Ninth Gate, one of the MOST confusing films ever! I also admire the risk taking he does as an actor. I about died during the first Pirates movie. Johnny, Orlando and Kiera on screen together...hotness! :)

I do want to go see Atonement again though. I haven't been able to stop thinking about it. It's just phenomenal. I cried like ten times during it.

And Hillary, I have no words...except to say that her campaign must really think we're all stupid enough to think she had nothing to do with that. Seriously, they're acting like middle schoolers and it's so disappointing.
1:35 PM, December 14, 2007

nyc/caribbean ragazza said…
That letter to Sweeny Todd was hilarious.

I'm wondering if the soon to come awards season is why there are so many of those billboards.

Maybe they are trying to get the attention of Academy voters?

Sundry said…
I love the Depp. I love the Sweeney. I don't trust Tim Burton with his heavy-handed directing to not oversell the plot in the same way that the marketing team seems to be.
9:32 AM, December 15, 2007

Liz Dwyer said…
NYC/CR,
Alas, Sweeney has not yet replied to my missive. I wonder why not. ;0

And Hillary...it's just such a disappointment.

MDC,
Maybe they are trying to get attention for the film. But I totally think Atonement is going to clean up come Oscar time and I've seen ZERO billboards out for that one.

Sundry,
Yes, it'll probably be way over the top. I wonder what their marketing budget for the film. Seems a lot is riding on it.

Lola,
I might wait till DVD because I know I don't do well in movies where people get killed, even if it's supposed to be sort of a comedy. There's tons of free screenings here, but I've only been once or twice. I should go more frequently.
12:17 PM, December 15, 2007

Keith said…
You have issues.

We don't have that Sweeny love going down in NYC. It's all about "I AM LEGEND" over here. I guess film companies pick cities to take over.

I don't even talk about Hill anymore. For me it's all about Obama and whoever he runs against in the general election.
8:11 AM, December 16, 2007

the last noel said…
I don't know about this version of Sweeney. They Sweeneys I've seen (live and on PBS) were these hefty guys, obviously destroyed men with a chip on their shoulders. Depp looks liks a cartoon. I'll have to see for myself.
12:04 AM, December 17, 2007

BZ said…
I can't wait to see this! I love the musical. Seen it twice here in Boston. And, I'm looking forward to the movie adaptation with one of my favorite actors. I heard rumor that he had no vocal training prior to the making of this movie. I'm interested in seeing how he fares.

Ian Lidster said…
I had always thought the Sweeny Todd tale was true, but I recently read that it's actually a myth, a folk tale. Drat.
I agree with Heart about Johnny Depp. He never fails to impress.
12:46 PM, December 17, 2007

Liz Dwyer said…
Keith,
Oh yeah, issues are definitely had on this end! ;0

Well, I can see how NYC has to be all plastered with "I Am Legend" since it's set there. I'm so not interested in seeing that. I don't know why.

Noel,
It does look cartoonish and in some ways his costuming makes it feel like he's played this role before even though he obviously hasn't. I wonder how that's going to play out on screen.

BZ,
I've never seen the musical but in the commercials it seems like he's hanging with the singing. And for real about Hillary. I'm really disappointed in her and her peeps. I'm surprised she's not savvier than these stunts she's having her camp pull. It's a real shame. They need to step and talk about how folks are going to pay their heating bills this winter, not whatever Obama did with drugs.

Ian,
I always thought it was true as well! It seemed true! But then again, I'll believe a National Treasure movie if it seems believable. ;)
3:11 AM, December 18, 2007

1969 said…
I love Johnny Depp and I must see Sweeney Todd!!!! No makeover needed.LOL