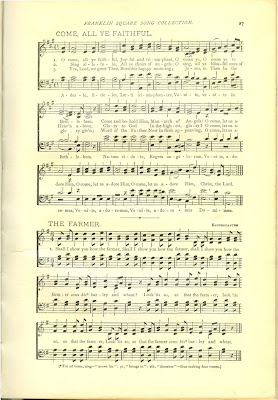 I'm still not sure if I'm ready to believe that this is actually true, that it's really December 24th, but all signs point to yes.

Besides, there were actually carolers outside my local Trader Joe's last night. They were singing "O Come All Ye Faithful" while standing outside by the shopping carts. They were singing in Latin. And yours truly knows all the words in both English and Latin. So I took my worst. singing. voice. ever. self over there and joined in with them.

Gosh, I haven't sung that in ages! Love it! But, I have to tell you, five seconds into it, I began imagining other shoppers saying, "Betty, I didn't know black people knew Latin. Did you?"

Or at least that's what I thought someone would say until a woman grabbed a shopping cart and growled to her friend, "I can't stand all this Christmas-y, Jesus s*%t! It's everywhere!"

Um, yeah, because Christmas is, like, tomorrow, dummy. But whatever, I'll just blame her grinchiness on PMS. Or hunger.

No kidding, she looked like she could use a sandwich... and a Norman Vincent Peale book. 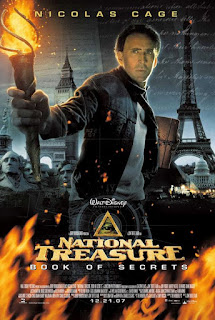 Speaking of movies, I went on a date with my eldest son on Saturday morning to check out National Treasure: Book of Secrets. We went to the 9:45 AM show because there was no way I was paying $12.75 a ticket to see that film. I was all about the matinee price of $8.75 and the matinee is only the first showing on the weekends.

As far as the film itself, the best performance hands down goes to Nicolas Cage's lacefront wig. I'm serious, it was rather entertaining to watch his hair bounce and shake during all the action sequences. I honestly don't get why he doesn't just say it loud, "I'm bald and I'm proud!" After all, we all know he hasn't had that much hair since forever.

Anyway, after the movie, I dragged my son into Anthropologie. He clearly wanted to die but I gave him my stern mommy face and told him there were, "Cute things on sale."

I fingered some blue and white dessert plates but quickly got distracted by someone speaking loudly en Francais. I turned, and a few feet away from me a thirty-something white guy was talking with two very attractive black women.

The gist of their conversation was that one of the women hadn't seen him in awhile and wondered how he was doing and where he'd been. This woman did most of the talking and literally purred, "We should get together soon. I've missed you." I caught her hand brushing the lapel on his jacket. He agreed in a sly, seductive tone that indeed, they should.

I thought nothing else of this rather obvious flirtation until I was standing in the incredibly long, snake-shaped checkout line trying to entertain my morbidly bored son. Suddenly, I heard a rather harsh voice say, "What were you talking to those black women about?"

I looked up and saw a rather annoyed looking blond addressing the same guy who'd been talking to the two women.

He played it super coy with his response. "What women?"

She didn't falter though, and she certainly didn't whisper. "Those two black women you were talking to."

I was immediately all eyes and ears. This was going to get interesting. This was what holiday shopping is about: eavesdropping on people!

He shrugged his shoulders nonchalantly, arrogantly, and said, "Oh, those women I said hi to?"

She nodded, waiting for his explanation, her HUGE diamond ring glinting in the light.

"Oh they were nobody," he drawled. "The one was a secretary at the office and then, poof, she just disappeared one day." He waved his hand like he was a magician performing a trick.

Then he changed the subject and asked her about what she was buying and whether she wanted him to put it on his card. or not.

She did want him to put it on his card.

A part of me (the insane part) wanted to yell out, "Take it from this black woman that he's LYING and he's about to go have hot, tantric sex later on tonight with that other woman!"

But another part of me wanted to just laugh uncontrollably. Now that I think about it, I suppose it was his superior demeanor coupled with her complete inability to whisper. I wonder what Christmas carols they sing at home, "O, Come All Ye Flirtatious Liars"?

Perhaps the carolers should sing that rousing tune outside the Trader Joe's instead. I wonder if anyone would complain.
Email Post
Labels: Christmas holidays kids Los Angeles Movies Shopping snow the grove Trader Joe's weird things I experience

This post had me rolling this morning. First I can't believe that grouchy woman. Good thing she doesn't live in NYC where there are more Christmas decorations and in my humble opinion more of the holiday spirit.

Your line about the awkward Christmas dinner and the lack of a progress in Hollywood was dead on. That is the type of energy I will not miss when I leave.

I agree with you regarding Nic Cage. A few years I went to visit my friend who was producing a movie Nic was starring in. I was told not to make eye contact with Nic. People have issues.

Your writing is so descriptive. I could just see that French man lying to his wife/financee. ha, so wrong but hilarious.

Anonymous said…
I bet the French guy and his woman had a real ding-dong as soon as they were in private! And yes, I bet there is (or was) some hot sex in the offing from the black secretary! The lies that just trip off some men's tongues....
9:37 AM, December 24, 2007

SheWhoLives said…
LOL - Nothing like a bit of juicy eavesdropping!!

Black Wombmyn Chat said…
And the Oscar goes to...the lace front wig!!!!
Hysterical.
And you understand Francais? Magnifique. But please don't repsond in French. I admit I cheated my way through Intro to French in college.
10:19 AM, December 24, 2007

That's so funny. And the name Uncle Cutty is really funny.

Also when you mention the carolers being outside Trader Joe's, I thought there is no way they could be inside, Trader Joe's are so claustrophobic. At least the ones here are.

You talk about the traffic being light. That's the one thing I love about holidays, since I'm not doing the family thing, the lack of traffic.

I really like to go for walks on holidays. The streets are so empty and peaceful.

Anonymous said…
Liz, you are not the only Black woman who knows "O,Come All Ye Faithful" in Latin. :) I am a tried and true (semi-lapsed) Catholic with 12 yrs of Catholic school/Catechism class under my belt. Sister Leone (Holy Name on Jefferson Blvd.) used to make all us little black girls and boys practice and practice and practice. Kyrie eleison...

Wow! That brought back memories...

Liz Dwyer said…
NYC/CR,
Thanks for the well wishes! I'm glad my insomniac musings gave you a chuckle. You know, the woman in Anthropologie seemed more fiancee than wife. But perhaps she'd do well to brush up on her French so she can figure out what the heck her man is talking about!

Lola,
Absolutely. I've enjoyed eavesdropping ever since I was a little girl listening at heating vents. I found out lots that I probably shouldn't have.

Nick,
Oh he was quite a liar and the "fiancee" knew he was lying. Oh, the bargains folks arrive at in relationships. And you know didn't strike me as the secretarial type. She seemed too high fashion, too actressy.

Shelly,
My life would truly be dull without eavesdropping. And thank you for the warm wishes. I'm looking forward to a lovely time with my family!

DMB,
I can understand enough. I'm so out of practice these days that my reading and listening skills are much better than what actually comes out of my mouth. I confess I was the one who helped several people cheat their way through French 1, 2 and 3 in college. However, the details will be concealed to protect the guilty. ;)

MDC,
Yes, Uncle Cutty in my world is that one smarmy uncle everyone seems to have. Comes over for Christmas but no one wants to sit next to him. LOL!

Our Trader Joe's tend to be overcrowded and claustrophobic as well. Half the time I'm convinced they're in violation of fire codes because there's so many people in there.

Going for a walk is a great idea. Maybe I'll do that tomorrow. And I hope you're enjoying Christmas Eve as well. I'm eating California Rolls and watching Pirates of the Carribean!

Joy,
Yeah!!! I'm so glad you know it too. Yes, all the Catholics/Catholic school alumni know that tune in Latin. Or at least they should. It totally brought back memories for me as well. And isn't the Latin so much better?

Hope you have a very merry Christmas, too!

Jameil,
It's SOOO fun to sing that in Latin. I'd really forgotten about it.

heartinsanfrancisco said…
I can't stop laughing about the "I didn't know black people knew Latin" remark. Of course, you've got to factor in that anyone who would say that would be so ignorant that she probably wouldn't know it was Latin.

"O holy night,
It's so good to be whiiiiiite.."

L.A. always clears out on holidays because hardly anyone is really FROM there. Except Flip and a handful of other expats.

Have a wonderful Christmas, Liz. Enjoy your lovely family and then get your ass back to the blogstone soon.
10:06 PM, December 24, 2007

Andromeda Jazmon said…
You overhear the best conversations! It makes me think I ought to go shopping more often.

Liz Dwyer said…
1969,
Thank you...wish I was at your house eating because I know you have some good food! :)

Heart,
Oh it's a lovely Christmas today. I hope yours is as well. Yes, the streets are rather bare. My eldest has decided that next Christmas we should go to Hawaii. I told him sure if he's paying! LOL!

Cloudscome,
Yes, I do overhear some gems but I think it's only because I've trained my ears to listen. In fact, I heard a DOOZY at Starbucks this morning. I'm going to write about it in a bit because it was just too much!

BZ said…
I love Trader Joes! LOL Glad to be catching up with you. You always have me laughing. Dude knows he loves him some sistas, yet he marries Barbie. I know a couple guys like that. *SMH*
12:03 PM, December 27, 2007