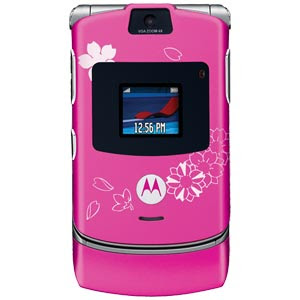 I got a new cell phone in July.

The style was a complete 180 from the gray utilitarian phone I'd had for two years: Hot pink with flowery tattoo etchings. Truly, the perfect phone for leaving a job and venturing out into the rest of life.

Since I didn't want old work contacts constantly calling me to ask me random questions, I decided to also get a brand new phone number to go with the brand new, super cute phone.

The second day of my love affair with this little pink number, our romantic interlude got interrupted by a call from an 800 number. Being a total Curious George, I answered. I remember thinking, "Maybe it's someone calling to tell me, "Congratulations! You've just won a million dollars!""

Instead, the voice on the other end said, "I'm calling on a personal business matter for Carrie Oster. Is this Carrie?"

My dream of winning enough loot to buy up half of the Anthropologie store at The Grove was shattered in an instant. Instead of winning a prize, I was talking to a bill collector. Someone else's bill collector!

Since I am clearly not Carrie Oster, I let them know, "I don't know her and this isn't her phone number."

Did they believe me? Oh, no. Not at all.

The caller kept calling me Carrie, as in, "Carrie, we need to speak with you about a personal business matter. Can you verify that you are Carrie?"

After about ten minutes, I'd lost all patience with the one-track minded individual on the other end of the line.

"Look, I only got this phone number two days ago and I don't know who Carrie Oster is! Don't call me again!"

I was pretty pissed off and ranted to no one in particular about knuckle headed bill collectors who make $12 an hour.

After a week of harassment by everybody and their mama, my peaceful, pink phone toting self had turned into Naomi Campbell's eviler twin. I began to want to kill Carrie Oster by busting her upside the head with my new phone.

I stopped answering the phone when any number I didn't recognize came up. But bill collectors know how to leave messages.

"This message is for Carrie Oster. Carrie, please call..." And on and on. Yeah, bill collectors know how to leave messages ad nauseum.

Four months later, they are still calling for Carrie Oster. Tonight, I told one credit card company for the millionth time that I have no idea who she is, where she is, how old she is, what she looks like or whether she's related to the blender making Osters.

There's a reason Carrie didn't call them and let them know her new number. It doesn't take a degree from MIT to figure it out either. Get a clue, bill collectors. Carrie ain't paying you a dime!

They told me I have to send certified letters to get them to stop calling my phone.

Yes, that's right. I have to pay $5.21 per letter to get them to stop harassing me about Carrie Oster's debt.

So, if you happen to know a Carrie Oster, tell her to call CitiGroup and a whole host of other friends back.

I'm sure they'll be thrilled to hear from her.
Email Post
Labels: Cell Phones weird things I experience

Malik Akbar said…
It's not true that they have to send you a certified letter. What they're doing is illegal, and as soon as you advise them that you're not the individual they're trying to contact, they're legally required to leave you alone. Let them know that they're violating the fair debt collection act by a) telling a third party that "Carrie" owes them money, b) contacting you, the third party, more than once, and c) if they contact you again, you'll file a complaint with the state attorney general's office and the federal trade commission, and if the harassment persists you'll consider filing suit for damages. They should go away pretty quick.
5:28 AM, November 08, 2007

I can only imagine how annoying that must be.

Can your service providor help? Maybe you can ask them to generate you a brand new number instead of a recycled one.It's kind of their fault for assigning you a number with such a sorded past.
7:11 AM, November 08, 2007

Jon said…
Other than assuming the identity of a non-bill paying person, what do you think of your new pink phone?
7:46 AM, November 08, 2007

thailandchani said…
I agree with Malik. It is so annoying to get those calls. My home phone rings at least twice a day with some bill collector for Deborah.

And I've had the number for 7 years! They are calling everyone with a common last name.

Liz Dwyer said…
Malik,
Thank you!!! I figured there was something fishy in the water with what they're doing. I'm going to try saying all this next time and see if it works. I sure hope so!

MDC,
I thought about that but I'm not sure if I want to go through a new number again. Most folks got the email I sent about it, but other people were totally confused because I'd had the other number for like six years. But next time my contract's up, I might think about that.

Jon,
Love the phone. Usually I'm so not like that. I just want a phone that works, who cares what it looks like, but I really love it. However, I think if it came in black with red tattoos, I might love it a teensy bit more! :)

1969,
LOL! I know some of these heffas that call just want to straight up say to me, "I know you're lying! You really ARE Carrie!"

I think Deborah and Carrie should find each other and become roommates. Seems like they have a lot in common.
8:19 AM, November 08, 2007

Jen said…
Yikes... I had that happen in college because a woman in my apartment building happened to have a similar name to mine, but no habit of paying utility bills, apparently. Sorry to hear this!
11:01 AM, November 08, 2007

none said…
This is deja vu.

Liz Dwyer said…
Jen,
Gosh, I guess this is more common than I thought! I guess it's a good thing I didn't name my kids common names. It makes it less likely they'll get caught up in a case of mistaken bill-collecting identity!

Carrie,
Ok, put the crack pipe down and s-l-o-w-l-y step away! I will blog talk about you till you call some of these people and give them your correct phone number!

(Gosh, I love having a crazy sister. I really do!)

Hammer,
No way! I came over and read that and CRAZY! A year...ugh. I am going to try Malik's approach and see if that works. But I have gotten those calls that want personal information to speak to a rep. Like you, I have none to give.
12:42 PM, November 08, 2007

nyc/caribbean ragazza said…
I have bill collectors calling me at home for someone with my last name but a different first name.