Blowing Kisses to the Wind 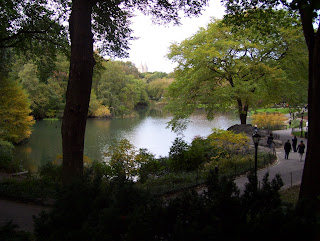 Ten years ago, I lived in New York. I loved the city, felt at home in it. But the wall to wall concrete sometimes grated against my soul.

After a couple months of living in Harlem, I found myself complaining about how even dogs were deprived of the opportunity to handle their business on grass. I hated how the location of every tree seemed planned. Flowers only grew in the window boxes stuck to the side of buildings.

Whatever connection with the earth I'd had back in Chicago had been replaced with the sound of my heels clacking on concrete. I missed the appearance of wildness, of nature just out of control.

A friend who'd been raised out on Staten Island told me to stop complaining. He said, "Just go to Central Park!" It made no sense to me. How could one patch of land make up for such a lack of green in the rest of the city? I was an absolute skeptic and did not go.

A couple more weeks passed and I kept complaining. My friend decided to drop everything and take me himself.

The first time I went, it was a November day similar to today. I found myself sitting in the grass, feeling the crispness of the air blowing through the trees. I watched young lovers walking along shaded paths, holding hands, oblivious to all else but their beloved. I realized that my friend, in all his generosity, was hoping to be more than just friends.

Central Park is a beautiful place for reflection and for realizations. Yesterday, just before dusk, I walked along the south end of the park. I felt such a longing to just go and sit in that grass once more. I wanted to just sit in nature, feel my heart beating and blow kisses into the wind.

Alas, time did not allow and I found myself walking over to Columbus Circle and then riding a packed #1 train headed Uptown, squeezed against perfect strangers, bodies touching but still avoiding eye contact of any kind. It was so crowded that when the train lurched and people lost their balance, they were held up by the bodies around them.

There is something incredibly comforting about that crowdedness, that human contact, even in all of it's anonymity.

My time in New York City has flown by and I'm now sitting at LaGuardia airport, headed back to Los Angeles. Danny Glover is sitting across from me reading a magazine. It's sort of funny but it definitely doesn't seem like the guy sitting on his left even knows who he is.

Oh, let me take that back.

Someone just came up to Danny and asked him for an autograph. Now the look on the face of the guy sitting next to Danny is like, "Oh, you're not just a black grandpa looking guy, you're Somebody!"

Isn't that funny how folks will treat you different when they think you're Someone. Now Danny's getting mobbed by folks who just want him to sign whatever piece of paper they have hand.

Anonymous said…
I'm headed to NYC on the 15th for the weekend. I need rejuvenation. So, I'm going to hit the Whitney Museum for the Kara Walker Exhibit, go see The Color Purple on Saturday night and just hang out. What's the weather like? Boots and such... I'm such an L.A. girl, I hardly ever get the chance to do seasonal clothing.
6:52 PM, November 04, 2007

Malik Akbar said…
I lived in Manhattan for a year, and the lack of greenery was definitely something that weighed on my soul, being a South Carolinian and all. But it's funny how the subways, of all things, grow on you. The routine and the rhythm and the people get into your blood.
6:56 PM, November 04, 2007

Liz Dwyer said…
Joy,
You are going to have a fab time. I definitely wore boots and a coat the whole time I was there. I was never too hot! The Kara Walker exhibit is going to be very cool.

Malik,
They do get in your blood. Absolutely do. They take on a beauty all their own which isn't replicated anywhere else in the world.
2:18 AM, November 05, 2007

Being a native New Yorker, I always thought of a park as a big open space with lots of concrete but no buildings. (lol)

I worked at LaGuardia for a while. My first job at the airport was being a security screener. It was the most boring job I ever had, except I met a lot of celebs. I had a little notebook that I kept with me to get autographs. I met some really amazing people.

I wonder what ever happened to my little autograph notebook?

nyc/caribbean ragazza said…
your post made me homesick. (although I don't really miss taking the subway during the summer)
7:04 AM, November 05, 2007

Liz Dwyer said…
MDC,
That's true, the park does have a lot of concrete! That's a really good observation. And I'll bet you got to see lots of celebs at that LGA job! I hope they behaved themselves while going through security.