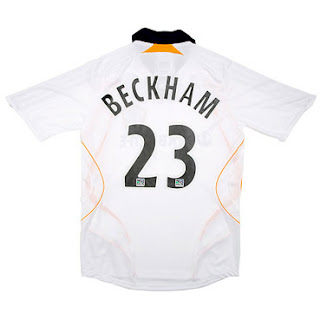 I think I'm in love with soccer games.

I had a great time at last night's Chivas USA vs. LA Galaxy game. Yes, I saw the $250 million dollar man running around on the field. Three cheers for binoculars!

He was looking good at the beginning, but by the end, I felt a little bit bad for Beckham. The man comes back from Europe, plays for the entire 90 minutes of the game, plays so hard that he looks like he's going to die in the last fifteen minutes, and his team still loses.

Yes, Becks and his Galaxy team got killed by the Chivas, 3-0. I found out pretty quickly that the Chivas are actually also an LA team. They even share the stadium with the Galaxy. Apparently, the two are huge rivals. (Who knew?) But, regardless of whether folks were there to root for the Chivas or for the Galaxy, everybody was there to root for David Beckham.

Anytime the man even came close to the ball, the 27,000 people in attendance, including moi, would start screaming their heads off. And if his foot actually made contact with the ball, we were out of their seats, just going crazy. I'm not a gambler, but I'd bet money that half that crowd had no idea what was going on in that game, me included. It didn't matter though because when Beckham did a corner kick, everybody in there, Chivas fans, Galaxy fans, the vendors selling churros in the stands, I mean EVERYBODY just went nuts.

And yet, he didn't score. He had a bunch of "almosts" (I think I counted seven) but none of his goals went in. As for the rest of the Galaxy team, it was like those guys had taken some muscle relaxers before the game. Becks would hook his Galaxy teammates up with great passes and I swear, they sometimes seemed shocked that he'd kicked the ball to them.

The first half went down scoreless on both sides but right before the break, some Chivas player fouled Beckham. It looked pretty deliberate...and wowzer, Becks totally lost his temper and rolled up on the Chivas player like he was gonna open up a can of whupass on that guy. Some other players restrained him, but what ensued was total mayhem on the field and two players, one from each side, ended up getting booted from the game. I was left wondering if I was watching soccer or hockey.

During the second half, the Galaxy thought it was nap time. So, at the 59 minute mark, the Chivas scored. And that's when I realized I was sitting in a Chivas section. 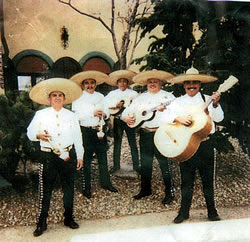 red clothing around me, but I just hadn't connected the dots yet. After all, I wore a red sweatshirt because red's my favorite color. But, if I thought I'd seen craziness before, it was nothing compared to the mayhem that went down when a goal was scored. Folks were throwing streamers, setting off fireworks, and tooting these little horns. I won't even get into the fact that there were fully dressed Mariachi bands at the game, playing in the stands.

The three Latino brothers behind me were dressed in head to toe Chivas gear, singing songs and jumping up and down chanting, "Chee-vaas! Chee-vaas! Chee-vaas!" And I'm not talking about just a small hop. No, I mean, both feet coming up and down like there was no tomorrow. When the Chivas scored, next thing you know, I'm in a man-made earthquake because these guys went totally crazy!

They were a nice contrast to the white folks sitting in front of me who were all, "Great, somebody scored. Honey, can you pass the nachos?"

The Chivas scored again nine minutes later. And the Galaxy just went downhill from there. With ten minutes to go, Becks was limping around the field. I could see the pain on his face but he, unlike his teammates, kept trying to chase the ball. There wasn't much he could do though and the Chivas scored yet again with three minutes remaining. By this point, I couldn't help myself. I was jumping up and down with the rest of the Chivas crowd.

The crazy thing I saw at the end of the game was that even though the Chivas won, the cameras didn't follow them at all. Instead, the cameras and reporters were all over Beckham. He just kept on walking though. Anyone could see from his face that he was in pain and didn't feel like talking.

He got criticized in the LA press for that. I suppose folks feel that if you're getting paid $250 million dollars over five years for salary and endorsements, you better talk to the press. Especially when other players, like the goalie, are getting paid around $35,000.

Hmm...I wonder if the other players resent Beckham's celebrity and salary? I mean, no one else's jerseys are getting sold for $99 dollars.

Then again, can they really complain when the average starting salary for a teacher is around $31,000?

But alas, that's our world, full of extremes of wealth and poverty. Despite it all, I can't wait to go back and see Beckham the Galaxy play again.

Liz Dwyer said…
1969,
Why, thank you for the compliment. All my friends were laughing at me because I was taking notes on what was going on. I'll be doing it again when I'm at the Notre Dame home opener next weekend...where I'm sure no churros will be served. ;0
4:52 PM, August 24, 2007

Anonymous said…
That was a fantastic irreverently funny take on a football, (soccer) game! You should be a soccer journalist giving the world feedback from the average laypersons perspective.
There is a fantasic salary in it and perhaps you should do your own fanzine from a "real fans" perspective. Fanzines are very popular in England, they give a different angle on the topic, usually funny and more relevant than the corporate programmes sold pre match!
Keep it up, we need the mother earths perspective on this new age religion they call soccer!
1:23 AM, August 25, 2007

Miz JJ said…
That sounds like so much fun. Live sports feels so raw and intense!

I dated a baller who said if teachers could bring in the same "revenue" he brought in then they could get paid more. That relationship did not last long.
6:29 AM, August 25, 2007

owenandbenjamin said…
The LA Press and alot of American fans don't understand that soccer is different then other sports like baseball regarding a players obligation to their national team. They are regularly called up for duty on the national team.

yes, this was just a "friendly" against Germany but these international games are always important, especially against a rival like Germany.
7:27 AM, August 25, 2007

Jameil said…
some are resentful and some are just excited for the inevitable attention and exposure. churros?!?! i luuuuuuurve churros!! and you made that sound so exciting!!! whooooo!! my little sister used to play soccer. there's really not a whole lot to understand. certain players can't go past certain points. kick and try to score. it won't happen a lot most of the time but with becks on the field, who cares!?!
6:07 PM, August 25, 2007

Liz Dwyer said…
Anonymous,
I need to find a sponsor to finance my soccer going habit if I'm going to be a regular attendee at the games! :) I can see the need for a fanzine. I found one of the official programs left behind on the floor and the team propaganda in there is really funny.

Miz JJ,
See, that's just the essence of ignorance right there. He probably really believed it, too. Glad you didn't waste too much time with him.

Tornados28,
I wonder how the Galaxy will choose to deal with this national team thing ongoing given how tired Becks was. One thing that could definitely help would be to get him some teammates that don't crumple so easily. After all, one star doesn't make a team.

Keith,
And here I was thinking those chivas had something to do with goats! What do I know?

Jameil,
It was a really fun game! I'm sure I'll learn more about soccer very soon since I signed my six year-old up for it. He starts playing in a couple of weeks. And the little dust-up they had has been all over the news. It was even on MSNBC...that and the pictures of Posh yawning at the game.
6:48 PM, August 25, 2007