Everybody Comes To Hollywood 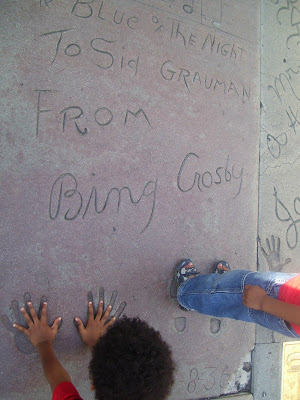 You ever notice how you can live in a city but never really take advantage of any of the cool things that tourists from around the world pay big bucks to come and see?

For example, when I lived in Chicago, I only went to the top of the Sears Tower once. In NYC, I spent a lot of time people-watching in Times Square, but I never went to the Statue of Liberty. And in neither place did I do those cool boat cruises. I get violently sick on boats. It's not pretty.

Here in LA, I live a hop, skip and a jump from the Grauman's Chinese Theatre and Hollywood and Highland (where the Oscar's are). I never go over there. I suppose it's like taking your own city for granted in much the same way we can take the loved ones we see every day for granted.

But this afternoon, I decided I was going to take my two sons over there to hang out.

Well, I was talking with my kids about Batman and I knew there's a guy over there that dresses up like Batman. I told the kids we'd go see Batman and then they could ask him personally if he sleeps all day and stays up all night.

"Like a Dracula... or like Mommy," as my eldest said. Ahem, yes, except Mommy doesn't sleep all day, even if she stays up all night.

Sooo, we started out our adventure by taking the subway. After a short argument about whether or not we were going to be riding Thomas The Tank Engine, the ridiculously excited boys made a bit of a spectacle of themselves on the subway platform with their shouts of, "The train is coming!"

We exited at the Hollywood and Highland stop and took the three escalators up to the street level. As we emerged into a sea of cameras flashing and street performers, my eldest son took my arm and very seriously said, "Now mommy, we have to watch out up here because there are a lot of bad criminals and thieves. They're going to try to snatch your purse!"

Surprised, I asked him how he knew this. He gave me the, "Duh," look in response and told me that it was obviously a, "den of gangsters." He then paused dramatically and said the words every damsel in distress is waiting to hear, "Don't worry. I'll protect you."

My youngest was sure to clarify, "Not me. I'm too little."

Armed with that knowledge , we first wandered outside of Grauman's Chinese Theatre. I got to find out that Joan Crawford had really really small hands and feet. 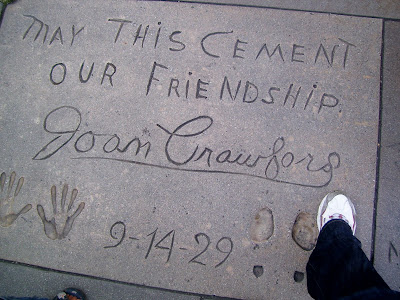 The kids put their hands and feet into the imprints of Bing Crosby, Jean Tierney and Cary Grant. They also got to talk to and take pictures with Batman, Captain Jack Sparrow, Superman and Supergirl.

Clearly, at three dollars per picture, Captain Jack is making a nice chunk of change. I don't hold it against him though. After all, he's probably paying too much in rent and playing Captain Jack might be his deepest wish. So good for him for following his dreams.

Sigh. I'm such a hopeless romantic.

In any case, after some quality time in the Virgin Mega Store - mega because they sell more music paraphernalia than music?- it was time to head home. We took a taxi instead of trying to brave the subway, and the walk home from it, at 8:00 at night.

And then we saw the footage about the tragedy in Minnesota. It is so sad and so heartbreaking. But, it also made me appreciate that I'd spent time with my sons and that we'd had such a wonderful time.

You never know how your life is going to change in an instant and whether or not you'll get the chance to do the things you keep saying you want to do, with the people you want to do it with.

Ian Lidster said…
Loved traveling with you through the streets of 'your' town. And yes, re the bridge tragedy, your words are so true and a poignant reminder to 'carpe diem'
Ian
12:48 PM, August 02, 2007

Liz Dwyer said…
Velvet,
It was really fun! The kids keep talking about how awesome it was. They wanted to go again this afternoon, but we settled for an equally enjoyable stroll around the neighborhood. There were a lot of cats out and about so they enjoyed themselves immensely.

Ian,
Glad you came along for the virtual trip. LA has so many cool things to do so I want to take advantage of all that this place has to offer. I probably won't live here forever and I don't want to leave thinking that I didn't really enjoy this city and our time here like I should have. Carpe diem, indeed!
8:55 PM, August 02, 2007

Liz Dwyer said…
Angie,
I know! Some of the things he says are so over the top funny that I want to straight up laugh...but he takes himself very seriously so I know he'd be offended. Yeah, he's six and wishing he was sixteen. He told me he wants to be a teenager so he can play "rated T" video games. He then wanted to know if growth hormones will make him turn into a teenager faster, and if so, can we go to the store and get some.

heartinsanfrancisco said…
You are so right. We all need to be reminded regularly not to take each other and our life for granted because everything can change in a second.

Your day sounds like so much fun! I'm glad you were so well protected in that den of gangsters.

We go to tourist attractions in SF and take pictures, and when merchants ask "Where are you folks from?" we say "The Marina."

Liz Dwyer said…
HISF,
When the vendors asked where we were from, I felt so cheesy saying...oh, right down the street! But at least it meant that the $$ hustle got toned down a little bit.
1:16 AM, August 07, 2007

Did you do the pics of Bing Crosby and Joan Crawford on purpose?

Liz Dwyer said…
Hammer,
No, I just picked those two because I loved both so much growing up. I grew up watching old movies and Joan Crawford and Bing Crosby are two of my favorite stars from the 1940's era. I didn't know Bing Crosby had a "Mommie Dearest" book like Joan Crawford. That's too bad.
8:18 PM, August 07, 2007