It must be something in the air. In the eight years I've been in this city, I've never seen it rain on May 21st. Yet, through my window, I hear the unmistakable hiss of rubber tires sliding across a rain-slicked road. I hear the pattering of rain hitting leaves and sliding earthward to gurgle along the sidewalk.

I've been hearing other things as well. No, nothing like that. I don't need some sort of medication for voices in my head. Or, at least not those kinds of voices.

My building is L shaped. I live on the short side of the L. On the long end of the L is a couple that moved in about six months ago. She's a twenty-something white woman with greasy brown hair. She dresses in that boho style (but without the word "chic" included), and posseses an air of lethargic depression. She smokes. In fact, we probably wouldn't know what she looks like at all except for the fact that we've passed her quite a few times when she's been outside, sitting on her steps, puffing away on cancer sticks.

He is probably bi-racial and is on the short side. He wears glasses and has a slight gap between his front teeth. I've only seen him three or four times, and he's always worn the eastside wannabe hipster outfit de rigeur: jeans and retro slogan t-shirt. Every time I see him, he seems nice, but there's something, a nervousness about him that makes me wonder. It makes wonder exactly what is going on with them. They are a couple that doesn't seem like a couple. I couldn't guess that the word love comes into play with them too frequently.

Anyone who's ever lived in an apartment building knows there's not really a ton of privacy. The soundproofing isn't so bad that you can hear through walls. You remember memories from college of some girl on the floor of your dorm screaming at two a.m, "Yes! Don't STOP!" Our walls are a bit thicker than that, but it's like that old Til Tuesday song...voices carry, especially when it's getting warmer and people are beginning to leave their windows up. Everyone can hear your business when your windows are up. At night it can be very quiet around here. Noises travel with the clarity of a church bell. This is not always a bad thing. I'm a writer so I like to eavesdrop on the stories and lives around me, listening to both the eloquence and distress of the human condition.

Last night, there was no eloquence to be found. This couple had a full-on argument that folks that live two blocks away probably heard. When Elarryo and I got home after 11 pm from the fabulous wedding of Mr. and Mrs. Tim Starke, we heard the beginnings of the argument. We eavesdropped for awhile. But, by midnight we had grown tired of the ongoing back and forth of the argument. There were only so many times I could hear her shout, "I hate you, you f-ing asshole" before I grew bored. Plus, we couldn't figure out what they were fighting over.

-There was no, "I saw you out with ___! Don't even try to deny it." So it seemed cheating was out as a reason.
-I didn't hear her say, "How could you spend our money on that, you jerk!" So money was out.
-"We haven't had sex for six months!" Nope, didn't hear any talk of sex at all.
-Nor did we hear, "You are such a slob! You leaves dirty dishes all over the place!"

So what were they fighting about? I stopped caring and went to snuggle on the couch to watch Mr. & Mrs. Smith. As an aside, can we discuss the sheer level of magnetism between Brad and Angelina? 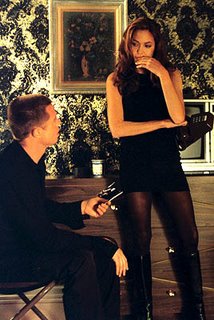 I'll say it again, Jennifer Aniston clearly didn't have a chance. And, if there wasn't a spiritual commitment between me, Elarryo and God regarding the sanctity of our marriage, we both agree that we'd each be trying to leave the other for Angelina.

After a certain point, all the cussing next door ceased and I figured someone must have either stormed out...or they were having the mythical "make-up sex" -- which I never understand since I can't figure out how you cuss someone out and then fifteen minutes later...but I digress.

Fast forward to nine-o-clock this morning. That's right folks, louder than ever: the shrieking, the cursing, the throwing of objects, the slamming of doors, the threats, the demands for the other to, "Pack your stuff and get out!" I hung my laundry on the line outside while debating whether or not someone needed to go tell them to just break up and be done with it. My neighbor that lives underneath me came outside and was contemplating calling the police. She was very distressed by the whole thing. She was worried about the "inappropriateness" of the argument and that domestic violence was taking place.

This led me to this very interesting question...I was annoyed by them being so loud. I thought they were engaging in alot of unecessary drama and hysterics. Sure they were inappropriate. But I realized I was seeing the whole situation as more of a curiousity than anything. Chances are, no one woud get murdered and chances are, we'll see them holding hands in a week. Elarryo pointed out to me that if most times, if you grow up in a household with alot of drama, with alot of yelling and carrying on, then you develop a numbness to it, a hardness that you have to work against.

Finally, we heard a final, "F#$& You!" from her and heard a door slamming. The neighborhood was once more quiet in it's sleepy Sunday morning haze. Until tonight. This time, our neighbors across the hall were going at it.

It has to be the rain. Or rather, I'd like to think it's the rain. The truth is, of course, so different. So many relationships are like a house of cards... you pull one thing, if one thing goes wrong, the whole thing falls apart.

I'm going to go get some rest...sleeping on a rainy night is a treasure this late in the year in Southern California. Perhaps the rain will wash away the unpleasant residue of the harsh words that have been said.

Phillipe Copeland said…
Hey I like your blog. You're witty as they say. Thanks for leaving a comment on mine, consumer culture does get them young. Spiritual parenting in our society which is rotting from the core has become a revolutionary activity.
I'll be reading you're stuff regularly, you're a great writer.
3:58 AM, May 22, 2006