"Four is the perfect number for a pop group. Five is too many and three just looks stupid". Martin L. Gore 1985

Life in Los Angeles feels so...normal today. I got up and dressed myself in my new DM track jacket and set off for an internal day at the office. The morning was long and the afternoon felt even longer. There was so much hard thinking going on around me about what exactly it's going to take to close the achievement gap. So many furrowed brows and minds visibly whirling. After coming back from the Depeche Mode concert in Las Vegas, I was a bit underwhelmed by the minutia (and subltle arrogance) of it all. But I'll admit, when I joined Teach For America almost ten (oh snap!) years ago, I would get really annoyed when people would say, "This is going to be the most amazing experience of your life." Ahem. No, up to that point, going to see Depeche Mode in concert was in my top two. My number one was living in China. 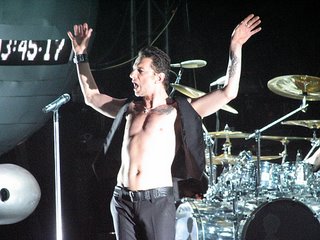 All day today I found myself smiling, thinking about Dave singing "A Question of Time" with that clock in the back behind him running down to zero. These lyrics felt incredibly fitting with today's momentous events:
"It's just a question of time
It's running out for you
It won't be long
Until you do
Exactly what they want you to"
Dave introduced Fletch by saying, "All the way from Basildon, Essex.... Mister Andrew Fletcher!" In case you don't know, Fletch is on the right, and Peter (back-up keyboards) is on the left. 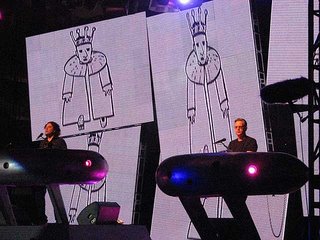 Now, Fletch is the epitome of a middle aged white guy, but he's still rocking it! How many of us will still be living our dreams when we are in our forties? How many of us will start living our dreams today? Courage, people. Courage. And a special shout out to Arod for living her dream and going to Spain. Speaking of dreams, it was surreal to be driving back to L.A. yesterday and be re-living the concert while hearing all about the May 1st "Day without an immigrant" marches and protests. Hmm...the only ones of us who technically aren't immigrants are Native Americans and Black folks. I mean, they were here already and we were forced to come here. So, should all the folks of Irish descent across the country have taken the day off? I mean, my relatives on my dad's side were immigrants. They just came through Ellis Island and all that good stuff. I told someone today that I'm going to immigrate to France. Bomb-ass vacation policies over there...and for real, can a sistah get a break?

Oh, where was I before I began thinking about immigration? Oh yes, I was reliving the really important things in my life, namely, the Depeche Mode concert. 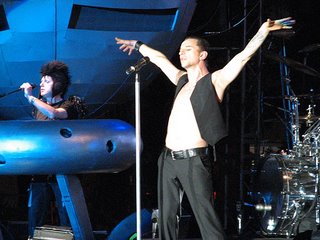 I really can't remember which song this was in but Dave and Mart were so in harmony with each other. It was so poetic and full of feeling. I would have waved my arms along with Dave, but I was so smashed between other people, I couldn't move my arms much at all! I have lots more photos to post but I'll look through and publish them tomorrow!
Email Post