Ladies and gentleman, I present to you, the man with the wings, Mr. Martin L. Gore." And the crowd goes absolutely bananas. Myself included. 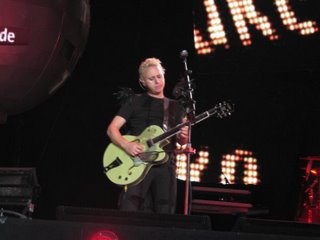 Anticipation is such a sweet thing, and now, after months of unadulterated dreaming and imagining, my Las Vegas-Depeche Mode experience has come and gone. General Admission/Standing Room Only worked out very well for us. We ended up being up in the 3rd to 5th row back, depending on pushing and shoving. Someone passed out from exhaustion...we moved a little closer. Someone vomited all over themselves...we moved a little closer. I was close enough to actually be able to take pictures with my camera and have them turn out fairly well! Martin perfomed "Home" and "Blue Dress" which were both astoundingly amazing. I've never been so close to the stage that I could see him actually strumming the guitar with his black-painted fingernails....see both his and Dave's eyes and eyeliner without the aid of those gargantuan screens...and blow Fletch kisses and have him actually smile at me! Here's the interesting thing: when you are that close, you lose any awareness of those screens.

I should back up and tell you all: E and I left our friend Kye's house and drove to the Hard Rock at around 3:00 in the afternoon. We parked at the Alexis Hotel, right across the street and went to line up. There were maybe 60 people in line before us. Not too bad. We had a great time talking to folks while we were waiting in line. Shout out to Tabitha, 1/2 black and white and is married for two years...Liz, who's Persian and exploring Zoroastrianism, and Travis, who hates the Bears! They were good people and they helped the time pass! At around 5-ish, they let us move to a holding pen where we could use the port-a-potties...not bad when they haven't been used AT ALL yet. E bought us some Red Bull and before you know it, I was reenergized! Then this freakish fifteen minute windstorm popped out of nowhere...the sky turned black and the wind started blowing so hard, the port-a-potties started moving. Fortunately it ended just as quickly as it started. While we were waiting to get in, E bought me the super-cool track jacket, so now we each have one. And finally, it was time to go in, at around 6:45.

She Wants Revenge opened at 7 and were a bit underwhelming. They weren't bad. It's just that they played it so cool. They all looked bored. What can I say, they're from Los Angeles. They haven't learned yet that you can't just step on stage and scowl. Justin Warfield, their lead singer, lectured the folks viewing the concert from their hotel rooms on their being worse than downloaders. "You should be down here with these people who paid to see Depeche Mode."

After SWR ended, the owner of the Hard Rock came out and said Depeche Mode was his favorite band. (Because they sold out the place.) Then we had twenty minutes of getting to listen to Mart's excellent pre-show dj set and having these ridiculous bimbos try to hustle their way to the front, "Oh, excuse me, I'm just trying to get to my brother up there." Yeah right, there was no way anybody was gonna get by us. In the meantime, I had a great time talking to some other lovely ladies from Los Angeles and we all screamed like crazy when the band finally walked out on stage. I found myself wondering, aren't the boys just a bit tired of wearing the same outfits for the past six months? I mean, Mart's still wearing his weird hat, the black leather skirt over the pants and the black wings. Not that I mind...I absolutely love the look, but I wonder if he's tired of it. 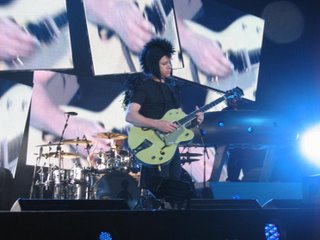 Dave is still wearing his gear from the clothing company... I suppose it's different if you only wear it on stage. But I digress...the show absolutely ROCKED. Again! Not a surprise there. I LOVED that they played "Nothing's Impossible". Absolutely beautiful. In the first encore, Martin performed "Blue Dress" which was a complete tear-jerker. They also played "Photographic"...Dave intro'd it by saying, "This was the first song we recorded!" And then it jumped off from there. They were clearly enjoying playing it and it was a telling moment in the crowd...the die-hard fans (like moi) knew the lyrics and were going nuts. The polite fans, like my husband, listened and rocked along. The fake-fans used that moment to text message someone to brag that they were at the show.

And so, this chapter of Modeness is beginning to draw to a close...I have been a fan of DM since I was eleven. I feel like they've always been there, through almost every momentous stage of my life. If everyone I knew wouldn't have been absolutely horrified/scandalized, I would have had "Strangelove" as my first dance at my wedding. Seriously, I'd like to have "Home" played at my funeral...but let's all hope that's years in the future!

It's been a fantastic trip and the show was pure magic (even if my feet hurt like hell!) and I thank God for giving me the $$ and the time to see the boys from Basildon once more.