The one time my family ever went to the beach together when I was growing up was a trip to the Indiana Dunes. I was probably seven or eight years old and it was my first trip to Lake Michigan. My teenage brother and sister were in the water, and so was I, enjoying the warmth of the lake.

There were dead fish floating in the water with us.

I picked up one of the fish and threw it at my brother. He is, or rather, he was, nine years older than me. Despite our age difference, he screamed like he was being murdered, jumped out of the water and ran to tell on me. My punishment was that for the rest of the afternoon, I had to sit on the blanket my mom had spread out on the sand. She was angry that I had thrown the dead fish in order to antagonize my brother. It was an awful thing for me to do. However, I never heard her express outrage that there were dead fish in the lake.

Off in the distance, the smoke billowed from the steel mills and factories that were directly west, in Gary and Hammond, on the southern edge of the lake. We thought all the smoke looked cool. It billowed and puffed in lovely white and yellow-tinged clouds before dissipating into the air. Although we could barely see downtown Chicago through the haze, at the time, we didn't think anything of it. There was no link in our minds between pollution and those fish dying.

Now, I live in Los Angeles, smog-central. Here are a few things I've noticed about this place:

It's easier for me to think about all the things I absolutely love about Los Angeles instead of the fact that I try to pass the smog off as being the "marine layer". Of course, this issue is bigger than what we are doing here in LA. Despite what we're led to believe, it's bigger than the Brangelina baby being born today and being a top headline on msnbc.com.

I got home about 45 minutes ago from seeing "An Inconvenient Truth" over at ArcLight in Hollywood. It's a documentary featuring Al Gore's work that is also accesible through his book of the same name, and it's about what's happening to our environment, specifically, about the causes and effects of global warming. Maybe "good" isn't the right word to describe the film. Eye-opening. Shocking. Thought-provoking. Terrifying.

I didn't know before I saw this film that Lake Chad in Africa is almost gone. Dried up. If you are thinking it's a small lake, no, it used to be about half the size of Lake Michigan. Or, if you prefer, just imagine Lake Erie disappearing completely.

Or how about glaciers disappearing: 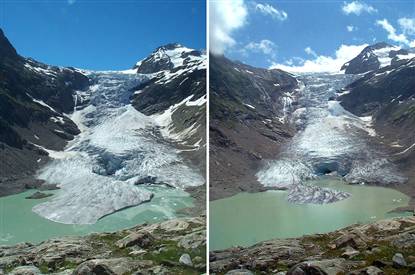 This is the Trift glacier in the Swiss Alps. The image, courtesy of the Swiss Academy of Sciences, is featured in the film. The image on the left is 2004. On the right, one year later, 2005. In case you think this is an anomaly, 84 of 91 glaciers retreated in Switzerland. Ski resorts in the Italian Alps are closing due to lack of snow. In the film, they don't just compare images of places from year to year, they show pictures of the Colorado River 30 years ago and then now.

Not enough for you? Oh, how about Greenland is melting. And both poles. As in the North Pole and the South Pole.

Regardless of whether you voted for the man or not in the presidential elections, whether you believe in global warming, or think it's an obsession for tree-hugging lunatics, I do think we all have the responsibility to independently investigate the truth and then judge whether Al Gore, and a boatload of scientists, are full of it.

And it's that "or not" that is especially frightening.
Email Post

Anonymous said…
Did you know Samir and I were in the audience of this taping? I was shocked to my core...Al Gore is actually charming in real life! No really, I'm dying to see the final product. Miss you!
11:17 AM, June 01, 2006