Things Not to Say to a Black Woman: Your Hair Looks Like a Bird's Nest 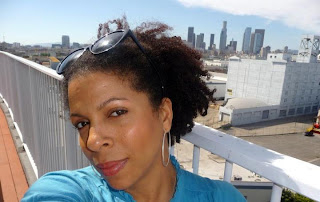 "It's a good thing you're not sitting on a park bench," said a grizzled white guy in his mid fifties as he sidled up to me at the Hollywood YMCA. I wasn't sure where he was going with his statement but I wasn't exactly feeling sociable. Thanks to pain in my Achilles tendon I'd just gotten off the elliptical machine after less than a minute. My doctor gave me the smackdown on Friday and told me I have a severe case of tendonitis and banned me from running for at least 6 weeks. It's no joke, I may have to wear a boot and the doc told me that if I ever want to run again, I need to take the injury seriously.

This is not the kind of news a marathoner likes to hear. I cried several times on Friday and I was so depressed, I came home from work that night, took some sleeping pills, told my kids not to burn the house down, and was in bed by 8 PM. By this morning I'd convinced myself that elliptical machines aren't running. Heh. The pain wasn't severe but I knew I should stop.

Think about the last time you were in a seriously hopeless and angry emotional place. That's where I was when Mr. "It's a good thing you're not sitting on a park bench" rolled up on me. Was he trying to make a crack on me getting off the machine after a minute? Was he trying to say I was lazy?

I didn't have to wait too long to find out where he was going with his comment because he kept talking, saying, "Your hair looks JUST LIKE A BIRD'S NEST and the birds might come lay eggs in it or shit in it."

What the #^(&???? Yes, my hair is big and curly--and I love it. It was also pulled back off my face in a ponytail, kinda like it is in the above picture, because I was at the freakin' gym. To this guy, that's a bird's nest.

He thought his comment was funny. He started to laugh after he made it and looked at me like I was supposed to laugh too. I wanted to attack him. Kick his teeth in. Bite him. I had such an adrenaline rush to hurt him...but I just stood there in silence and gave him The Look--you know what look I'm talking about. He was completely oblivious. He just kept laughing and after a few more seconds he walked away, still laughing to himself.

All day I've wondered whether there was anything I could've said that would've helped him understand that his comment was unacceptable. I don't think so. Yes, his comment was rude, but racism, not mere bad manners is what's at the crux of this willful ignorance about and disdain for black women's hair. Even if I had been super nice about it and said to him, "Gee, that's actually not very polite to equate my hair with a bird's nest and it hurts my feelings," he'd still walk away believing I'm the one with a problem.

Indeed, I've learned from previous experiences that white people who make these kinds of comments about my hair--like asking if I'm terrified of water--think they're doing me a favor by even deigning to notice me. They think they're paying me a compliment, and when I'm not obsequious and fawning, I'm, as I've been called before, a "bitchy black woman."

I don't know what the answer to this is, but a piece of advice to America: If you think you're making friendly small talk by telling a black woman her natural hair looks like a bird's nest, just swallow the words in your throat before you speak. Otherwise, one of these days you might come across someone who isn't able to tamp down her anger.
Email Post
Labels: Hair natural hair racism Running YMCA

Annette said…
I got this ALL the time as a kid. My hair had reached a point where relaxers wouldn't take. Usually from other black girls. I think I may have called theirs rat's nests or pickaninnes. I know, not helping.

To a white man I probably would have been as equally rude and told him that I hoped a bird shit on him since he obviously looked like ... I dunno, a tree.

SMH said…
This person is so not worth the brain cells it would take to come up with a response; stupidity this profound leaves a healthy intelligent person breathless. Let's just hope it did not breed. Your lack of response merely means you are smart enough not to waste a minute on someone so not worth the space they occupy. Forget this oxygen thief. Unfortunately the world has quite a few of them.
6:14 PM, August 19, 2012

nick said…
What SMH said. Someone that stupid wouldn't listen to anything you said, no matter how sensible. He has an idea in his head and nobody but nobody is going to change it. He clearly has a birds nest for a brain.

Sorry to hear about the tendonitis and the ban on running. Very frustrating. I hope you can get your Achilles tendon sorted out.
2:43 PM, August 20, 2012

I'm going to assume he was mentally disturbed.

Who says something like that? If he had said just the lay eggs part, I would think okay, still side-eye worthy, but the shit comment? And then he laughed.

Val said…
I would have gone to the club management and made a formal complaint. It's not that I would have given a darn what he thought but if I'm paying to be there then I do not expect to be verbally abused.