Racism and the Media's Diss of Gabby Douglas 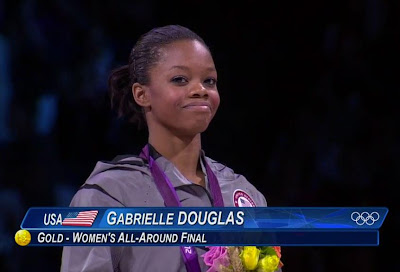 Earlier today after I found out that 16-year-old Gabby Douglas had won gold in the women's gymnastics all-around final, becoming the first black woman--the first non-white woman, period--in history to do so, I posted on my Facebook page: "Going into the Olympics, all I heard about was that Jordyn Weiber girl and how she was the best gymnast of the fab five. Will we see the American media go effin NUTS over a 16-year-old black girl who just kicked ass and took names? And will some of my sisters PLEASE stop dissin the gal's hair?"

Across the web I've seen those complaining that Gabby's hair isn't impeccable get a sound smackdown. As for the U.S. media, my local NBC station spent several minutes waxing poetic about swimming--yo, Ryan Lochte and Michael Phelps are awesome!--how a local rower won gold with the women's rowing team, how so many people are watching the Olympics that Netflix traffic is down, interest in archery is way up thanks to the Hunger Games...and a brief mention of Gabby's win. Seriously, I nearly blinked and missed it.

Is the sports guy going to devote a full minute to Gabby later in the broadcast? Doubtful. We're already on to how weed shops in LA have 30 days to shut down. As my friend Mark commented this afternoon:


"Probably some people won't like this but I'm white so I'm gonna say it. The real spoiler is that the media keeps focusing on the (white) girl who didn't win. I feel bad for Jordyn, really. After all, she was the world champion and she didn't get the gold medal for which she had worked incredibly hard. But she did get one gold... and now we have a new American champion who's won two golds... so far. Time to celebrate people. And by "people" I mean NBC."

I'm sure plenty of other stations around the nation treated Gabby's win in the same "oh by the way, that happened but moving right along" kind of way. Come again about us living in a post-racial society?
Email Post
Labels: Gabby Douglas Olympics racism

Carolyn (Diary of a Sewing Fanatic) said…
I didn't get that on my local news. There was an interview with her during the sports segment. And the internet was ablaze with her win. I got notifications from CNN, The NY Times and my local station as soon as she won. This may be a regional thing. As for the hair controversy...I just refuse to go there. The girl just won 2 gold medals in the Olympics the hair thing is just not a conversation worth having...priorities people!
6:32 AM, August 03, 2012

Liz Dwyer said…
Cmarie12
Glad your local news had it together because ours did not. The internet media was talking about her yesterday--after her win. Going into this games she was an afterthought--remember how we had to endure the stories of Jordyn Weiber crying without them really talking about who had actually qualified. Sigh.

Toni Campbell said…
I'm not watching the Olympics, so I get the bulk of my updates from Facebook and fortunately my friends reports are very Gabby-centric. But, wait, LA weeds shops have 30 days to close? That's the real tragedy.
8:55 PM, August 07, 2012