'We Built It' Is Getting Old. Also, What Are Romney's Specific Plans? 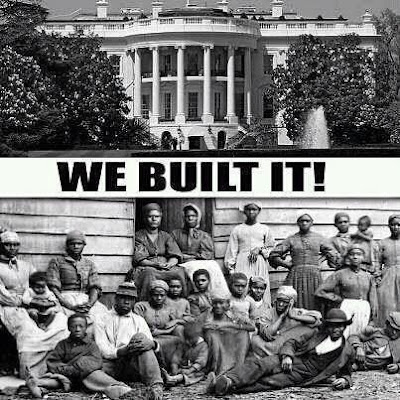 I love the Republican National Convention's theme "We Built It'. Clearly it was inspired by the slaves who built the White House, right?  That's why I'm so confused about why none of the convention's speakers have referenced the hardworking men and women--Americans who toiled day and night for to build America--who happened to be slaves.

We've heard a lot of 'pull yourself up by your bootstraps' kinds of stories, but not much acknowledgement of the people who pulled themselves time and time again, only to be beaten down and have the boots, the straps, and any tool that could be used to pull stolen.

You know what else is odd? After night two of the Republican National Convention I still don't have a clue what Mitt Romney's specific plans for improving America actually are. However, I did hear plenty of bizarre lies coming from the stage. Thanks to the information age it's not hard to independently fact check the whoppers these folks are telling. Also, have they forgotten about the Ten Commandments? I was half expecting a lighting bolt to come through and strike Paul Ryan.

Heck, maybe the truth really doesn't matter to them anymore. As long as attendees feel like they have a safe space to throw peanuts at a black CNN camerawoman while saying, "This is how we feed animals," it's all good. Hmm...maybe they threw peanuts at her because she pointed out that her ancestors actually DID build something.

I also wonder if these folks have never known anyone who died because they didn't have health insurance and couldn't go to the doctor. I know at least three people who've lost their mothers due to a lack of medical treatment. This essay by education journalist Audrey Watters about what happened when she was in a Ph.D. program and had no health insurance has had me choked up all day.  Read blog entries from my dear friend Erin Kotecki Vest who has been going through treatment for lupus. I'm not sure how someone can read their stories and be okay with every man, woman, and child not having healthcare.

As 8-year-old Mr. T noted when Paul Ryan started talking about repealing the Affordable Healthcare Act, "Wait, he doesn't want people to have healthcare? This dude sucks." His 11-year-old brother subsequently quipped, "Next he's gonna say 'May the odds be forever in your favor.'"

This may not be The Hunger Games (yet), but from the speeches I've heard, I'm not supposed to be my brother's keeper. I'm not supposed to put others and the good of our society as a whole before my own selfish needs. Individualism trumps everything. Only one of us can be the victor so as long as I got mine, who cares if you've got yours, right? You must not have worked hard enough or sacrificed enough.

Instead of encouraging Americans to put aside our differences to collectively build something together--something that brings people together--the speakers I've heard seem to believe living in a siloed society where shouting "I built that" from every tree top resonates.

How is that supposed to be inspiring to anyone?

What President Obama actually said which sparked all this we built it madness is this:


"If you’ve been successful, you didn’t get there on your own. You didn’t get there on your own. I’m always struck by people who think, well, it must be because I was just so smart. There are a lot of smart people out there. It must be because I worked harder than everybody else.Let me tell you something—there are a whole bunch of hardworking people out there. If you were successful, somebody along the line gave you some help. There was a great teacher somewhere in your life. Somebody helped to create this unbelievable American system that we have that allowed you to thrive. Somebody invested in roads and bridges. If you’ve got a business—you didn’t build that. Somebody else made that happen. The Internet didn’t get invented on its own. Government research created the Internet so that all the companies could make money off the Internet. The point is, is that when we succeed, we succeed because of our individual initiative, but also because we do things together. There are some things, just like fighting fires, we don’t do on our own. I mean, imagine if everybody had their own fire service. That would be a hard way to organize fighting fires.

Whenever I meet someone who acts like they got where they are solely based on their own merit and awesomeness, my bullshit detectors go into overdrive. Keep it real, if someone gave you a loan to start your business, you got help. If someone taught you how to write a business plan, or hooked you up with an awesome tax preparer, you got help.

I teach my kids to ask for help in school. What kind of message are we sending them when this rampant individualism is so celebrated? Why is admitting we need help to build a better society such a problem? And when is Mitt Romney going to give some actual details about what he'd do as president?

Rosita said…
My older son has asked us what we like and don't like about each of the candidates. It was easy to give that info on Obama - as we really like some things, but really don't like others.

For Romney, we had to tell him we don't like that he hasn't said what he is for, only what he is against and that is no way to run a country. Since he hasn't come out clearly for any policy, there isn't anything we can say we like about him either.

I totally hear about about the healthcare stance and the rampant individualism. I could write a lot more, but will refrain, with just an "amen" to what you said.
8:11 AM, August 30, 2012

Adam said…
Hi Liz ... I'd make a joke, but you know what the problem with political jokes are don't you? The sometimes get elected ;)

The republican ideology has long been "every man for them self, race to the top, winner take all." Their campaign strategy over the years has clearly emerged as "why tell the truth when you can spin a lie." You might fact check, but most people do not.

Or they can get on stage and say something like "Obama wants to take away your freedom, I want to restore your freedom!" Honestly I'm not even sure what that means. I do know though that under republican leadership (e.g. Bush/Cheney) we saw the greatest transgression of privacy and civil liberty of my day.

I'm not really so much an Obama defender ... he's a politician too, and they are all cut of a similar cloth in my mind. In particular his signing of the NDAA law this year is criminal, as it allows for the detention of a U.S. citizen without access to a lawyer if they are "suspected" of being a terrorist. So I lost a whole lot of respect for him since then.

But it is the hypocrasy of the republic party that cuts my nerves the most. They talk about fiscal responsibility - which I think is a good thing - but they will take the country trillions of dollars into debt to wage war. But then they cry fowl when somebody wants to spend money to help poor kids. Or they will say that government should stay out of citizen lives ... oh, unless it comes to who they can marry. And then they preach conservative family values as they point that liberal media has under minded the moral fabric of our society. And yet the outspend liberals 3-to-1 at strip clubs. (http://www.cnn.com/2012/08/23/politics/tampa-gop-strip-clubs/index.html) Go figure.

Erin said…
I just love your kids. They have an amazing Mom teaching them exactly what they need to know in this day and age.
1:59 PM, August 30, 2012

nick said…
I have no words strong enough to describe the lies and smears and complete garbage spouted by right-wing politicians who'll say anything to get votes. How right you are about the phoney stress on individualism, as if all the massive infrastructure of public services, private services, friends, neighbours, social networks, self-help groups etc etc simply doesn't exist.

What particularly annoys me at the moment is the idea that the people at the top are the "wealth creators" while the millions of people who toil away in factories and actually make things are supposedly producing nothing of value.
2:06 AM, September 02, 2012