No One's Offered My Child Sex, Drugs, or Alcohol (yet) 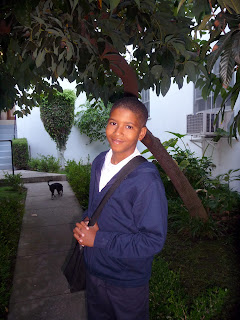 My fears about what would happen to my 11-year-old son in middle school have not come to pass. No one has pulled Mr. O into a corner and:

1. Offered him crystal meth.
2. Forced him to inhale from a crack pipe.
3. Told him that marijuana is harmless so he should stop being a baby and try some.
4. Dared him to do a shot of hard liquor and then
5. Showed him the flask they have stored in their backpack.
6. Texted him a picture of their boobs.
7. Asked him if he wants to play a kissing game.
8.  Attempted to unzip his pants.
9. Threatened to get him in trouble if he doesn't do all of the above.

However, a friend just HAD to helpfully remind me that it's only day two. "The kids are still on their best behavior," she said. "There's still a whole school year for all that to happen." Great.

What has happened, however, is that O has come home the past two nights with a LOT of homework.  He also says he feels pretty comfortable in class because everyone else is just a big nerd like he is. I love this nerds-so-busy-with-schoolwork-they-have-no-time-to-smoke-meth thing. The worst that's happened is some eighth graders cussed out a sixth grader for cutting them in the lunch line. "They were saying the F-word and everything," O told me.

If that's as bad as it gets, I might be able to deal.
Email Post
Labels: alcohol Drugs middle school Mr. O Nerds Sex

nick said…
Indeed, it's only day two, but I have a lot of confidence in Mr O's good sense. He's being brought up by a very sensible mum (and no doubt also a very sensible dad). And if they're all big nerds, I can't see anything too scary occurring.
6:07 AM, August 16, 2012