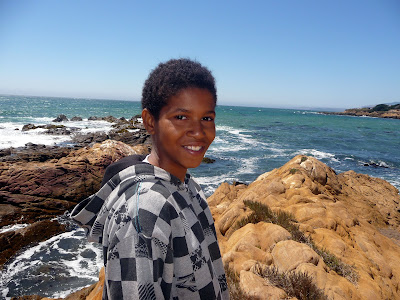 My 11-year-old son, Mr. O, officially becomes a middle schooler in an hour. He's playing it cool and says he's ready for his first day. He has a new haircut, has accepted he has to wear the required blue uniform pants and white shirt, and his new pencils and a couple of notebooks are packed in his backpack. But when I ask him if he's nervous, he simply says, "Nah, I'm good."

I nod my head and ask, "Are you sure? If you want to talk about anything you're worried about..." and then he tells me he's fine and can't wait to start school. Indeed, he woke up at 5:45 AM to get ready so I think he's genuinely excited.

I, on the other hand could write a book titled "The Los Angeles Mom's Guide to FREAKING THE EFF OUT Because Your Child Is Going to Middle School."

What's the problem, you ask? Pfft, did you forget how miserable middle school was? I remember how mean middle school kids can be--one minute you're cool and the next, no one wants to talk to you. I hate the whole popularity and peer pressure thing. I'm still scarred...sob! Goes to dial therapist...oh wait, it's 6 in the morning...oh wait, I don't even HAVE a therapist. Makes note to get therapist to deal with middle school parenting angst....

The thing is, if only popularity was the biggest problem facing sixth graders these days. I keep picturing some spawn of Satan-type kid luring Mr. O into a corner at lunch and trying to force crystal meth and shots of Jim Beam down his throat. And then Satan-boy will ask, "So have you scored yet, you newbie loser?" and a seventh-grade girl will appear and rip Mr. O's clothes off. Then some gang members will roll up and accuse O of  "messing with my girl?" and pull out their knives and cut him.

No, I don't really think everything we've taught him about who he is and how he's to behave in the world is going to go out the window the minute some idiot offers him drugs. But we live in such an "anything goes", YOLO kind of society. We're all encouraged to just do what makes us feel good...middle schoolers with their immature minds and hormones have no reason not to think the same way.  Mr. O is a sensitive soul and I know how taxing it can be to be in an environment where your peers are acting like you're lame because you're not using or drinking or getting physical.

Here's the bonus freakout round: I know he'll have a target on his back because he's a black male. The child may be 11-years-old but he's also 5' 1", which means he's quickly leaving the "aww, you're so cute" stage and entering the "you're inherently violent and I'm scared of you" stage. Nope, I don't just think other people's black male children are negatively perceived in school--or three times more likely to be suspended. Middle school increases the likelihood that he'll be seen as having an attitude when he asks questions about something or is unhappy if he's not treated fairly--Mr. O has a real sense of justice so I worry about this.

I know, I know. He'll come home and everything will be fine. Inhale. Exhale. Time to walk out the door. Wish us luck.
Email Post
Labels: black males Drugs Education Mr. O school

Did you hear the episode of "This American Life" about middle school? http://www.thisamericanlife.org/radio-archives/episode/449/middle-school
One of the people they interviewed was, I think, a former teacher who said basically that there was so much getting in the way of learning that there was almost no point in trying to teach normal course work.
On the other hand, there's lots of reasearch showing that what you DO manage to learn at that age stays with you your whole life. Which, specifically, is a reason not to put my daughter around other biochemically insane kids who might teach her she is not a happy, friendly, loving and lovable great student who at age 6 said she wanted to be a roboticist (specifically to make cuddly toys that would cuddle you back).
7:51 AM, August 14, 2012

Mark said…
I'm pretty sure I cut most of my classes in Middle School (except for Latin and Bio). It was probably for the best, and I did well. I know Ramine is home schooling and Mark is doing very well... It helps to live near family with a vested interest in your child doing well.

As far as recollections of Middle School-- either 90% of the physical activity was shear bravado or I REALLY was that lame (but didn't care). Drinking and drugs were definitely a problem. I was also no way near suave and didn't understand social pecking orders-- it just seemed illogical to me (and I was right). I think I was a nerd (MAYBE a proto goth-- dressed really funny often wore baggy clothes suspenders, random pins and patches), and kind of played that up a bit. I got into a few fights which shocked me, since one precipitated the other-- basically somebody hired another kid to rough me up since I threw him against a wall for being annoying... But for the most part kept my head down, cut classes at every opportunity and did all my homework.

Sorry I'm rambling, Liz. I'm really trying to remember if it was horrible or not. Sometimes it was; sometimes it wasn't. The problem was I had an overactive imagination, got bored easily, and was in my own head a lot. People glommed onto me for no particular reason, and I somehow managed to get friends-- though I was often pressured into doing things that I really didn't care for-- and managed to botch normal social "activities" because I just didn't understand the point (insulting other people, hitting on people, drinking). I had more than a few crushes but I'd get scared off when I realized that they liked me too... Which would put me on the path of being talked about which for some reason I avoided like a plague. My fear of being a topic of conversation-- of being scrutinized--overcame my hormones.
11:32 AM, August 14, 2012

Amanda said…
Sometimes I feel like I grew up on my own island. People talk about all the crazy things they did in high school and college.. nope, not me. I was too busy. I've been hearing crazy things about middle school, lately, and wondering what planet I was living on.

I remember the vodka in waterbottles thing. I never drank, nor was asked to, but I knew kids had done it. I never got pressured into anything I wasn't comfortable with in middle school or high school, either, really. Working with a nonprofit at my previous job, I heard that middle and high school girls were getting drunk by dunking tampons in vodka and wearing them... I couldn't believe it.

Maybe being teased mercilessly in grade school made me give fuck all about fitting in by the time I hit middle and high school? When my friends in high school started doing things I wasn't comfortable with, me and my best friend left them and sat alone until we found some like-minded geeks to hang out with.

Here's to hoping Mr. O can find some chill, intelligent for their age geeks to hang with, and not let the pressure to be cool consume him!
2:44 PM, August 14, 2012

nick said…
I can understand your concern, Liz. It must be a very worrying time, with all the horrendous stories you hear about what goes on in school nowadays. But I'm sure Mr O is intelligent enough and level-headed enough to resist any unhealthy stuff he doesn't want to be part of. Mark and Amanda seem to have coped pretty well and come out the other side in good shape.
9:13 AM, August 15, 2012

Liz Dwyer said…
Jeff,
Kudos to you for homeschooling and three cheers for your daughter that she wants to be a roboticist--thank goodness she hasn't been brainwashed that girls aren't good at science.

Also, thanks to the link. That teacher is right--there is a LOT that gets in the way, but one of the things I always remember is that it doesn't have to be like this. At the school I taught at in China kids at this age did NOT wig out the way they do here. It was just culturally unacceptable. Maybe since we expect them to start flipping out at that age because their hormones are starting to rev up--and so they do.

Mark,
I am really laughing at the class cutting! How did you not end up a "juvenile delinquent"?

O told me that the worst thing he saw yesterday was some 8th graders cussing out a 6th grader who cut in the lunch line, but other than that, he says everybody seems really nice and they are all nerds in his room. That's encouraging.

I also think being such a nerd and different helped me ways that got me made fun of helped me too. biracial, bookworm, non-Christian girl who loved Depeche Mode and house music...yeah, folks who knew me back then STILL say, dang, you were SO weird. I would've tried to be a proto goth but my mom didn't believe girls under 18 should wear black. Sigh...However she was not opposed to my phase in 7th/8th grade where I wanted to dress like I was in the Victorian era. Heh. I actually wore long skirts and white blouses with high collars and frills--and my hair in a bun.

Amanda,
You know those scenes in movies like 16 Candles where there's the crazy high school party? I think I went to maybe two of those and they were seriously boring. I do remember quite a few girls from middle school being REALLY mean and catty. What was sad was a couple of them had been my friends a few years earlier. I also remember some of the girls being really disrespectful to their parents in middle school. I remember one girl in 8th grade told her mom to stop being such a bitch in front of everybody. I couldn't believe it! Anyway, O seems to be alright so far. Whew. He has SO much homework tho. Wow.

Nick
There are SO many horror stories about what happens in schools...I know there's a lot of good that goes unreported tho. I hope he keeps the level-headedness going. Mark and Amanda do indeed give me hope!