Who Would You Cast in a 'Straight Outta Compton' Movie? 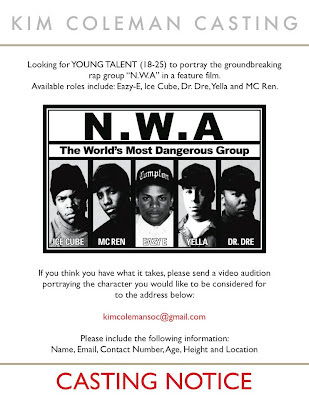 "Straight outta Compton is a brotha that'll smother ya mother and make ya sister think I love her..."

Lyrics typed from memory although I never once heard the song on a single radio station back in the summer of 1988 when it came out. Still, it seemed to boom from the stereo of every car that drove past my house that summer. If you're of a certain age, you remember listening to side one of the cassette tape, reaching the end, clicking open your Walkman, flipping the cassette, inserting side two, pushing play...over and over.

Of course, by the time I actually moved to Los Angeles in 1998 to teach in Compton, it was annoying to be asked if the city was just like N.W.A. had depicted it. I had far too many conversations where I had to explain that Compton residents did not roll down the street carrying sawed off shotguns and uzis. By then, Eazy had died of AIDS and N.W.A. had been co-opted by white frat boys who memorized all the group's lyrics in an effort to prove they were hard and "down".

"I'm casting for my next film STRAIGHT OUTTA COMPTON. Spread the word! Thanks!" director F. Gary Gray posted on his Facebook page on Tuesday. As of this writing, there are 2,341 shares--many from actors who want to play one of N.W.A.'s members. I have no clue who I'd cast in this.

Black male actors between the ages of 18-25...Who are they? Granted, I don't watch much TV so I don't know who has a role on what show but please don't tell me that Tristan Wilds, the black guy who was on "The Wire" and "90210" is gonna get the part of Eazy E. And no to Evan Ross and Corbin Bleu, too.

So, who else is there? When I go to the movies, I don't see black men of this age on screen. I see Daniel Radcliffe, Taylor Lautner, and freakin' Michael Cera.

Sorry, Hollywood, Denzel can't be cast in this one. Neither can Don Cheadle, Idris Elba, or Samuel Jackson. And, unless Morgan Freeman's going to play somebody's granddaddy, he's out too.

It's a shame that because there isn't more diversity in the stories being told in Hollywood--and in who is getting cast for the stories that are greenlit--I don't have a ready list of names. Maybe this means Gray will have to cast brotha's who are mostly unknowns. I don't mind that as long as they act. I certainly don't want to see some untalented chump playing Dr. Dre, Eazy or Ice Cube. Yeah, I guess since Cube is 43 and stars in family shows these days like "Are We There Yet" he's clearly not playing himself.

So if not Denzel, who would you cast in these parts?

Joy said…
I think Cube's son is going to audition and so is Eazy's. It is a shame that there aren't any names that easily roll off my tongue for 18-25 young men who could play these parts.
Nothing's really changed. If it had, that question would be easy to answer.
5:39 PM, June 22, 2012

Anonymous said…
Whats the point of even doing a show of this type? There are thousands of other worthwhile stories that have not yet even be told, why this sorry arse story has to be told now just when we're moving on from the shock of all the shit that happened! Drugs, death , murder, misery, wots entertaining about that?
Or why not tell the true story of how the music moguls masterminded a plan to have all the black youths kill each other through the selling of influential rap music that has subliminal negative messages.
1:59 PM, June 30, 2012