I'm the Parent of a Middle Schooler

Even though I can't pick him up anymore, I still think of my 11-year-old son Mr. O as being like this: 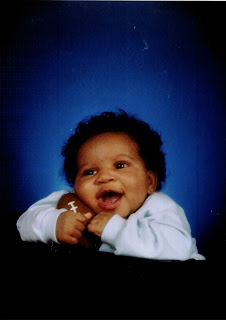 Well, that cuddly baby graduated from fifth grade yesterday. Nowadays he really he looks like this: 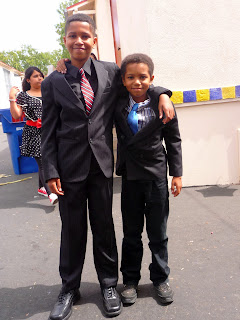 He's  soooo handsome in his suit. His little brother, Mr. T. cleans up nicely, too. And nope, they're not babies anymore.

We've read a bunch of books and had plenty of level-headed discussions about puberty over the past year but in August when O starts sixth grade I want to staple a sign to his forehead. It'll read, "Dear Girls: My mother said you have to ignore me so I can focus on my schoolwork."

His going to middle school also amps up all my anxieties about what happens to boys of color in America as they get older--when folks stop saying they're adorable and start being afraid of them. Sigh.

Also, telling people I'm the mom of a sixth grader makes me sound old as heck. All the worrying--and vanity--aside, I'm just grateful I've been blessed with such a wonderful son. Grateful to get to love him and raise him to make a difference in the world. I really can't wait to see what comes next for him.
Email Post
Labels: middle school Mr. O

Anonymous said…
Take him to comic con and the chances of girls distracting him will all but vanish.
7:37 AM, June 21, 2012

Anonymous,
Heh, he would looove that. We are already up in Golden Apple comics at least once a week. It's not helping.

Jenny,
Thanks for saying they're beautiful. I should get them in suits more often! Yeah, I think I'm in for some real surprises and changes over the next year. I'll need that good luck! ;)
12:43 PM, June 21, 2012

Caroline Alexander said…
"His going to middle school also amps up all my anxieties about what happens to boys of color in America as they get older--when folks stop saying they're adorable and start being afraid of them. Sigh."

Liz Dwyer said…
Doodling,
I don't remember thinking my mom was old at that age either. The problem is our ageist society. Folks look at you differently when you tell them you have older kids. I should just start telling folks I got pregnant in high school! ;)