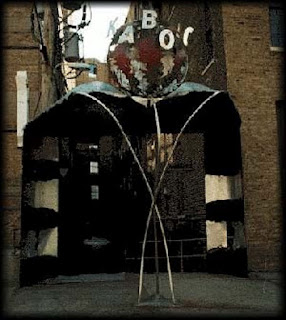 This afternoon while I was at work I found out about the death of gifted author and feminist Erica Kennedy. We got to know each other around the time her brilliant novel Feminista came out in 2009. It's so shocking and upsetting to hear that she was found dead in her apartment this week--what specifically happened remains to be seen but Erica was such a beautiful and witty woman. She's gone waaaay too soon.

With the news of her death, any happiness I felt over it being Friday night evaporated. All the life was sucked out of me by the sad news. I drove home through a crush of traffic in a daze--talking to my parents and flipping through radio stations.

I have Sirius XM--threaten to cancel and you will pay a FRACTION of what they're asking--because I spend a lot of time in my car. I came across Black Light Sessions, a mix show by one of my favorite DJ's, Fedde Le Grand. What I heard him mixing almost made me crash my car.

You see, sometime in 1992 I became a permanent, albeit majorly underage, fixture on Friday nights at 747 N. Green in Chicago--the address of one of the city's hottest clubs, Ka-Boom. European techno mixed with the best of Chicago and New York house was in heavy rotation, and during the winter of '92/93 there was one tech house track in particular that just set the whole place ablaze. I mean, EVERYBODY in there would be on their feet dancing...but I never knew what the song was called or who it was by.

Over the years I wondered about it and wished I could figure out who it was by, but eventually I stopped hunting. And then out of the blue Fedde played it in his mix tonight. Once I got home all I had to do was look up the setlist and there was the song, a bootleg, updated remix of "New York-London" a track produced in 1992 by Stealth Records in Fedde's homeland of the Netherlands. The bootleg led me to the original:

I hooked my laptop up to the speakers that go all over our house, cranked the volume up and danced. And then rewound it to the beginning and did it again. And again. And then I just played 1:26-2:24 several times because that's the part that, back in the day, made everybody--including me--really work it out on the dance floor.

I felt much better after that. I suppose being reunited with a long lost song that's connected with such amazing memories of that time in my life will do that. It's also a lucky reminder that even when you're separated from something--or someone--who means a great deal to you, when you're finally reconnected, the reunion is sweet.

That's how it'll be for the many of us who will miss Erica's voice in this world. We can still reread her work and remember her intelligence and creativity. But one of these days we too will pass from this world. Sister Erica, when it's my time, I hope I see you on the other side.
Email Post
Labels: Chicago dancing Erica Kennedy fedde le grand feminism house music Music R.I.P.