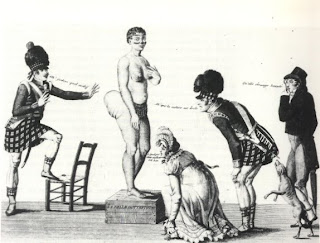 I'm not in an interracial relationship - but having previously been in some, and being the product of one, I want to thank commenter "Matt" for putting his two cents in on my post on having to explain to Mr. O why it is that he doesn't see more white guys with black women.

Matt brought up a great point about the belief that white men chase black women because they have a black girl fetish. He said:

"My wife and I always get excited when we see an interracial couple "our direction" (white male, black female). I like your 2 reasonings on why it's not more common, but the one thing that has always been hardest for me to deal with is that fact that people constantly question the intentions of our relationship. Black girls are not my fetish. My wife is quite simply the love of my life."

Aww! I love that she's the love of your life! If you're married, that's how it should be, no matter what color you are. That said, I feel you, Matt.

Growing up, I almost never saw another black woman married to a white man, and I would get REALLY excited the few times that I did. I've also heard some really crazy justifications for why my dad married my mom.

I can't tell you how many times people have told me that my white father probably only married my black mom to legitimize his jazz career. Because, you know, there's no other way that he could be a legit jazz musician without being married to a black woman.

I've been told that my mom must've just turned my dad out and he was so whipped, he just lost his mind and decided to marry her. Because you know, black women are so powerfully sexy that once you've had black, you never go back. "Back" being, those boring white girls that obviously don't have the super bionic powers in bed that black women have. Cue up some Hottentot Venus-type racism!

Do most people ever assume that my parents must've really loved each other? Nope. They always think it was about something else. Never mind that that "something" else isn't enough to sustain a marriage - and all the racism interracial couples face - for 40+ years.

Clearly, I'm aware that some people have some really insane beliefs about men or women of another racial or ethnic background, and then purposefully seek out relationships with those people because of fetishized stereotyping. But, I don't think it's right to assume that the jacked up psychosis of a few speaks for the majority, or that every interracial couple is motivated by fetishes.

Matt went on to add:

"Also, pop culture still stinks at portraying white men in interracial relationships. "Soul Sister" by Train, which was one of the biggest songs of the year, is incredibly insulting. Finally a song about a white man and a black girl he spurts lyrics like: “The way you can cut a rug Watching you is the only drug I need You're so gangster, I’m so thug You’re the only one I’m dreaming of” Blah... it's easy to see why people interpret interracial relationships as fetishes."

I have NOT heard that Train song. Someone was just telling me how awesome Train was on Sunday's American Music Awards. I don't listen to Train so I wouldn't know their music if it slapped me. Now I'm glad that I don't know it.

The thing is, we clearly can't look to pop culture for examples of healthy relationships, whether interracial or otherwise. Pop culture loves Snooki, the Situation, and the rest of those Jersey Shore fools. Although I wish there were healthier examples, I can't hold my breath for pop culture to provide them. But if I see the lead singer of Train around anywhere, you can rest assured, Matt, I'm gonna give him a piece of my mind!
Email Post
Labels: black women fetish internalized racism interracial relationships jazz Mr. O musician racism Sex white men

Cynthia said…
What about it not being a fetish of white men to date black women, but rather the idealism that most women in general are hardwired to abide “family law”, and men more or less are allowed to roam outside of the herd, without it being as taboo. I know I am switching gears to a topic of sexism rather than racism. But I have seen this being the case more often than not involving all interracial dating.
4:27 PM, November 23, 2010

Liz Dwyer said…
Cynthia,
I agree. I don't think it's a fetish for most interracial couples. Not at all.

Sexism probably does play a role- I'm not so naive as to think it doesn't, but then why do we see more white woman/black male couplings? Is it because white women face less sexism? Hmm.
9:08 PM, November 23, 2010

Nina said…
I've just finished reading bell hooks' Ain't I a Woman, which deals directly with how the lack of black woman/white man marriages reflects the status of black women in this country (a status that is doubly marginalized and oppressed by racism AND sexism going all the way back to slavery). It's pretty amazing how she traces that racism and sexism all through American history into the present day.

I'm the product of an interracial marriage (Asian mom, white dad) and I know my parents love each other deeply (they've been together for nearly 30 years), but I also wonder if the play of white status didn't play into the fact that my mother was mainly attracted to white men (note that Korean women marry a white man 61% of the time) or that the status of Asian women as the exotic "other" did not at all play into my dad's attraction to Asian women, even previous to dating my mother.

I think we can have a conversation about, maybe not fetish per se because that reduces love and marriage, which are really complex relationships/social ties, into base sexuality, but rather a really difficult and honest conversation about the racist/sexist constructs that we all participate in, usually totally without any intent or even consciousness. I definitely think my parents love is real, true, and wonderful. At a time when interracial marriage was not common, they were courageous and I am proud of that legacy.

But I also think that in order to figure out the answers to WHY certain things are the way they are (like why Korean women like my mother marry white men 61% of the time or why there are so few black womam/white man marriages) we have to be willing to see the complexity of love mixed with the reality of our racist/sexist constructs.
10:26 PM, November 23, 2010

Anonymous said…
Interesting point of view expressed by Nina. I am in an interacial relationship. I am Black and British, my husband is white. We have such a great time and are still very much in love.
We love each other so much its amazing.

I have had a black guy in a restaurant put crap in our food. I have also had black guys asking me why I am with a white guy and that they hate that.

I have also had some black female friends who have told me that I am supposed to keep the black race going and that by marrying a white man I am letting our race down.

On the flip side, I have some black men and women in my family who are very happy for us.

steffb said…
Hmmm, bummer about Train, I like that song LOL. Speaks to my cultural ignorance that I never thought of a "soul sister" as being Black - boy that sounds dumb here, but I was thinking of "soul mate" which I consider my husband and I to be. The lyrics go on to say, "You see, I can be myself now finally/ in fact there's nothing I can't be/ want the world to see you'll be with me" - not such a bad message.

Fielded this same question a while back from my then-four year old, about why whites and Filipinos married each other (DH is Filipino and I am white). That whole exotic Asian other thing was quite hard to explain to her LOL.
11:12 AM, November 29, 2010

baiskeli said…
Oh wow!, I love that Train song, but I've never listened to the words. Now I don't think I'll be listening to it again. Those lyrics seriously piss me off.

My marriage is the other way (I'm black, my wife is white) and yeah, we sometimes get the same kind of stupid (though in this case the stereotypes are slightly different), though not with our friends (who are a pretty diverse group).

The only recent movie that I can remember that dealt with interracial marriage well was suprisingly, a comedy called "Guess Who", that has Zoe Saldana and Ashton Kusher. Most times, when movies touch the subject, they fail badly.
2:25 PM, November 30, 2010