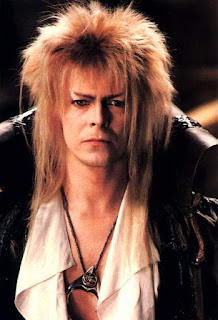 Let me explain: Mr. T and Mr. O's school has a super cool animation partnership going on with Jim Henson Studios, and recently both boys got to head over there for a visit.

Afterwards, my future animators asked to see the 1980's classic film, Labyrinth because it's directed by Jim Henson and they'd heard about it at the studio.

Streaming Netflix had the film, and we had a good time watching it. Nine year-old, Mr. O, was all, "That guy who plays the Goblin King is really cool. He has two different colored eyes!"

Since I want my kids to be a highly edumacated, I told Mr. O that the Goblin King's played by a super famous singer named David Bowie.

I played a couple of Bowie songs for him, Let's Dance and Fame, and he was suitably impressed. End of story... till last night.

Mr. O was back to asking me questions about "that David Bowie guy who played the Goblin King." He wanted to know when he could watch Labyrinth again. He wanted hear Let's Dance again.

And then...EEK! He asked, "Do you have a favorite David Bowie song?"

I realized I could not play Ashes to Ashes for him.

Warning bells screaming, "Do you want to have to try explain to your kid what this song is about, because you know he's gonna ask?" started going off in my head.

I didn't answer and instead redirected Mr. O to another 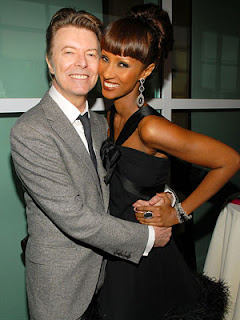 fun Bowie fact. "You remember that lady, Iman, on The Fashion Show? The one that I told you is one of the most famous supermodels ever?"

He nodded his head and I continued. "Well, she's married to David Bowie. Want to see a picture of them together?"

He did, so I showed him a few online and he had two comments:

1) "Wow, he looks a lot different than he did in Labyrinth."

He paused, and just when I was about to to jump in and tell him that grandma's really beautiful but she wasn't a supermodel, he asked, "Hey mom, how come more white guys don't do that?"

Here I was all reluctant to discuss freakin' Ashes to Ashes and ta-da! I'd landed in the insanely complex minefield of why white men don't marry more black women.

"And how come I never see any white guys in our neighborhood with black girlfriends?"

Uh, um, err...why don't the hipsters in my hood have black girlfriends? Nice.

I found myself wishing I'd made Mr. Observant go to bed early, but that's not the kind of question that you ignore or try to side-step. So I answered it.

I told him that it's because racism makes people afraid of falling in love with someone who's a different color, and it makes people blind to how beautiful and smart black women are, so white guys pretend think they aren't attracted to them.

I also told him how in our society, racism is a power construct, and white men have the most power. Sometimes white men, and in fact, men of all backgrounds, think that if they publicly have a relationship with a black woman, they're going to lose some of their "status" and power. Having the courage to give up that power is a big deal, and not everyone's willing to do it.

He understood that because he's spent time with my mom and dad. He's seen the looks they get in public, and clearly, the child's no fool.

Then he said something that made me get a little teary-eyed. "Grandpa was pretty courageous to marry grandma."

"They were both pretty courageous to marry each other," I replied.

Then he asked me again about my favorite Bowie song. I decided to let him hear it, and of course, he started singing, "My mama said to get things done, you better not mess with Major Tom."

Lisa MB said…
Oh. My. God. Best real-life examples ever... for what I'm going to say to my kids when that comes up. Tell your mom us black supermodels marrying white rock stars have to stick together. ;o)
Sorry you had to throw yourself on those grenades for me, but you did a fab job at it.
Now that I think of it, I asked my mom a similar question at about the same age. Only I was too young to consider that mom had grown up in 1940s-1950s Kentucky. She couldn't even watch a movie in the same section of the theater with white kids.
12:52 PM, November 19, 2010

Ileana99 said…
First off I gotta say I love the Labyrinth! One of my favorites! Secondly that Mr. O is very observant!!!And lastly, how could anyone have handled this scenario any better than the smart and lovely Los Angelista! Gotta love our kids! They can really bring a smile to our faces.
2:49 PM, November 21, 2010

Matt said…
My wife and I always get excited when we see an interracial couple "our direction" (white male, black female). I like your 2 reasonings on why it's not more common, but the one thing that has always been hardest for me to deal with is that fact that people constantly question the intentions of our relationship. Black girls are not my fetish. My wife is quite simply the love of my life.

Also, pop culture still stinks at portraying white men in interracial relationships. "Soul Sister" by Train, which was one of the biggest songs of the year, is incredibly insulting. Finally a song about a white man and a black girl he spurts lyrics like:

“The way you can cut a rug
Watching you is the only drug I need
You're so gangster, I’m so thug
You’re the only one I’m dreaming of”

Liz Dwyer said…
Lisa MB,
I seem to really enjoy grenades! I often think about the experiences of our parents, and I hope our kid's experiences are as different as ours are from our moms and dads.

Jameil,
You gotta add Labyrinth to your movie list... although I can't watch Jennifer Connelly in anything now without thinking of that scene in Requiem for a Dream. Sigh!

Ileana,
Labyrinth is one of my faves too, and yes, he is VERY observant. Sometimes he's TOO observant for my comfort level but he does put a smile on my face. ;)

Molly W. said…
I don't think the Train song is actually about an interracial relationship.

The title seems obvious, but the singer who wrote it says it's about what he imagines the Burning Man festival is like:
http://www.hot1047.com/music/hot-music-news/14429-train-frontman-tells-story-behind-hey-soul-sister.html.

(Unless it *is* about an interracial relationship, and the Burning Man story is an attempt to mask that, which is even more depressing.)
12:09 PM, November 23, 2010

Daniel said…
Pretty good answer.
But that only explained the deep reluctance as if it’s simply a white guy problem.
We both know better than that.
How come you didn’t explain the deep stigma’s in the BC causing inhabitations on the female side of that equation?
4:59 PM, December 02, 2010

Greg said…
I met my wife (Lisa MB) on match.com. Most of the black women at my college didn't join the drama club, the comedy improv group, the literary magazine, or the other activities I participated in. In fact, most of the black students seemed to self-segregate.

And to top it off, the head of the Black Student Union at my university was regularly making anti-semitic statements and stirring up tension between the black students and the Jewish students. Not a likely environment for a nice Jewish boy to meet his black soulmate.

When I got out of school and got into the internet industry, there weren't a lot of black women I ran into.

Basically, I looked for women who were college-educated, socially liberal (but without an activist bent - activists are too much work), and who lived close enough to the middle-class white neighborhoods I lived in so as to not be geographically undesirable. Not a whole lot of black women with those qualities showed up in my daily travels or on match.com.

Then one did. She was so "well spoken" (had a match.com profile that showed she could write well and cared about writing) and cute to boot. Two months later we were engaged.

I wasn't looking for a black woman. I was just looking for someone who shared my interests and had a similar background. She was a nerd who loved science fiction and Greek mythology, like I did. And she grew up in a middle-class white neighborhood with a bunch of white friends like me. We had a lot in common that we could build on.

There needs to be some common interest or experience to provide the foundation upon which you build your relationship, regardless of race or ethnicity.

It's not as much about racism or giving up power as it is about lack of shared experience and a lack of being confident enough on to make the first overture to get to know someone who you fear will likely reject you out of hand because you're visibly different than them.