What Will Getting Older Mean For My Black Sons? 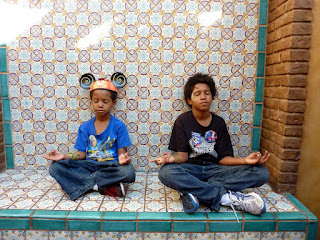 Last night I observed my nine year old son lounging on the couch... and I'm not sure when this happened but he's grown so much he's now the length of three out of four cushions.

When people ask him how old he is, he replies, "Almost ten." Never mind that he doesn't even turn ten till the end of January. In his mind, it's a done deal.

"I'm gonna be a tween!" he says in a voice that's always too gleeful for my ears. He doesn't exactly "get" that the tween and teen years might not bring the same things to him, a young black male, that they do to the fantasy land of the white kids on the Disney channel.

Come to think of it, I have yet to see a show on either Nickelodeon, Disney, Disney XD or ABC Family that in any way portrays the true impact of racism on young black males. And I must've missed the after-school specials about how to deal with suddenly going from being perceived as a cute and harmless young black boy, to being seen as a scary and threatening black youth.

I've long asked myself, what will getting older mean for my two black sons? Looking at my almost five foot long eldest son stretched out on the sofa, finding out the answers to that question is suddenly closer than I want it to be.

"Thursday, the ACLU of Pennsylvania filed a lawsuit challenging “stop and frisk” searches by the Philadelphia police department.

The ACLU’s lawsuit was a result of a complaint filed on behalf of eight men, including Jewell Williams, a state lawmaker. Mr. Williams said he was handcuffed and detained during a traffic stop. The police later apologized to him, citing a misunderstanding.

But what happens if you’re not a state congressman?"

I don't want to project what experiences my sons will have, but chances are, that's going to happen to them sometime in the future. How do I know this? I live in the United States and racism runs deep through the social fabric of this country, and Los Angeles is not exempt from that.

It is not a joyful feeling to feel like I need to tell my nine year-old that as he gets older the ladies that say he's adorable are going to morph into women who clutch their purses a little tighter when he approaches. I have not yet found the balance between letting my sons be children, and proactively telling them the role racism is going to increasingly play in their lives.
Email Post
Labels: black children black males Black Men Disney kids lawsuits Los Angeles parenting racism Walking

Annette said…
My son is mixed (Black-anese), but takes after his dad more than me. In that, he's lucky. I don't think most people perceive him as a Black man until they meet me. And even then he's so "California" (laid back, skater type) that I think people forget, or at least don't mention it. I keep hoping that he won't ever have to experience blatant racism.
3:46 PM, November 08, 2010

Anonymous said…
There is only so much you can do to prepare them.


Ultimately, they will make their own choices and those choices will impact their experiences.

nick said…
It's a scary prospect that your innocent kids will suddenly turn into bogeymen because of all the prevailing stereotypes. I guess all you can do is watch for any sign of it happening and then wise them up on how to deal with it without losing their self-confidence.
1:51 AM, November 09, 2010

Liz Dwyer said…
Jameil,
My heart aches, too. Makes me feel like moving to a super rural area where there's nobody around.

Annette,
My kids are very laid back California as well. But as we know too well from Oscar Grant's murder in Oakland, you can be laid back Cali and still be profiled. :(

The Ink,
I like to think gift - it's other folks who are blind and can't see it for what it is.

Nick,
Last night I went to an education forum and one of the big things that kept coming up in the panelist's stories was teachers saying they couldn't achieve... I'm back to worrying more about THAT than anything.
9:12 AM, November 09, 2010

1969 said…
So true Liz. Raising our boys into strong black men comes with so many other responsibilities and warnings. At least yours will have great parents to help guide thir course.
4:09 PM, November 09, 2010

Faith said…
But the danger isn't coming from the "outside" community, cops, whites, etc. It's from other black males 9 times out of 10 and that's the result of mass fatherlessness and the deteriorating neighborhoods that breed that destructive mindset.
2:48 PM, November 13, 2010

Unknown said…
Liz, I am so tired already. I stand up everyday and ask the universe for strength. Last summer on the "L" was the "grab purse move seat" episode - I was with him and yelled out "REALLY?" ... then this fall we fell into freshman year and he was called the "n" word the second month of school - fellow football player told he and his pals "You all are some fast N*****s" - is that what I get for allowing him to attend school in Bridgeport? He took it in stride thanks to all the life preparation I gave him, but all the prep didn't do what I thought it would. It still hurt, it still happened, it is still such a prevalent thing in our world - I reluctantly anticipate his first run-in with CPD ... So I guess in our generation it simply remains a rite of passage.
11:12 AM, November 16, 2010