Incense sellers still sell their wares on the sidewalks and a man in a wheelchair rolled down the middle of the street on the yellow center dividing line. The General Grant Houses haven't been torn down. Yet.

Thank goodness these things haven't changed! (Well, maybe the housing projects should go.) Otherwise, I might not have known I was in New York City, riding the M60 bus down the legendary 125th St.

Harlem will still be Harlem as long as the Apollo Theatre still stands, but things have definitely changed in that corner of the world. Starbucks is on the corner of Malcolm X and 125th. There's an H & M, a M.A.C. store and an Aerosoles store. Aerosoles? Yes, Aerosoles!

Where do the people who can no longer afford to live in Harlem go now that Bill Clinton's set up shop and made it ok for white folks to come to the community and gut-rehab brownstones? Why do goods and services usually only come to urban neighborhoods after white folks move in?

Alas, I'll leave the pondering of such heavy questions for another post.

I'm here in NYC for such a happy reason. My dear friend, Leslyn Kim, is having her baby shower this weekend. It's a reunion of sorts, since our other friend, Daphne, also flew in from Chicago. We are all three together for the first time since my wedding. Now we're three married ladies with kids (or kids on the way)! We've come a long way from the days of Willard Hall at Northwestern.

What's so nice to see is that all the women in Leslyn's family have also flown in for the shower. Her grandmother is even here. What a nice example of a strong and functional African-American family. It's an image that doesn't get shown on TV or talked about in the paper too frequently. All of us had a great dinner at a great place called Josie's Restaurant. It's really healthy foods that have an eclectic twist. Nothing bland or boring on the menu. The food reminded me a little bit of the Newsroom Cafe in LA. I had vegetarian meatloaf and some bok choy. 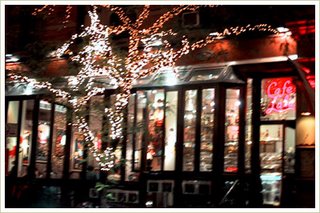 Daphne's pregnant as well but despite that, at around 11 pm, I dragged her up Amsterdam to Cafe Lalo. If you've ever seen the Tom Hanks and Meg Ryan movie "You've Got Mail", you've seen Cafe Lalo. It's the location where Tom's character is supposed to finally meet Meg's character. It's a famous spot because of the movie, but that's not why I come. There's something about the atmosphere that's so enjoyable. It's the perfect place to sit down and have a nice cup of tea and a coze with a friend.

Really, what a day. One thing is for sure, I love to make new friends, but there's nothing like the old tried-and true friends you've had for ages.
Email Post