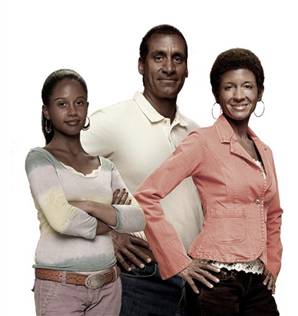 There's so much running through my mind after watching this show, particularly given the fact that it's set in Los Angeles. The L.A. Times spent some time trying to discredit the show , wondering if it's irresponsible, possibly stirring up racial tensions in a city known more for it's riots than for it's unity. That kind of thinking tells me it's ok for racism to affect some people on a day to day basis, as long as the rest of the city doesn't have to deal with it.

My first thoughts are about the white daughter, Rose. She get's this black "chaperone" who takes her down on Crenshaw while she's made up as black girl. I guess you need a chaperone to teach you how to walk down Crenshaw. What does it mean when the white daughter needs someone to make sure that she's going to be ok going into a black neighborhood? Are black people that scary? Appparently she's from Santa Monica and has never spent time in South L.A. at all. That's not so unusual. I remember teaching in Compton and meeting folks from Los Angeles, folks who'd grown up here, and being asked, "So where exactly is Compton?" I sometimes got the feeling they were asking so they'd know and could avoid it.

What would have been real is if Rose went for her "see how the other half lives" stroll down Crenshaw and then, instead of subsequently enrolling in a Hollywood poetry class with black folks, she enrolled as a student down at Locke or Crenshaw High. Then she'd really see what it means to be an average black teenager in Los Angeles. She'd see how black folks become statistics and how they become outstanding successes. She'd feel what it feels like to experience the tension between black and Latino students in our schools. She'd see first hand what it looks like to know that most teachers are not anticipating you'll be attenting UCLA or USC. That would've been reality!

I have to tell myself that I'm just getting crappy service when I walk into the Anthropolgie store at the The Grove. If I don't tell myself this, I'd be a ball of rage all the time. I might spend 20 minutes in there caressing every overpriced stitch of clothing and feeling on the cute dishes. No one approaches me, so I walk out. Bad service? Oh yes. Definitely. Racism? Here's my test: When salespeople ask someone who isn't black if they need help and they haven't asked me and I've been in the store longer, that's racism. When they walk by me without even making eye contact, I could write it off as being hipster scum snobbery. But I know better. And I know Elarryo gets it even worse than I do.

We want to act like today's world doesn't care about race. After all, we've got Condoleeza Rice in a high powered role and everyone watches Direct Effect on MTV and loves Usher and L'il John. We all want to pretend race is a non-issue, without asking ourselves why we've never even had a black Bachelor (Flavor Flav does not count) - and why the white Bachelors never pick sistahs. Really, we were all just one big happy family until Hurricane Katrina came along and messed things up, right?

I can't wait to see what happens next on this show. I'll be tuning in to FX next Wednesday at 10 to see how things develop for these two families.