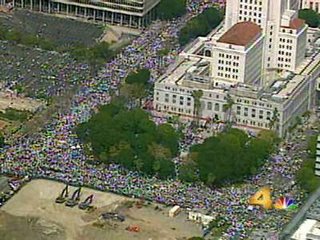 It's happened all over the country over the past few days. On Friday, students were walking out of schools down in Huntington Park and South Gate. On Saturday, Downtown L.A. was filled with a half million folks protesting the immigration bill. Today, there are more protests.

I have mixed feelings about the bill. On the one hand, to make it a felony to ride in a car with someone who's here illegally seems to be a bit silly. If those kids are here illegally, but are enrolled in school, they can be arrested? That makes no sense. On the other hand, employers shouldn't be hiring folks illegally. And, I don't think I can just move to France and get a job, no matter how much I'd like to enjoy their six weeks of vacation and fantastic maternity leave policies.

If the average American was feeling ok about their own job/finances, they wouldn't be so concerned, so fearful of a "Latino Takeover". I'm happy that there are middle and high school kids out there today who are willing to protest. Kids in Hollywood, kids in South Gate, kids in Downtown. Good for them to show that they aren't just sitting around applying hair gel.

I'd wish they'd walk out in protest of the crappy education they are getting.