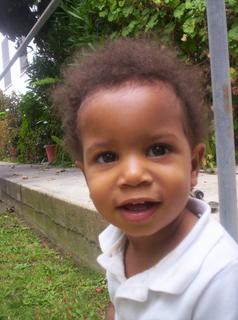 Toussaint, engaging in some monkey business in our backyard. Our baby has grown so much this summer both physically and socially. His voice sounds a bit like Elmer Fudd when he says, "I love you" or "Stop it!" And, he's losing a bit of the brooding and scowling tendencies he used to have and is much more inclined to burst into a smile than he used to be. Elarryo and I have slowly been realizing that if we are serious about T being our last child, then we should just break down and get rid of things like his baby bath seat and his baby bathtub. I am perfectly happy having two healthy and sweet children. There is a part of me that would love to have a little girl to hang out with me when I don't feel like trekking along to Travel Town to gaze at ancient locomotives for ten hours. Of course, I'm making all sorts of gender-biased assumptions about any daughter I would have, boys like trains and girls want to sit in the house and blog, right? 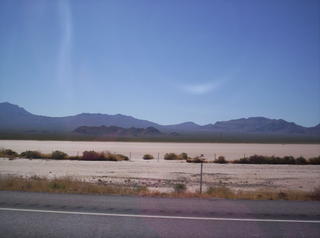 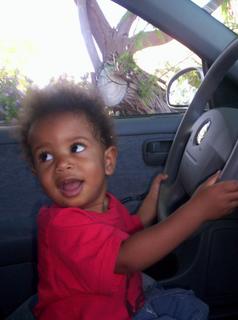 Toussaint also displayed keen driving skills while crossing the desert on the way back from Las Vegas. He did have a few problems keeping his eyes on the road. 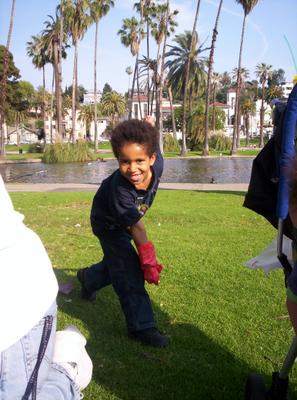 Olinga had a fabulous time at Echo Park playing Spiderman. You can see that he's shooting webs at everyone. We kept Toussaint in the stroller most of the time so he wouldn't be able to hurl himself into the murky bog that is the "lake" -- really, a small pond that certainly includes no fish but is home to tons of algae and seaweed. This was the day that Elarryo boasted to me that you didn't get tickets for a cracked windshield. Of course, twenty minutes later as we're looking for a place to park, karma slapped him in the face: we were pulled over by a LAPD motorcycle unit. "Ma'am, the reason I'm pulling you over is because you have a crack in your windshield." Olinga is in the back seat asking, "Do you know my Aunt Cyndee? She's a police too!" 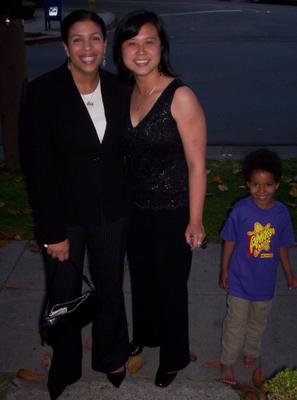 I've been meaning to post this picture of dear sister Jenny Tan and me all summer long. I've been really lazy about downloading pictures from my camera. This was the night we went to La Cachette (and saw Ryan Seacrest) You see handsome Olinga in his purple Amoeba t-shirt next to us. Since then, he's also acquired orange and green Amoeba shirts as well. In case you don't know, Amoeba is one of Elarryo's favorite hang-outs in Los Angeles, and the place he buys all his music nowadays. Jenny is leaving for Harvard in a month to do the principal program there. I'm going to miss her a whole lot.
Email Post