5 Things I Learned About Blah People This Week 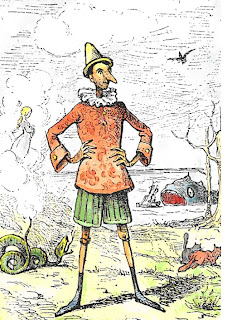 It’s an eternal truth that politicians lie. This week we found out that modern politicians like presidential candidate Rick Santorum lie about what they’ve said even when there’s video footage to contradict the lie.

Thanks to Santorum we know that it's possible to dogwhistle to a mostly white crowd of Iowans by saying "I don't want to make black people’s lives better by giving them other people’s money." Then, when you're called on your racism, you can have the audacity to go on Bill O’Reilly’s talk show and say, "and I didn't say that. If you look at it, what I started to say is a word and then sort of changed and it sort of—blah—came out. And people said I said black. I didn't."

Blah people. Gosh, it turns out that this week I learned a LOT about blah people. For example:


1. Weight Loss Companies Like to Hire Blah People: Jennifer Hudson and Charles Barkley for Weight Watchers, Mariah for Jenny Craig, and Janet Jackson for NutriSystem.  Blah celebrities are getting PAID to sell losing the chub and getting fit. So why do some folks give our blah First Lady Michelle Obama a hard time for promoting getting fit through exercise and eating right--for free? Oh wait, is it because she's blah?

2. Blah Teenagers Born in the U.S. Can Get Deported to Columbia: Texas teen Jakadrien Turner ran away from home at the age of 13. She was arrested for shoplifting a year later, gave a false name to police--yes, there was drama back home and she probably didn't want to go back to her parents--and ICE deported her, even though she spoke zero Spanish. Turner is now 15 and, thanks to Facebook, she was found by her grandmother--working as a maid and pregnant. Yes, our blah president, Barack Obama, has been informed that someone effed up.

3. Blah Girls Are Experts At Articulating Racism: Comedienne Franchesca Ramsey was my heroine this week with on-point her "Shit White Girls Say...to Blah Girls" video. I have had almost every one of these things said to me, especially the part about suntans and "twins" and ALL the hair crap. It went viral--over 2 million views in just a few days--because it's such smart commentary and it's hilarious. I keep watching it to make myself laugh.

4. More White Iowans Are On Welfare Than Blah Iowans: Really, less than 10 percent of welfare recipients in Iowa are blah. That means over 90 percent are NOT blah. Hmm. I guess hard facts aren't important to politicians. Not when it comes to blah people.

5. Blah People Aren't Sitting Back And Twiddling Their Thumbs Over Rick Santorum: No, modern blah folks will rake a fool like that over the coals, mocking him with tweets like "I'm not racist. Some of my best friends are blah." I saw variations of that one so many times I can't give credit to just one person.

Phyllis said…
I know this is really NOT funny in so many ways, but it makes me laugh anyway. The man's effort at self-defense is so absurd and pitifully transparent! Blah people - this is just rife with comedic possibilities. I particularly liked this article: http://www.benningtonvalepress.com/2012/01/santorum-denies-racist-remarks-by.html
1:55 AM, January 07, 2012

Daniel said…
Los Angelista,
Oh my! This was hilarious! Thank you so much. Made my day. Even though I know it's a serious reflection of such wrong stuff, it's so god-daum stupid I can't stop laughing about Mr. Sanatorium. This is what we've come too, huh?

I have one to add, that happened to me (Can Y-T actually add one?). It was at work, one guy got bold and actually asked “So what's it like doin' a Blah girl?” I was so taken aback I just stared for a bit, trying to figure out was idiot serious or simply trying to yank my chain.

The link to "Shyt White girls say … to Black girls" was unbelievable! I laughed so hard, because I too have heard about all of it. Her other ones (especially the Nicki Minaj one)had me ready to pee my pants. But … problem here. I found myself re-running the clips over and over… just to watch Franchesca Ramsey, she's sooooo beautiful. I better get out the house and run, lol.
12:51 PM, January 07, 2012

Makabit said…
I have to say, as appalled as I am about the little girl who got deported, I'm pretty impressed with HER. I mean, she's in a strange country, knows no one, doesn't speak the language, and she manages to, well, not starve to death, and find work.

Liz Dwyer said…
Phyllis,
That article is awesome. Santorum is ready for comedy because it's just like, really??? His is the kind of lie you expect from a toddler, not a grown man. I was hoping SNL would parody him, but I missed the beginning so I don't know if they did or not.

Daniel,
IKR? It is hard to believe that these are the kinds of clowns running to lead this country. In 2012. That guy at your job was REALLY bold, wasn't he? I can think of a bunch of really mean comebacks to that question. Like, "dating them is better than dating yo momma"--geez, I'm so immature sometimes. And yes, Franchesca is lovely--too bad for you fellas she's engaged!

K.Rock,
Thanks, lady! So nice of you to say so.

Makabit,
I am really interested in learning more about what happened to her once she got to Columbia. From what I've read, they gave her a work permit after she got off the plane. Still though, she seriously has drive to survive, doesn't she?
12:00 AM, January 09, 2012