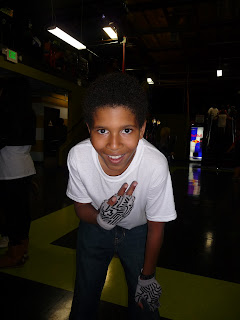 Think that 11-year-old boys are only wrapped up in pop culture and video games?

Spend some time with Mr. O and his friends and sure, you'll hear a bit about how much they despise Justin Bieber and how Batman Arkham Asylum is a great video game. But they're also discussing real issues with a curiosity and fervor missing from the conversation of many adults.

On Saturday afternoon Mr. O had his birthday party, and as I drove down the 101 Freeway with him and two of his best friends tucked into the backseat, I had the chance to overhear what the next generation is really thinking about.

1. Do people in Hiroshima and Nagasaki still feel the environmental effects of the atomic bombs? They say there's no way all that radiation is gone, and they wonder if they'd be able to survive a nuclear attack on Los Angeles.

2. What would it be like to grow up in either city, knowing you're walking where so many people died? Mr. O believes the spirits can still be felt and he wonders if ghosts hunters have ever visited.

3. Did George Bush know 9/11 was going to happen? They were quite divided on this and ended up deciding that Bush did not know, but other government officials probably did.

4. Was the way the U.S. military took out Osama bin Laden justified? They all believe he was a punk for hiding behind his wives and believe he should have been brought to trial or else put in the hands of the people "so they could do to him what the Libyans did to Gaddafi."

5. Yes, there are aliens! They're plotting how they can be the ones to bust into Area 51.

I'm so glad they're not shallow one-dimensional kids. I hope they don't lose this when they go to middle school next year.

OK, it wasn't all serious...there was some pop culture involved. One boy saw all my Depeche Mode stuff up in our house and started waxing poetic about how much he loves them. Seriously, that kid can come over to our house anytime!
Email Post
Labels: Boys Mr. O

Val said…
I'm trying to remember what my friends and I talked about when I was eleven. And I'm pretty sure we were not discussing nuclear fallout, conspiracy theories or terrorists.

I think the 24 hour TV news cycle combined with social networks and online news means today's kids are far ahead of kids of days past.

As you allude to, it will be interesting to see if this translates into more politically involved young people over time.

Liz Dwyer said…
Val,
I was DEFINITELY not talking about this stuff. I didn't even know conspiracy theories existed! You're probably right that the sheer amount of info available to kids influences them. I hope it turns out to be a good thing!