The End of The Bodhi Tree 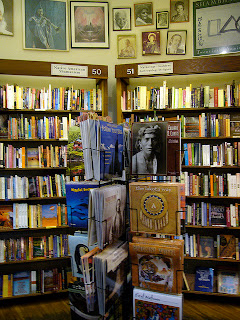 Los Angeles is known as a place people come when they want to forget the past and reinvent themselves. But when I moved here in 1998, I had no desire to pack my identity into a box and stuff it into a storage locker. Instead, I needed someplace to remind me of my roots--to remind me of who I am. Someplace where I could breathe deeply and feel at peace.

Other than the Compton school I taught in, I had a difficult time finding places like that. Everywhere I went I felt like I was watching and participating in a fleeting piece of performance art. And that made me hate this city.

However, one Saturday I decided I was being too harsh on the vapidness I saw around me, so I made plans to go explore Melrose Avenue. Unsurprisingly, I hated the whole scene and all the overpriced, trendy clothing stores and unhappy looking people that came with it. After 15 minutes or so, I got in my car. I didn't know where I was going, but, being new to the city, I figured I'd drive west on Melrose, and see where the street would take me.

The trendy shops gave way to what seemed to be fancy furniture stores, and soon after that, I spied a sign that said "Urth Caffe". It looked like a promising spot to grab a cup of coffee and chill so I turned on a side street, parked my car, and began walking back toward the cafe.

I never made it to Urth that day because on my way there, I passed the first bookstore I'd seen in nearly two months in Los Angeles, the Bodhi Tree.

As the stacks upon stacks of books in my home can attest, I've never been able to not go into a bookstore and this one looked friendly enough. I walked up the three or four steps to the entrance and went inside.

Crossing the threshold was like entering a new world. Inside I found a magical assortment of crystals, scented candles, incense, yoga supplies and world music. But the real treasure was the literature. The Bodhi Tree was full of books about the world's great religious and faith traditions, philosophy, self improvement, spiritual practice, and all forms of mysticism. It was the first place I truly felt at home in this city.

During that first year, I went to the Bodhi Tree more than anyplace else, And in the years since then, even though it wasn't exactly close to me, I headed there as much as I could. In its stacks, I came across books that changed me creatively--Michael Gelb's How to Think Like Leonardo Da Vinci and Julia Cameron's classic The Artist's Way.

Being there also made me feel less homesick for Chicago. The Bodhi Tree sold the same kind of candles that I was used to buying back at Heartland Cafe in my old Rogers Park neighborhood. But, moreso, I'd head to the Bodhi Tree simply because I liked it. The staff always had a kind word and a cup of tea for me and anyone else who entered. It was a place of peace, calm, and of learning and healing.

Even though I know nothing in this fragile world lasts forever, I suppose I thought the Bodhi Tree would always be here. But, after 41 years, on New Year's Eve, the Bodhi Tree closed it's doors. The owners are now in their seventies and, like many independent bookstores, sales are down significantly. They'd hoped for a buyer and still remain optimistic that someone will buy the store and relocate it, but so far, nothing has panned out.

As much as I wanted to, I couldn't make myself go over to say goodbye to the place that has meant so much to me over the 13 years I've lived in Los Angeles. I want to remember the Bodhi Tree as it was--full of warmth, positive energy, and plenty of good books. Bodhi Tree, you will be missed.

Nicole said…
Sad to hear that Bodhi Tree has closed its doors. I moved here in '98 too and was looking for a refuge in a spiritual wilderness. Found several great books at Bodhi Tree that helped me get through some rough times. It will be missed.
9:35 AM, January 04, 2012

Aisha said…
Wow, I am not even from California and I have heard of this bookstore. I wish I had remembered to visit it when I was in LA this summer.
2:10 PM, January 04, 2012

Liz Dwyer said…
Nicole,
You moved here in '98, too? Kindred spirits! I really hope they manage to reincarnate themselves somewhere.

Toni Campbell said…
I lived in LA for a year, left in '98 (that seems to be an important year; we should play those numbers...) and I never got around to visiting the Bodhi Tree.(After working all day at Barnes & Noble, the last place I wanted to go was another bookstore). I love metaphysical bookstores and as a career bookseller, I'm always sad to see one close.
12:53 PM, January 05, 2012