Dear Mr. President, I'll Never Ask You to Dance a Jig For Me

Someone tell Fort Worth, Texas resident Jennifer Wedel that this... 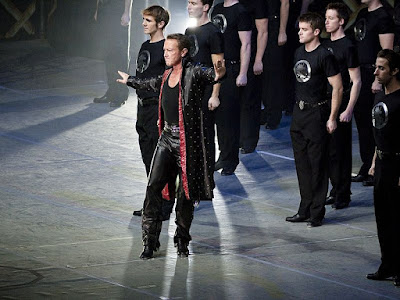 ...is not the President of the United States.

Today during President Obama's pretty cool Google+ hangout where he took questions from the public, Wedel had the chance to ask whatever less-serious--not on education, the economy, or the war--question she wanted. She had the nerve to say, "I was wondering if you could stand up and give us a little jig real quick."

Where was the Dowager Countess of Downton Abbey to give Wedel THE LOOK when we needed her?

I know Obama is half Irish and all but seriously, who in their right mind would ask the president of the most powerful nation in the free world to stand up and dance a jig?

But it gets worse. After he kindly demurred, explaining that Mrs. Obama generally makes fun of his dancing--nope, not all black folks can dance--but that he does sing every once in awhile--which we know from his well-done Al Green verse at The Apollo a week and a half ago--Wedel INTERRUPTED him to ask that he "sing for us."

I choked on my Earl Grey.

Was it racism? There is certainly a history in this nation of black Americans, no matter their accomplishments, being reduced by white people into a stereotype of shucking and jiving performers. Given that the disrespect shown to this president is already to the point that other politicians think they can point fingers all up in his face--something that is unprecedented in American history--the questions do take on a racist connotation, even if that was not Wedel's conscious intent.

Her questions were also evidence of poor manners and an overly familiar demeanor. People nowadays don't "get" that just because a prominent figure is being casual with you via a social media channel, that doesn't mean you turn around and get all homies unidos with him. Mr. Obama and I are undeniably equals in the sight of God, but I can still give him the respect his role requires. I mean, this wasn't a chat with some X-Factor contestants or the cast of Glee and she should've had the sense to realize the difference.

What really gets me is that Wedel asked those questions after the president told her to send her unemployed husband's resume to him. Heck, if the POTUS offered me that, you'd best believe I'd have better sense than to ask to ask him to dance or sing for me.
Email Post
Labels: Barack Obama Downton Abbey google Irish

Claudia Hall Christian said…
Okay seriously, I love that you watch these things. That said, I don't have any idea why someone would speak to the President like that. I'm still miffed at that woman in Arizona who put her finger in my President's face.

He has so much grace. I watch him and try to learn to deal with life with the same kind of grace. I'm sure he handled it well.

Liz Dwyer said…
Claudia,
It was cool to watch how technology enables more real conversation--and I was checking it out to see if he'd talk about education. I thought he was quite gracious when she asked him to dance/sing. I'm still shocked that she did that.
10:31 AM, January 31, 2012

Jameil said…
A jig??? And sing??? Say what now??? What would possess someone to ask the POTUS that?? Please, people. I read that he's given over 400 interviews in his presidency compared to 100+ for other presidents at the same point. People feel like they know him. Really know him. That's at least part of the foolishness he fields.
1:33 AM, February 02, 2012