Everybody Wants to See a Nearly Naked Man at the End of a 24-Mile Run, Right? 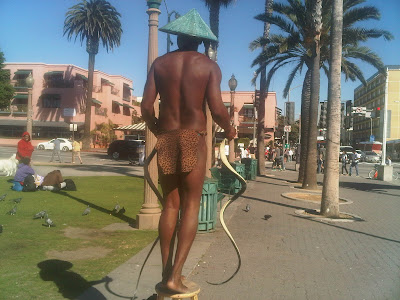 Imagine you're putting in the last steps of a grueling 24 mile run and as you reach the top of the hill at the Santa Monica Pier, you see the brotha above with his, er, snakes on display. I mean, does the recession have folks so desperate for dollars that they're willing to stand on a stool and pretend to be--I don't even know what to call that outfit...African stereotype?--complete with animal print skivvies and a couple of dollar store rubber snakes in the hopes that tourists will toss some cash into a can?

And yes he did turn around and wiggle his, uh, animal print jock strap front--for real, it was a jock strap-- in my direction. I was SO wishing I had my girl Diane's new t-shirt to fling at him.

Anyway, it's only 50 days till the Los Angeles Marathon which means that lately I've been putting in major training miles. Today's run was just 2.2 miles shy of a full marathon distance. I know some marathon training programs only have folks running 18 or 20 miles before race day, but my running club, the L.A. Leggers, runs a 20, 22, 24, and a 26 milers before easing up a bit (runners call it tapering) in the month before race day. That way you get multiple chances to figure out how to get yourself through the last section of the race.

No matter how many times I've run the kind of distance I did today, it's still no joke. It was so hot out there (thanks, January heat wave) and the air was so dry (thanks, Santa Ana winds) that I had plenty of time to psyche myself up by repeating endless you-can-do-it messages so that I could keep putting one foot in front of the other and actually get back to my car.

Seriously, I'm just an average person. I don't have superhuman powers that make me able to run 24 miles. I'm not a morning person either so me hauling myself out of bed at 5 a.m. on a Saturday morning after going to bed at 2 a.m. to go run long distances does not put a smile on my face. But it's all mental at this point.

Someone recently asked me why I post twitter and Facebook updates during my run--they wondered if it's distracting and if I'm not fully enjoying the running experience. One, I like to post about running because I think anybody can be a marathoner if they put the work in.

Two, if I tell the world I'm running 24 miles today, what am I going to do, turn around and only do 18 because I feel tired or my knee hurts? It's just not my personality. I like to be able to do what I say I'm going to do. Sometimes it doesn't work out because I don't have a clone and I have a tough time saying no to people. But with running, which is pretty much the only good/selfish thing I do for myself, I have to make it work.

You know what else works? Some hype tracks to put the bounce in the ounce really help make the hours spent running pass more quickly. I rocked this mix by Sander Van Doorn and this one by Dave Dresden, along with the latest podcasts by Dada Life. But that last mile and a half, I pulled out my you-are-almost-done-so-crank-it jams.

1. "Stars Come Out" by Zedd: This track is just bubbly electro perfection and it ALWAYS helps me pick up my pace. That's why I save it till the end:


2. "What Happens in Vegas" by Chuckie: Hands down one of the HOTTEST songs of the past year. I tend to really zone out to this track and so sometimes, I run the last mile just listening to this on repeat over and over:

3. "Sofi Needs a Ladder" by DeadMau5: I trucked the last half mile to this today. The first minute and a half is just genius. And when she starts singing "drop you like a needle on the record/watch you walk in circles hit the beat..." LOVE that.
Yeah, I was feeling all good, rocking my Deadmau5 and then I come up the hill and see homie standing nearly naked on that stool. I'd been concentrating so hard on finishing strong that I guess the stars decided I needed a little LA-style ridiculousness at the end.
Email Post
Labels: Dave Dresden los angeles marathon Music Running

Leah~Catherine. said…
kudos to you Ms. LosAngelista! I'm preparing for my first 5K, a long way from a full 26.2 but definitely a challenge and achievement for me. I'm glad you post- as it's not a distraction but totally inspiration for folx like myself...championing our own personal version of marathon training.
9:39 AM, January 29, 2012

I admire people who run. I have tried and tried and tried. I am just not a runner. A whiner? Yes. Not a runner. I actually like the posts my runner friends put up though. It makes me try and be healthier in even the smallest of ways.
7:26 PM, January 30, 2012

Liz Dwyer said…
Mrs. Elle,
So nice of you to offer your congrats and kudos to you for prepping for your first 5K. That's such a fun distance. Definitely enjoy it! :)

Logical Libby,
Ha! Maybe...although if he'd been at mile 15 when I was not so happy, he would've been a welcome distraction. I never could run till I did the Couch Potato to 5K program. It really eased me into it gradually, which was nice. I'm a big believe in smaller, incremental steps toward good health. They're much easier to maintain!
11:45 PM, January 30, 2012

Anonymous said…
I'll be there with you at the Marathon, but wa-a-a-y back with the walkers. We are the Weenie Walkers! I'm hoping for beautiful weather, too. Although I find the Santa Anas invigorating.
Good luck!
Jenny
2:06 PM, February 01, 2012

1969 said…
So proud of you. For every person that asks me why I feel the need to update my status on Facebook after my 5am workouts, there is someone that comes up to me and tells me that my daily workout posts inspire them.

I post them because somehow they make me feel accountable to my friends and family. I keep it up because now when they see me they are going to be looking for me to look fit and toned. LOL I need that pressure and motivation.