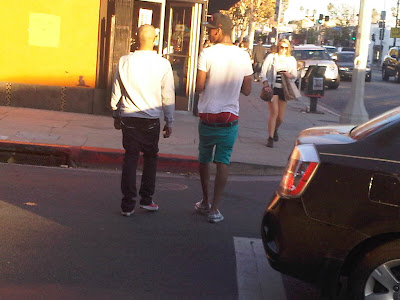 After 13 years in Los Angeles, I'm used to most of the over-the-top ridiculousness happening over on the trendy section of Melrose Avenue. Fortunately my sons aren't so jaded. They're still talking about this Captain Underpants duo that they saw on Saturday afternoon, particularly, the red rear-end fellow on the right.

Red Drawls is strolling along like it's normal to have your behind hanging out--obviously, he thinks he looks cool and hip. But Mr. T, Mr. O, and their friend Mr. H just about fell out on the sidewalk as he passed us.

"Eww, his BUTT is showing."

"That's disgusting! Why doesn't he pull up his shorts?"

But when they began chanting "Santa Claus underpants"--because, as Mr. T pointed out, "He has on Christmas colors"--over and over again, I knew I had to snap a photo with my phone.

Sure, this guy provided a few minutes of comedy, but really, is this necessary? Why even put on the shorts? Just wear the underwear out in public if it's like that--and then tell everyone you're making the ultimate fashion statement.

Sigh. I really wonder how long it will be before the whole sagging thing falls out of fashion. I hope that day arrives sooner rather than later because seriously fellas, having your butt hanging out like this is not a good look.
Email Post
Labels: fashion Los Angeles Melrose Avenue Mr. O Mr. T

ick said…
Hideously unattractive. He just looks like his pants are too loose. If he really wants to make a fashion statement, how about a pink miniskirt and heels?
12:02 AM, December 13, 2011

Lisa Blah Blah said…
You have just stumbled upon a pet peeve of mine. Ecch, my 23-year-old nephew wears his pants sagging and it makes me want to smack him! It doesn't look cool, it just looks stupid. Your AZZ is hanging out! Put it away!
3:14 PM, December 13, 2011

Aisha said…
I just did some mental math, and I have been noticing sagging for the last 18 years. I don't think it's going away anytime son unfortunately.
5:00 PM, December 13, 2011

CallMeSu said…
Losangelista this saggy-undies trend is only outdone by saggy multi-pant trend. Just Sunday I was driving and I happened upon some young men waiting for the bus. One of the young men hand on at least 3 pairs of pants. Each meticulously layered to achieve to optimal sagging effect. He looked like a bum in the winter wearing every article of clothing he had to keep warm.
9:55 AM, December 14, 2011