Some Risks Are Worth Taking 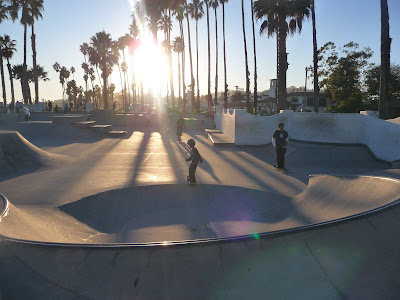 On Monday we headed up the coast to Santa Barbara and--much to T's joy--I took him to the city's beachfront skate park. I watched him ride his board for over two hours, well past the moment when the shadows began to lengthen and sunset's chill began to creep in from the Pacific.

What's remarkable to me is that T still loves skating even though on the first day of summer vacation he fell off his skateboard and broke his wrist. Now he's back at it--going harder then ever.

As I watched him zoom around, I got to thinking about how it's that time of year when everyone's contemplating what resolutions they'll make for the new year and plotting what they're going to stick on their vision board for 2012. While I don't have any specific resolutions or visioning completely thought out--why does the Gregorian new year always seem to sneak up on me?--I do know one thing: I think I want to be more like T.

T frequently says we are twins. And indeed, our temperaments are very similar--we've both been caught dancing on tables before--but if I broke my wrist you couldn't pay me to get back on a skateboard. It wouldn't matter how much I enjoyed skating.

Indeed, I've admired T's fearlessness and his sense of adventure for several years. He reminds me that there are risks I should be taking that I'm not. I'm not talking about taking immature, jackass-style risks. There's no glory in being stupid and putting myself in harms way.  It's just that we adults--ok, I tend to think of every.single.thing that could possibly go wrong. T doesn't. I miss not feeling the need to over-analyze all the details.

That said I suppose my equivalent of getting back on a skateboard is how even though I've been in several car accidents--all the other party's fault, thanks dumb Angelenos--I'm still driving a car. However, some of the fun of driving is gone. I'm always thinking someone's going to crash into me and that one of these days, the luck of the Irish may be M.I.A. and I may not walk away. I don't think T is thinking a broken bone is going to happen to him again.

So in 2012 and beyond--if that whole Mayan calendar turns out to be a hoax--here's to remembering that some risks are worth taking. Thanks, Mr. T, for the reminder.