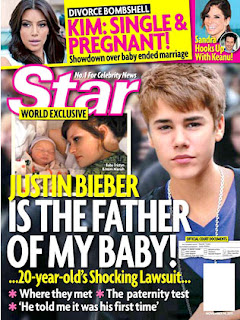 Greece is falling apart, Google Reader has been taken away, and Herman Cain is still Whatchu talkin 'bout, Wills-ing those sexual harassment claims. But c'mon, let's talk about the important things: Is Justin Bieber a baby daddy?

My vote? It's possible. Bieber may seem innocent and wholesome, but at one point in time, so did Lindsay Lohan. Now she's cleaning the L.A. County morgue for not fulfilling the terms of her probation--for the eleventh million time.

But back to El Bieber. By coming forward and saying Bieber is the father, his 20-year-old accuser, Mariah Yeater, admitted she committed statutory rape. If it's all true, she should go to jail.

However, what I also wonder is, given that he's a minor, is it ethical for so many news outlets and gossip sites to print her statement verbatim? Everybody's snickering over the graphic details, but as I was reading her account, I was like, eww, this is a. gross, b. gross like horrible fan fiction, and c. he's a minor. One who's a pop star, but still, he's only 17.

I don't think we'd be snickering if Mariah was the underage one in this story. If a male pop star had sex with an underage girl, he'd be in big trouble, just like R.Kelly, right? And if said pop star got the girl preggo, he'd be in jail. be doing community service in the morgue with LiLo, right?

Bieber's court date isn't till December so we have a whole month to hear him singing the tune that Michael sang a generation ago. If he's not the baby daddy, he should soooo remake "Billie Jean".