Muppets Are For the Lovers, the Dreamers and Me


Did you have a wonderful Thanksgiving?

I have to say thanks to all the staff working in my local grocery store on a holiday because I was up in there three times today. Somehow I'd forgotten to buy graham crackers for the pumpkin pie crust (trip one) and whipped cream for the pumpkin pies (trip two to the store), and even though I told my husband to get fresh green beans, he bought canned ones home.

Yeah, by the third visit I had to make sure I went to a different checker because seriously, it was about to be a "You, again?" scenario.

This is the first Thanksgiving in almost five years that we haven't had anyone over or gone to anyone else's house. The past few years I've gone to Thanksgiving with a dear friend and her family, but then my friend moved out of LA this summer--so we had a lot of sadness around the table wishing they were still here. That said, the dinner was fabulous--both the cooking and the eating with my family.

After all the dishes were washed--which felt like it took forever--we went to the movies to see "The Muppets". And for the record, I would've been up in the theatre even if I was a single woman with no kids. 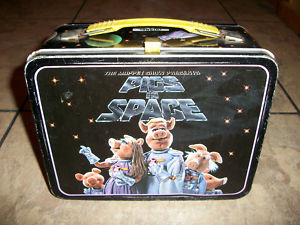 I mean, I still miss my childhood Pigs in Space lunchbox. I also had a Kermit stuffed animal that I slept with and I loved the two grumpy old men that sit in the balcony on "The Muppet Show".

I'm not going to reveal any plot details but the movie is SO good. Everybody in my family loved it--we were talking about it the whole car ride home and after we got home, we still talked about it while eating our homemade pumpkin pie.

I remember going to see "The Muppet Movie" when I was a kid, and I fell in love with the song "Rainbow Connection" that opens the film.  It was nice to hear it again in "The Muppets". OK, that's one detail but that's IT I'm not telling you anything else!

When "Rainbow Connection" came on in the film, I immediately started singing along--as did most of the adults in the theatre--and 8-year-old Mr. T turned to me in surprise and said, "You know this song???" But by the time the chorus came along the second time, he was singing along with me.

It was such a sweet moment that I almost started bawling right there in my seat. I have a pretty awful memory but it was one of those moments that I know I'll remember when he's all grown up. And I certainly hope in this jaded world that when he grows up he doesn't forget to be a lover and dreamer.