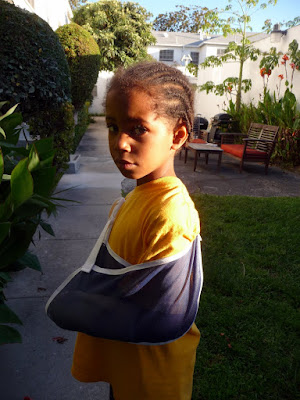 I grew up down the street from a boy whose mom rushed him to the doctor if he had even the slightest runny nose. I am not that mom—and as I sat in an emergency room on Sunday night with 7-year-old Mr. T and his broken wrist, I know why I'm not.

It's hard for me to interact with an industry that will let an injured child sit in a waiting area and cry, all while calmly asking the questions that will ensure they get paid. "Mom, what's your employer's address? Is the patient also on your work insurance or just dad's insurance?" Who cares about the child with a bag of frozen peas across his wrist, a makeshift sling made out of a bath towel holding it up?

Perversely, I found myself wanting to tell the receptionist, "I don't have insurance," just so I could see what she'd say. Would we be turned away? Would I be told that I'd be responsible for the entire bill? Made to pay the cost upfront? Of course, I'm not as insane as that, and so after all the forms were filled out, and after the insurance card and my state-issued ID had been copied, Mr. T got to get his temperature and blood pressure checked by a nurse who gave us some paperwork to take to another part of the ER.

Two hours later as we sat waiting for x-ray results, another employee arrived to collect the $75 insurance co-payment. As I handed over my card, I again wondered, what would happen if I said to them, "I don't have any money,"? Would they refuse to show the x-ray results? Toss us out on our behinds and say to my son, "Good luck with that, homie,"?

"So, you expect health care to be free?" asked a friend the other night after listening to me rant about this. And, yeah, I guess I do. I know how crappy it is to get a $15,000 bill from a hospital after having a baby because the insurance company screwed something up--and then spending hours arguing on the phone with that insurance company to get part of that bill paid.

Indeed, as any American who has been to the doctor knows first-hand, somewhere along the way our health care system stopped being about either health or caring. It's about money. We've had massive fights about this in this country over the past couple of years, and, quite frankly, the fixes that have been put in place aren't enough. If they are, why do we have an old man robbing a bank for $1 so he can go to PRISON in order to get health care? Europe's no picnic these days but I'm tired of being jealous of my friends there who don't have to experience the pay-to-play when they go to the doctor. When I tell them what happens when we go to the doctor or hospital here in the States, they can't imagine having to live like this.

Unlike the mom from my childhood, I avoid the doctor. My kids aren't sick too frequently, but when they are, I freely admit that I don't take them. Your stomach hurts? Go lie down. You're vomiting? You'll feel better once you've thrown up a few times. Fever? Here's some Tylenol and a cool cloth for your forehead.

On Wednesday my son got his splint replaced with a cast. His arm will be healed in a month. But what will it take to really heal--to really change--the way we provide healthcare in this country?
Email Post
Labels: african american europe health health care health insurance healthcare kids Money Mr. T prison

Lisa Blah Blah said…
Hoo, girl--don't even let me commence. I went to the doctor for persistent headaches in January. She couldn't see anything wrong but decided she would run a "standard blood panel" since I hadn't had a checkup in nearly three years. Weeks later, I was blown away to discover my insurance WOULD NOT COVER this and I was on the hook for $1,100. Shut the front door! I ended up having to beg the doctor's office for a discount due to hardship (my husband unemployed for over a year) and still had to fork over $300. I pay nearly $1200/month for health insurance and I still had to pay out of pocket. The American health care system is a disgrace.

Anonymous said…
When I went to the emergency room because I was going to kill myself - yes, suicide - I almost wanted to laugh as they put me through all the insurance questions before taking me back. Here I was in a life-threatening situation, bawling, scared, turning my life over, saying I needed to be admitted to the psych ward or else I was going home to kill myself - and they were asking me about my co-pay.
6:00 PM, June 30, 2011

nyc/caribbean ragazza said…
Lisa, you pay almost 1200 a month for health insurance? That is outrageous.

True, Italy has it's problems. And it can be a pain dealing with red tape when you go to the hospital. However, a friend's husband was hit by a American tourist when he was on his scooter. It was a hit and run. Who knows what drama it would've been to try and track down the driver and get his insurance etc etc.

The husband was in the hospital for a while. He was not in a single room and you have to bring things to the hospital that in America come with your room. His bill after x-ray, cast, exams, etc. etc. was less than 100 euros.

All these people screaming in America about how our health system is the best, are delusional. If you're rich, it is excellent. What about those people who have jobs but their companies don't offer insurance? The people who have lost their jobs? What about focusing on preventative health care so less people have to use the ER for primary care.

We have a serious problem and unfortunately I don't think it will get better anytime soon.

I'm so sorry to hear T's wrist and what you had to go through.

As a kid I went to the same pediatrician and dentist every year. I thought it was normal. I didn't realize until I was older and had horrible insurance how lucky my parents were to have jobs with great plans. Yes, they had to strike on several occasions for those benefits. Unfortunately jobs like that are fare and few between these days.
1:02 AM, July 01, 2011

sippinwineman said…
I NEVER realized how lucky I am until I read the other comments.

Liz- I've only had experiences like your hospital visit when I had to go to a state (read that as 'city' here in DC) run hospital. Unless you're bleeding AND vomiting the wait time can be tremendous.

ID and insurance cards seem to be just the beginning of the price of admission. Then there's the co-pays and insurance-won't-pays. smdh.

I pay A HELL OF A LOT for my insurance. And I'm lucky I do. 4 years ago (just before I'd first read your blog), I'd had quintuple bypass surgery. I was in a private/single room AND I was in the hospital for nearly 10 days but my bill was only like a grand and a half. And although I'm FAR from rich, I was amazed at how relatively low that was.

T is a survivor I'm sure and all around cool kid.

Liz Dwyer said…
Lisa,
What??? See, this is the kind of stuff that worries me with insurance companies being the ones who get to decide what's a necessary procedure and what's not. That's INSANE that you have to pay that much out of pocket, but if you don't, and something happens to you or your girls... actually, you know that healthcare-for-all-kids mandate that John Deasy started when he first became supe of LAUSD? But I find with those kinds of programs that you have to be making like $500 a month for a family of four or something crazy like that.

Stefanie,
Thanks for saying hello and welcome. I'll try to post more than I have been lately. I need to get on the ball! ;)

Gradmommy,
STOP IT! What??? Oh that is just the epitome of immoral. I am so sorry that that happened to you. And angry. The last thing anybody needs to think about in that situation is a dang copay. That said, as the sister of someone who took that step and ended things, I'm so glad that you reached out for help.

Nick,
Pigs will fly, indeed. It's sad just how much money goes to fighting wars instead of taking care of people.

NYC/CR
See, this is exactly what I'm talking about. Less than 100 euros for all that. Wow. I am JEALOUS. People are delusional here. It's like we have Stockholm Syndrome with our health care system.

Sippinwineman
Wow, quintuple bypass? That's intense. Glad you made it through that alright and that you had the insurance you did.

I wish I could say all this went down at a state/city hospital, but this one was a private hospital. T is definitely a survivor. I need to post a picture of him with his cool blue cast. He thinks he's hot stuff with it when people sign it. And thanks for saying I'm a great mom.

Oh, and the $1,000 deductible? We don't have that insurance anymore. That's one thing about employers these days--always changing the insurance offered on folks. SMH.
10:34 PM, July 01, 2011

Doodling said…
Oh, god, poor kid...:( The same thing happened to me when I was thirteen, only it was my leg and I waited in the emergency room for eight hours with my dad. Agreed, hospitals are so screwed up.

Rosita said…
Sorry to hear about T's arm. I hate taking my boys to the ER because of the runaround. And I hear you about the envy of your friends that live in Europe and elsewhere. I lived in France for 3 years, and it is such a different experience.

Although I did have a good experience the last time I was there. I had to take my 6 month in because he was having an allergic reaction to something he ate (very scary but thankfully ended well).

I was at my sister's place, so it wasn't our regular hospital. We were seen and treated and they did the insurance as we left. You couldn't get out the doors until you did the insurance, but hey, at least we were seen first. And there was almost no wait (less than 5 mins and an empty waiting room - although my sister assures me that was very rare).

When at home, we actually drive to a hospital about 15 miles away instead of the one 2 miles from us because even though it takes longer to get there, we have never had to wait over an hour to be triaged and they only do basic stuff at the front and then come to get the rest of the insurance info when you are in back waiting to be seen, or to hear back from the doctor. Still crazy, but better.
10:52 AM, July 05, 2011