8 Things I'm Thinking About Instead of Anthony Weiner's Penisgate Problem 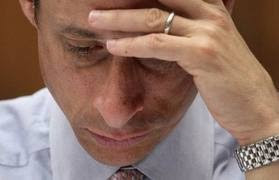 I know some people think Anthony Weiner sending some sexytimes pictures to a woman (or are there more women now?) is the end-all-be-all of life, but I'm having a hard time not giving the whole situation an epic side eye. It's not that I believe what Weiner did was right, but I'm not his wife.

I'm also thinking about a few other more important things, like...

1) Insomnia: Some nights I'm sleeping less than an hour. Last night I fell asleep in a chair. For 45 minutes. Stress.

2) The Cubs Have Lost Their Past Seven Games: Really. This is supposed to be the year they win the world series and they lost 8-2 last night.

3) My Dog Ate ANOTHER Pair of My Shoes: She's a year old. Shouldn't she be over this by now?

4) The Homeless Dude at the Freeway Exit By My House: He even has a sign admitting that if you give him money, he's gonna take it to the liquor store. Now that it's BBQ time, there are also homeless dudes digging through the trash cans at my local park. My youngest is still freaked over a guy pushing his shopping cart down the street. Dude got mad at my youngest looking at him through the car window, so he ran over, banged on the glass and flipped out on my son.

5) The Drug Dealers Down the Hill: Business is booming (thanks, hipsters!) Violent crime is up significantly in my neighborhood and I can't let my kids walk to the corner store. Not only are they criminals, they're annoying, too. I walked down the hill with one of my sons the other day and these fools were all, "You speak Spanish, negrita? You wanna lil someting-ting-ting? Hey, NEGRITA! I'm talkin' to you!" My son started balling up his fists. "Um, are they calling you the n-word, mom?" "No, baby, keep walking." "OK, but he better watch out because I know kung fu." "Yeah, well they probably have guns or knives, so keep it moving."

6) Broke At the Grocery Store: We're about to be the beans and rice sounds nice house. I have two growing boys and they are eating a serious hole in my pocketbook. And what really makes me mad is that it would be cheaper to feed them ramen noodles and mac-n-cheese than to actually buy fresh fruits and veggies for a salad every night. We already eat vegetarian, so my grocery bills aren't as high as they could be, but still, things are RIDICULOUS.

7) My Son Ripped Up His Pants Because He Was Bored In School: My 7-year-old has a palm sized hole in the leg of his jeans. He says he discovered a small hole in them and was SO bored in class today that he began enlarging it. When I picked him up, I wondered if a pack of wild animals had attacked him. I'm annoyed that he thought it was OK to tear up his clothes. I'm annoyed that he was so unengaged in what was going on in his classroom that he got to rip a hole in his pants. I'm annoyed because dangit, budget-wise, I really needed those pants to last through the summer.

8) I Know Unemployed People: Those 9 percent unemployment numbers? Double that for black folks. The next time someone tells me I should get a bike and ride it to be more environmentally friendly... yeah, I know folks who ride bikes, not because they're trying to help the environment, but because they have no money for the bus or gas for their car. They apply to jobs and are told there are "We have over 500 other applicants so we'll get back to you."

But I'm supposed to be thinking about whether Weiner meant to tweet his underwear to the world?''

Actually, Wiener should be a Californian. Since he's not resigning, I can only guess that he's consulted with California politicians about how to stay alive politically despite mayjah scandal.

For example, Los Angeles Mayor Antonio Villaraigosa cheated on his wife with a Telemundo reporter. There was DRAMA, the Villaraigosa's got divorced and he STILL got re-elected. Escandoloso for reals. Then there's California Lieutenant Governor Gavin Newsom. He cheated with his campaign manager's wife. Still got re-elected as SFO mayor and is now Lietenant Governor.

nick said…
It's amazing what the voters will turn a blind eye to. The record has to be held by Signore Berlusconi and his endless leg-over shenanigans, not to mention all the immunity claims, legal changes in his favour, giving jobs to his pals etc. He still comes up smelling of roses. Or at any rate not quite smelling of manure.

Sorry about your cash-flow problems. Maybe you can challenge your boys to think of a few ways to economise? Which might make them think twice about ripping up their pants.
6:50 AM, June 08, 2011

1969 said…
I am amazed at what constitutes as news. If he was inappropriate, fire him and be done with it. I don't want to read or hear about him anymore.

Annette said…
Patch the pants (remember iron on patches?) He wears enough of those he'll quit. At least that worked with my son. For some reason I thought you were on the West Side, but maybe not? If there are any community gardens you can join, that helps with the food bill. Also 30-day cooking techniques. Got a fresh&Easy or Farmers Market to go to? Those help a lot too.
12:34 PM, June 08, 2011

nyc/caribbean ragazza said…
Sorry to hear about crime going up in your area due to the drug dealers. I dealt with that in DC and it was no joke.

The GOP need to shut their mouths about Wiener. I have never heard him once pontificate on or about morality. Therefore this issue, unless he broke some laws, is between him and his wife.

They are pretty good about economizing, but the cost of food is really skyrocketing. I used to spend $100/week on food. Now it's up to like $125--buying pretty much the same stuff. :(

And as for Weiner, yeah, I'm over it. Folks just need to stop writing about him.

Annette,
GOOD idea! OK, I got your email and WOW, virtual hug! SO many good ideas. No, I'm over in Hipstervania. Pricey Hollywood or Silver Lake farmer's markets.

NYC/CR,
Yeah, I can see I need to start calling LAPD again about the loitering on the corner. These fools need to go.