The Headache That Won't Go Away 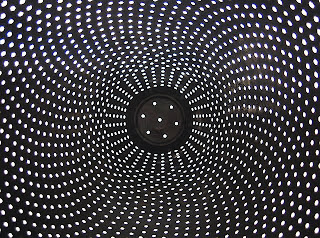 Over the years I've known a few people who've had severe migraines, but until the past few days, I was never one to suffer from one. But, sometime after lunch on Wednesday, my head began to ache. It got progressively worse during a two-hour drive home in hellish traffic, and the pain just never went away.

By Thursday morning I kept getting the sensation that things were moving. On the way to drop my kids off at school, I thought we were having an earthquake, because things seemed to be moving, but everyone else in the car was like, um, no mom, nothing's moving. My vision/head sort of felt like this photo, except everything was swirling around. But, I did what other irrational people who are too arrogant to admit that something is very wrong do: I went to work...where my condition quickly deteriorated.

The area behind my right eye felt like it was being stabbed. I couldn't look at a computer screen for too long. I vomited twice and had to be taken home by one of my colleagues. Talk about embarrassing!

I'm so used to always being on the go, so it was hard to admit I couldn't do anything but stay in my room with the curtains drawn and cold compresses and ice packs on my forehead --and that's been my life over the past day. I have gotten a LOT of sleep, so that's probably a good thing. But of course, the minute I began feeling a little better, I decided to drive to Rite Aid to get some medicine and good grief, I thought I was going to crash. BAD idea.

Staring at a computer screen doesn't feel so good, so whew, relief that I'm halfway decent at typing without looking at the keyboard! I hope this headache is on its way out...and gosh, now I'm worried about what I'm going to do if it comes back.

Jen said…
My mom had a headache that lasted for weeks. Turned out she had hyperparathyroidism. Hope yours goes away soon.
5:43 AM, June 25, 2011

Daenel T. said…
I have migraines and your description is exactly how I feel two days before my cycle. Kid you not it's like clock work. The only thing that seems to offer enough relief for me to accomplish *something* is Advil Migraine. It doesn't rid the headache but it eases it. My doctor also told me to try water therapy ~ hot water, then cold water on the hands...
7:45 AM, June 25, 2011

K. Rock said…
I was recently diagnosed with ocular migraines (when you lose the vision in your eyes followed by a headache). It sucks. I havent experienced the level of headache you have just experienced. I hope things get better for you. Go get a prescription for something.
8:36 AM, June 25, 2011

Liz Dwyer said…
Jen,
I had to look that up because I wasn't sure what it was...your poor mum. Is she alright now? I am feeling MUCH better today. Whew.

Sippinwineman,
Yeah, I need to go to the doctor for sure. It's about that time of year for a checkup so I'll have to add this to my laundry list of things to talk about within the 4 seconds you get with the doc.

DaenelT,
You experience that every month??? Ugh. I feel for you. The water therapy is interesting. I am much better today, thank goodness, because I just could NOT deal. Now I'm terrified of if/when the headaches will come back.

K.Rock,
So sorry you've been diagnosed with that. How often do you get the headaches? A friend told me I should also get checked for vertigo because of how I thought we were having an earthquake. Yes, a prescription of some sort is needed because OTC wasn't working, not even that Excedrin migraine.
4:45 PM, June 25, 2011

Druzelle Cederquist said…
Not so long ago my friend went to the hospital with a serious headache. Hospital gave fluid to my friend because she was dehydrated. She'd been stressed from studying, did not eat or sleep well. That same week I saw a blurb on the Today show about migraines. They confirmed some triggers can be lack of sleep and dehydration. When i get the beginning of a visual migraine I stop, drink some coffee (expands constricting blood vessels) and relax - like lie down, maybe soft music - and I have been very fortunate not to get a full-blown migraine. I know you have sleep issues, but maybe look at what you've added on to your to-do, and how do you give yourself transition time in-between things. I realize with a family that is not always your call. Anyway, I get these things when I feel pulled in several directions, and usually when I THINK I have everything under control. Hope you feel much better and don't ever get one of these again!
6:02 PM, June 25, 2011

Anonymous said…
I suffer from migraines, and had to learn over time what triggered it. Medicine of any kind, prescription or otherwise, just caused a cycle of more headaches for me, known as rebound. Red onions, most types of red wine, chocolate...and birth control pills. I avoid them all. And of course, stress. I've had migraines for days before, but once I got my stress under control through yoga, getting good sleep, exercise, and meditation, they are few and far between now.
8:36 PM, June 25, 2011