The Return of El DeBarge, King of the Light Skinned Dudes 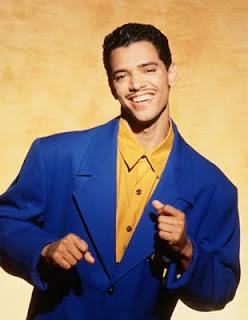 Can we talk about the King of the Light Skinned Dudes at last night's BET Awards show? And no, I don't mean that awful-sounding pseudo-rapper Drake. I'm talking about the original, the one and only El DeBarge.

El is, of course, the most famous member of the esteemed Motown-bred DeBarge singing family. They had a slew of big hits in the early '80s and El embarked on a successful solo career back in 1986.

If you're wondering why I call him King of the Light Skinned Dudes... back when El first came out, all the girls oohed and ahhed over how good he looked and they wanted a guy with light skin and "good" hair, too.

If Facebook had existed back in the 1980's, there would've been a "I wanna have El DeBarge's baby" group and pretty much every girl I knew would've signed up. As it was, next thing you know, a bunch of lighter skinned singers starting hitting the '80's airwaves. It became this weird, trendy, sad thing -and El was the king.

King or not, unfortunately, for many years El, and the entire DeBarge family, have been plagued by domestic violence and substance abuse problems. Revelations that the DeBarge's father molested the one sister in the family, Bunny, emerged in 2008, the same year a judge sentenced El to two years in prison for crack possession.

Since an early release from prison in the fall of 2009, the man's been making music and focusing on his recovery. Forty-nine year-old El made a seriously triumphant comeback last night. He made all the other gimmicky, off-key singers and boring rappers look and sound, well, gimmicky and boring.

El reminded me that when you see someone, you see all of them, soul included. His soul seemed radiant. He seemed healed, and his performance was so on-point, for a second there I thought it was 1985 and I was back in high school.

Nerd Girl said…
He did a FABULOUS job! I was so pleased. He sounded so good, and darned if I wasn't transported back to my days at Claremont High - where my best friend did indeed want to marry/procreate with El. Or Al B. Sure. Me? I had a thing for Jalil from Whodini!!!
9:02 AM, June 28, 2010

Carolyn (Diary of a Sewing Fanatic) said…
I suffered through the first hour of the BET Awards wondering when the moment that this award show always transcends the others was coming...or if it was coming...and then El DeBarge hit the stage and I screamed like I was 17 again! Yes, he had an amazing comeback last night but I have to also give props to Chris Brown who not only did the damn thing but redeemed himself with his promise when he received the Viewers Choice award!

Tracy said…
My 38 year old sister went beserk! As soon as I saw El on the stage, I knew my phone would be ringing! I was too young to be crazy in love with El, but I know all of DeBarge's songs cause that's all my sister played! LOL! DeBarge, Michael Jackson, and New Edition, 24/7 in our home growing up.

Liz Dwyer said…
Nerd Girl,
Absolutely fabulous! It was such a surprise to see him -- just when I was completely bored and thinking the show was too wack to keep watching just to see Prince, El came out and did his thang!

Carolyn,
Me too! I was starting to think the moment would never come. El had me in tears - so nice to see him looking like he has stuff together.

And then Patti kicking those uncomfortable azz shoes off and Alicia jumping up on that piano - outta control!

As for CB, he and El have a LOT in common as far as domestic violence goes. El's no angel either in that regard. I don't know why but I'm not so swayed by Breezy's tears. Maybe because I know someone from that police division that responded to the call and saw ALL the photos of RiRi. Maybe because he tried to front like he could just pick back up where he'd been in his career. I don't know. Maybe because he didn't do jail time and El did.

Yeah, I hope he becomes a real advocate against domestic violence and comes forward and speaks to the young men and women that are his fans - the ones that don't know any better and are still hollering that RiRi deserved it.That would show real effort and redeem him.

Lisa Johnson said…
Thanks for sharing this video! I don't have cable, so I missed him, but I was on twitter and read all the excited tweets. This took me back! I crushed a bit on El, but my heart always belonged to Al B. : )
9:15 AM, June 29, 2010

Liz Dwyer said…
1969,
Absolutely the best. They should've put him in the Prince tribute instead of that awful Trey Songz. Then again, can El's voice even get low enough to sing When Doves Cry?

Sundry,
Totally nailed it. I hope he can keep up sobriety despite the return of the spotlight.