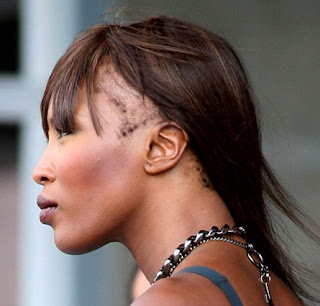 Naomi Campbell's hairline got on Twitter and Facebook tonight and it told all the haters to STFU.
Seriously, why's the world shocked over this paparazzi picture of Naomi's hair loss? What did everyone think was up under her wigs and weaves? A luxurious mane of natural hair?
OK, let me retract that question because I realize there are probably people who think the hair on Naomi's head's been growing out of her scalp - Just like they think Beyonce's hair is all hers. Poor delusional people...
Anyway, the world's wondering, how did this happen to Naomi? Forget that boring oil spill in the Gulf... what is going on with this sista's hurr???
Till Naomi comes forward and does a sit down with Oprah or Tyra Banks, I guess we'll be left to speculate. Many are guessing that she's suffering from alopecia due to constantly wearing weaves and tight extensions.
For everyone who tsk-tsks her for weaving it up, let me ask you this: If she wanted to be a high fashion model, what was she supposed to do? Tell designers and photographers that she doesn't believe in straightening her hair and getting it styled?
I guess she could've said that and gone and been a super hot bank teller. But I think she probably wanted to work, so she went along with it.
Remember, Naomi's been in the game a LONG time. I doubt that in the 25-30 years she's been ruling the catwalk that we've ever seen her natural hair. And, even though American Apparel's current suggested policy is that African American female employees should wear their hair natural... that trendy ishtar is not the norm in the fashion world.
One thing I haven't seen discussed too much is that Naomi might be losing her hair naturally. Even though it's not discussed, women can go bald, too. It happens and if that's the case, what's wrong with her rocking a wig?
The bottom line is that no matter how bald headed Naomi gets or how many wigs or weaves she wears, she will always be an amazingly beautiful woman. She could shave her head and draw some hair on with a sharpie and she'd still be hotter than 99% of the OTHER WOMEN (so much for sisterhood, right?) who spent time online today making fun of her.
My heart goes out to Naomi. Yes, she throws BlackBerry's and dates shady Russians, but I can't imagine having unflattering photos of me plastered all over the Internet. Whatever's going on with her hair, I hope she can resolve it for her.
Email Post
Labels: alopecia American Apparel bald Beyonce black women fashion Hair lacefront models Naomi Campbell natural hair Oprah paparazzi Tyra Banks weaves

Carolyn (Diary of a Sewing Fanatic) said…
I don't facebook so I've heard none of this...however, I'm not surprised in the reactions or the fact that she's losing her hairline. And I join you in your good wishes for her...they will be showing those photos on the day they announce her death...*sigh*
6:11 AM, June 30, 2010

Tracy said…
Well, they've finally got something over on Naomi and they're gonna milk it for all it's worth! Besides the bad attitude, one thing the media hates about Naomi is that she's a black woman who knows she's beautiful! And she obviously takes pride in her beauty. They're loving this photo, for sure.

I don't know if she has female pattern baldness, but I know that wearing all kinds of weaves and wigs for 25 years is not good for our delicate afro textured hair. But like Liz said, hairline or no hairline, the woman is still freakishly gorgeous and, I'm sure, better looking than everyone trying to clown her.
7:12 AM, June 30, 2010

nyc/caribbean ragazza said…
Naomi is being clowned because she treats "the little people" like dirt, not because she's a beautiful black woman.

Naomi is an amazing model. I'm glad she's still holding it down.

However, I do know people who have worked with her and well, it's hard for me to feel sorry for her.

Liz Dwyer said…
Carolyn,
Yep, the media loves to pull stuff out like this when a celeb dies. Maybe not when it's first announced, but they get around to it eventually. Like the day after the death is announced.

Tracy,
I have a feeling we'll be seeing more pictures like this in the future of lots of celebs -Naomi has access to some of the best stylists in the world, and this is the effect of long term use of weaves. I read somewhere that Posh Spice & Britney Spears have had this happen to them, too. It's a shame.

Speaking of anger issues, just imagine how much she wants to whoop ass on the photog that took this picture. She probably wants to KILL the man!
7:53 AM, June 30, 2010

Kandeezie said…
It's too bad most people don't see that women can be beautiful without straight hair. If she could truly go bald and draw on hair with a sharpie, she wouldn't be in this mess. Poor thing.
7:54 AM, June 30, 2010

Liz Dwyer said…
Kandeezie,
Yes, we sure can be beautiful without straight hair. But every makeover show out there morphs the curly haired woman a straight haired woman. It's annoying, to say the least.

One of the things I meant to write last night is how after I stopped straightening/blow drying/flat ironing my hair, my hairline grew back a lot. I "felt" like my hairline had gotten thinner over the years, but it wasn't till I went natural that I really saw just how bad all that chemical and heat damage was.
8:12 AM, June 30, 2010

Kandeezie said…
@LA - YES! When I went natural, the shedding stopped. All the chemicals are hormone replicators, which makes it a dangerous breeding ground for overall health issues too.

Funny thing, since going natural, my boys love curly hair even more and spot out all the natural hair women doing their thing! They're like "look mommy, she's beautiful!" Yup! I'm training the next generation to love natural hair one kid at a time.
8:22 AM, June 30, 2010

Tafari said…
Im sorry but those edges are ATE UP like a mutha fucka! She needs to see a Detroit hair weave master until that hairline & kitchen have been resorted.

Or she can say fuck it all & rock it bald & really make a statement. It works for Alek Wek.

Aminah said…
I hate that she got caught out there looking like this. However, I have to ask doesn't she have better weaves/wigs than this? Where's her stylist?

Anonymous said…
I love your kind comments. Thanks so much; you are an angel! My hair fell out because of hormones (and I also suspect my taking a powereful anti-acne drug). My hairline is destroyed, too, as is my entire head. I wear a weave because I'm NOT courageous enough to go bald. I was sooo happy when Janet Jackson showed her hair recently and in a shape that indicated either she was starting from close to scratch AND thinning from extensions and weaves. How utterly STRONG she is for making that move; she's given me courage to swap my weave for a wig (I'd wear my natural hair in the privacy of my home, especially while I'm single).

Your comments are especially appreciated because I also want to say SCREW you those who want to throw shade, have jokes, and ridicule her. What's a Black woman to do when so many out there -- including US and especially Black men -- have so little love for us? So, when Black women run to the hills for other communities and non-Black people, especially men? I bid them peace and love.
5:31 AM, July 01, 2010

Liz Dwyer said…
Kandeezie,
Aww, so sweet to hear that about your boys. Mine are the same. They used to prefer straight hair, but their attitude has really changed.

I worry about the long-term health effects of hair chemicals - I wonder if there have been any health studies on that.

Dirty Red,
If her hairline could talk, I'm sure it would have PLENTY more to say. ;)

Tafari,
In a fair and just world, she could be bald and proud, but you know how the fashion world is - there can only be ONE Alek Wek/bald high fashion model. She's in a no-win situation. Yeah, I wouldn't be surprised if Iman has similar problems. :(

Aminah,
Vlad is probably hanging with his wife --> i seriously don't understand that trio and how they've all been photographed together at events.

I bet that if even with top-notch stylists, this can still happen, especially considering how frequently she has to get her hair done - and how many years she's been in the game.

Anonymous,
Thanks for sharing your experience. Thinning hair/hair falling out are all too common in our community - but we're made fun of when it happens. I've seen people make fun of folks who had bald patches - not knowing the person had those because of cancer.

Anyway, I was happy to see Janet's short hair. Isn't it weird how unusual it is to see a black star with her own hair? I wish that was more the norm instead of the exception.
8:06 AM, July 01, 2010

Sundry said…
Nice write up, L.A. I hadn't seen this.

Chris Rock's documentary _Good Hair_ shows a lot of the pressure that's on. I recommended it to one of my coworkers after she told me about a remarkably stupid comment she made to a woman in the next high end beauty shop chair regarding the woman's natural hair vs. a weave. She came back to work and told me how embarrassed she is, and wishes she'd kept her mouth shut.

Anonymous said…
Like so many other women who live by weave, I believe Naomi's problem is "permanent" and due to overabuse of her scalp which causes tissue damage underneath. Many women will have a head full of hair but get on the weave fad nonetheless. It's so very sad. I've done headcounts at time while out and about or on public transportation and it seems the majority of us now believe weave is what makes up beautiful when it looks so unsuitable and fake the vast majority of times. It's also sad to watch the change in personality that overcomes women in between appointments. You see young girls under the age of 10 with hairloss. What happens to a young child who comes up from the cradle wearing weave. I saw babies in France wearing extensions...this mess is global and has dire consequences for the self-esteem of those so devoted to it.
8:27 AM, July 02, 2010

Liz Dwyer said…
Sundry,
I still haven't seen Good Hair...what did your coworker think about it? Did she check it out?

Anon,
Yep, I know plenty of folks who wear weaves because they say it's "easier". That's short term thinking to me. What's easy about alopecia in the long run? The little girls I see with them hurt my heart. People put tons of fake hair up in their girl's heads and I remember when I taught school I'd see girls with those awful bumps where their hair had been pulled too tight. It's just wrong.
8:28 AM, July 07, 2010