I'm Sure Jean Michel Cousteau Would Like To Smack Joe Barton 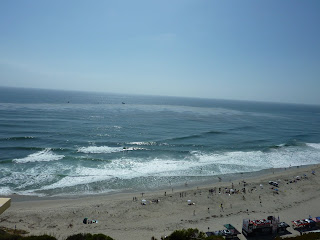 Yesterday I spent the day down at the Ritz Carlton in Laguna Niguel with Jean-Michel Cousteau. Cousteau's Ocean Futures Society is partnering with the hotel chain to start an Ambassadors of the Environment program that'll give people the opportunity to engage with environmentalists and go on excursions with trained naturalists. You don't even have to be staying at the hotel to do it. Open to the public. And it is AWESOME!
That's the view of the ocean from the hotel balcony. I kept thinking what it would be like to see oil floating on that water. Seeing this gorgeous beach, this water packed with surfers, made me think of another part of the world where oil from the BP spill is destroying the ocean and beaches -and I don't care what any optimistic folks say, it probably won't be the same for generations.
This morning, Cousteau's passionate talk about the ocean and how it's the, "life blood of the earth" was still in my mind. As I got my kids dressed, I watched the congressional hearings with BP CEO Tony Hayward. My jaw hit the floor over Texas Rep. Joe Barton apologizing to BP for the "political shakedown" the White House supposedly did in getting that $20 billion. AND, he said he's "ashamed" of the White House for doing so.
REALLY? $20 billion is a drop in the bucket. It doesn't even come CLOSE to covering all the costs of this and HOW DARE this man say that! I wanted to slap him. Cousteau is an amazingly nice man, but I'm sure if he could, he'd slap that guy too. I don't care what political party you are in... there is a such thing as standing in solidarity as a country against a common enemy. Yes, the enemy is a greedy, polluting oil company!
I hope Texans vote him out of office. I wish I could move to Texas just to vote against him!
Email Post
Labels: BP environment Jean Michel Cousteau Joe Barton Ocean Ocean Futures Society Ritz Carlton texas Tony Hayward

D- said…
Bout time you came back!!
And yes unfortunately the oil spill is going to cause terrible damage and not just to that region, I don't think.
1:46 PM, June 17, 2010

sundry said…
Thanks for this. Good thinking. I am so horrified I'm about immobilized by what's going on with this oil spill. Thanks for your perspective.
9:44 PM, June 17, 2010

nick said…
The Republicans are determined to give Obama a beating at every opportunity. How could it not be sensible to put aside (some of) the costs of compensation?

What astonished me was Tony Hayward's inability to answer any technical questions put to him by the House Committee. He kept saying they would be answered later. This guy is Chief Exec but he can't even be bothered to get up to speed on the technical issues.
1:21 AM, June 18, 2010

Liz Dwyer said…
D,
The damage is going to be worldwide eventually. Those oil dispersant chems being pumped into the water... who knows what those will do.

Yeah... I needed a little break. A little blog vacation. ;)

Sundry,
I've felt a little immobilized, too. It's heartbreaking to see how people put profit before planet and other people.

Nick,
I don't think Hayward can be THAT dumb and inept. I think it's just an act for public relations. I bet BP will give him a bonus to take the fall when they're all culpable.
8:40 AM, June 18, 2010