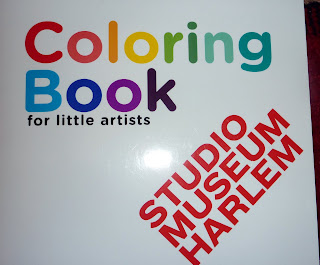 One of the most inspiring stops during my whirlwind trip to New York City was the Studio Museum in Harlem. Located on bustling 125th Street, the museum features an amazing array of work by a diverse spectrum of African American artists.
A $7 donation gives you the chance to absorb pieces by Romare Bearden and photographer James Van Der Zee. However, I really loved seeing Elizabeth Catlett-Mora's 1954 linocut on paper piece titled "Separation" and Ellen Gallager's 2004-05 series of 60 etchings called "DeLuxe", a thought-provoking commentary on standards of beauty, particularly the pursuit of light skin and long hair. 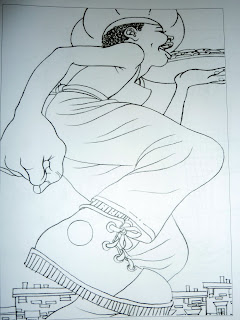 Of course, before leaving the museum, I headed over to the museum store to pick up some gifts for my sons. I decided to buy the museum's Coloring Book For Little Artists. Retailing for $7, the coloring book features about a dozen images created exclusively for the museum, like this 2006 drawing by Kadir Nelson titled "Cookieman".
When my six year-old saw this image of a little boy eating a gigantic cookie, he immediately said, "I wanna eat that cookie!" and then, as he examined the picture more closely, he squealed, "Does he have an afro??? COOL!"
It got me thinking, not for the first time, how my boys love to color but it's rare that they have the opportunity to color images of people of African descent - or for that matter, Asian or Latino folks. I've always bemoaned the lack of people of color in fashion magazines, but today's coloring books are less diverse than an issue of Vogue. 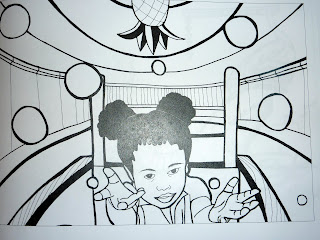 My boys love superhero coloring books, but chances are slim that the images contained in one will be males of color - after all, most superheroes are white males (or white male mutants). Not that there isn't diversity in the superhero universe, but it's difficult to find it and not every superhero gets the attention that Superman, Batman and Iron Man do.
My two son's self-esteem isn't reliant on their being able to color images that look like them, but it means something for them to be able to do so. It would actually be a good thing for children of all backgrounds to be able to color diverse images. I just wish it was easier for parents to purchase coloring books -and really all media- with diverse images of adults, children, superheroes or cartoon characters.
In the meantime, I'll be photocopying the pages from the Coloring Book for Little Artists. At $7 a pop, this coloring book isn't cheap, and I want my sons coloring those pictures over and over.
Email Post
Labels: african american art Asian children diversity Harlem images Latino light skin long hair media New York City self-esteem Studio Museum in Harlem super heroes

Tafari said…
Fortunately, I live bear Detroit where I can visit and take my kids to African centered museums & book stores etc.

It does do a lot for our children to see themselves references in everyday things such as coloring book. It totally helps to promote self value.

In my home Black literature and dolls are a must. My wife thinks I go overboard a bit but my Black daughters need to see that they have stories, and people that look like them.

kidsistah said…
This is a wonderful post! I wondered about not having Black images to color even when I was a child--not too many Black coloring books were available in the 80s. So I have coloring books full of little mermaids and Barbies of all hues.
Eventually I started drawing my own pictures.
5:41 PM, April 16, 2010

nick said…
It's absurd that colouring books and things used by kids are still so white-centred in 2010. It must affect self-esteem to some extent if you keep seeing people who don't reflect your own appearance. Surprising as it may seem, when I was a kid my sister had several dark-skinned dolls which she and I often played with and thought nothing of it.
1:43 AM, April 17, 2010

Liz Dwyer said…
Tafari,
It is easier when you live somewhere you can access diverse, positive stuff more easily. With boys and superheroes, sometimes it feels like the closest I can get to finding a black one is Batman and his black outfit!

Did you get your Black is Beautiful tee yet?

Kidsistah,
There weren't many black coloring books back then and there still aren't now - but I'm like you, I remember coloring Snow White all different skin colors. My husband draws his own action figures and draws them for my son - so that's the only access to black superheroes my kid has.

Jane,
Oh good, so glad you did! I should probably just buy another one instead of photocopying... but you know how kids are, they LOVE to color the same page over and over.
11:38 AM, April 19, 2010