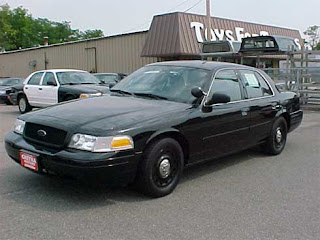 I have a few letters I'd like to send:

I know some of you think it’s cool to buy a used police car at auction and then ride around in it like you’re totally badass, but really, how wack are you? You’re driving around in a banged-up reject police car!

Don’t you know you only get cool points if there’s lights, sirens and a uniform (that you look hot in) attached to the car? And as if you’d ever get any girl to, ahem, ride in the backseat. Heaven only knows what kind of crackheads have barfed back there. Epic. Fail.

- to the plebian masses – of which I am clearly a proud, card carrying member. FYI, it's possible to share cool links AND socialize. Do us all a favor. Lighten up and drop the annoyingly self-important tweets because they're freaking boring.

I know years of weaves and chemicals have reduced your hairline to a shadow (if that) of it's former self. However, what in the Smokey Robinson have you been puffing on to think that any of us want to wear your wig line? 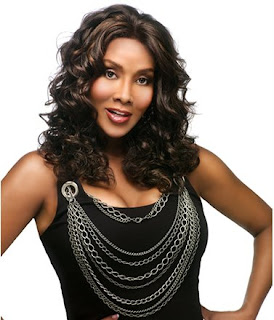 Seriously, Vivica? You know that wig looks a hot mess! I won't even get into how when I first saw the picture I said, "Dang, RuPaul is lookin' kinda good these days!"

And if you like Vivica's wigs, I'm praying for you. "Lord, hear my prayer. Heal this delusional child from the confusion which has gripped her brain!

Dear Tiger Woods,
Kudos to you for mostly staying out of the news for the past couple of days.

Sigh. If only I had email or snail mail addresses... but I don't. Thank goodness I at least live in a land where I have the freedom to type out fake letters on my blog.

Tafari said…
Im so happy that I was not on your hit list! You covered so much ground you know that Aunt Viv's wig shout out has me going!!!!

From the promo photos I'm wondering why she look lighter & whiter in some of the shots. Is it me?'

White wash considered, I remember when she was a brown sexy sister before she got all that surgery & that white woman's nose.

nyc/caribbean ragazza said…
Why did Vivica get all that surgery?

nick said…
At least most female wigs look fairly convincing. Male wigs are usually a serious embarrassment, though I haven't noticed that many recently so maybe they're improving - or the guys affected are happy to be stylishly bald.
1:32 AM, April 21, 2010

Unknown said…
Thank you for making me laugh this morning!!!! I needed it. Have a great rest of the week.

Oh, and I totally agree with you on retired police cars. Quite possibly the most pathetic ride out there.
9:40 AM, April 21, 2010

Liz Dwyer said…
Tafari,
They Photoshopped her into something that doesn't even look human! She does look lighter in some shots. Weird... but she has been in Hollywood for a long time. It's bound to wear off on a sista. Yeah, I'd rock that blonde one with some bright red lipstick and lucite heels... ;)

NYC/CR,
She sure doesn't look like herself. I blame 50 Cent. After they hooked up, she has never been the same.

Nick,
I know a lot of guys who just shave their heads completely after they start losing their hair... and then there's Nic Cage. His hair pieces never seem to look quite right.

Disneyland Mom,
Glad to make you laugh! Yep, those discarded police cars are TOTALLY pathetic. I see at least two every day though.
10:58 AM, April 21, 2010

Liz Dwyer said…
Averagebetty,
I agree about the used postal truck! I've wanted one of those forever. Somebody had one in my old Chicago neighborhood and tricked it out spectacularly!
11:34 AM, April 21, 2010

Jameil said…
those cars are big in the south, too!! not sexy. vivica looks so plastic there. geez! i think you meant to say "the confusion which has gripped HIS OR her brain" LOLOLOL. You're welcome. I'll be your editor. the deep tweets are so annoying. i will unfollow like a mug!!
4:21 PM, April 21, 2010

Liz Dwyer said…
1969,
Somebody somewhere done told her a lie because she thinks she's workin' it!

Jameil,
Look at my public school English showing! ;) Yeah, I can't handle too many deep and intellectual tweets. I like to read about intelligent things just like the next person but c'mon, folks need to lighten up!