I've had some henna brewing in my kitchen for the past 24 hours... and of course I just HAD to decide to put it in my hair at 11 pm. That means I can't go to sleep for the next couple of hours... meaning I have no reason not to give you a bit of the random things I'm thinking about and cool things I've done over the past week. 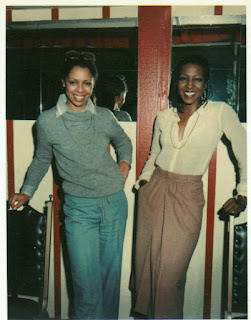 1) Role Models That Look Like Models: I grew up with some super stylish and smart female role models. My Aunt Sharon (on the right) and our family friend Marsha Reeves-Jews are both on Facebook, and last night Auntie posted a photo of the two of them from sometime in the early 1980s... and my laptop screen burst into flames from the hawtness! They are KILLING it with the flyness. These ladies are why I wanted to buy everything out of the Spiegel catalog when I was little.

2) Spring Break: My sons have been on spring break all week - and they've been partying hard! Average bedtime? 1:00 in the morning. And please, someone tell me, why do boys find wrestling on the floor for hours so much fun?

3) Census: Just because April 1st passed, that doesn't mean it's too late to turn in your census form. You can mail them in all month. I don't "get" people who don't want to do the census. Don't agree with the government, fine. But at least be counted, and at least recognize that a census isn't just about you. Your being counted helps you AND other people.

4) What Box Did Obama Check: President Obama checked that he's black on the form. Have we ever wondered what any other president was gonna check? Why is this news? Why are some people mad that he didn't check both the black and white boxes? Yes, I'm putting this on my Master List of Things to Write About When I Get a Clone. Maybe my clone will appear on Monday. We'll see.

5) Jesse James: He's our new poster boy for the age old truth that you never really know what's going on in people's lives, especially in Hollywood. This town has been manufacturing personas for a century. I don't expect that to stop anytime soon.

6) Running withdrawal: Speaking of addiction, I'm still in self-imposed knee rehab. I know my knee needs rest but it's very difficult to discipline myself to not run. That runner's high is a real thing. I'm experiencing withdrawal.

7) I Enjoy Volunteering: Last Friday I volunteered to help build a playground in the City of Inglewood. It was sponsored by KaBoom and Koolaid - if you want to participate in a build, click on that link and then you can come out and mix concrete and shovel mulch so kids in all neighborhoods can have a safe and fun place to play. 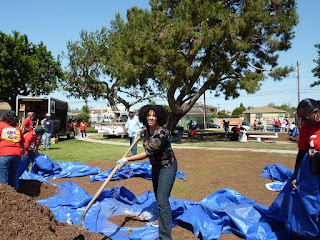 8) The Simmons Family: Yes, THAT Simmons family. Reverend Run and his family came out for the playground build. They're just as down to earth in real life as they seem in on TV. Plus I got to see Rev. Run DJ some RUN-DMC. Majorly cool. 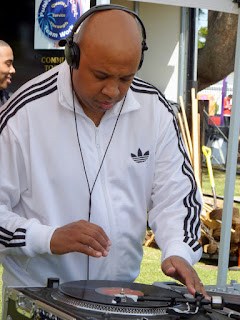 9) Chicago is Going Crazy: It warmed up in Chicago, so you know what happened, in 50 hours, 41 people got shot. People were even shooting while the police were around... so please don't ask me when I'm moving back home, mmkay?

12) Why I Love My Job: Not everyone gets up in the morning thinking about how much they love their job. I do. Getting to tell the stories of everyday people who had an idea to make a difference in their community and decided to put it into action... well, what could be better? Read this story of Texas' Aminah Moore. She's getting a $5,000 grant to start a girls club at the elementary school she works at.

13) Fiction: I started writing fiction again after having a serious crisis . When my laptop died back in January, I lost almost everything I've written over the past two years. It was all backed up on my external hard drive - but somehow, well, my writing folder on that drive was completely empty when I went to retrieve everything. No idea why or how - but I felt like someone had just died. I cried for two days. Now I'm back to writing. Let's see what new and good stuff comes of it.

14) Depeche Mode Song of the Week: "Lie To Me". I've listened to this one more than any other song this week. It's just fit my mood. Maybe someone should send this one to Sandra Bullock.


15) Why Henna? Because I don't like using chemicals of any kind on my hair, but I also don't particularly like grey hair on me. And on that note, I'm going to go rinse!
Email Post
Labels: Barack Obama Chicago Depeche Mode Family Hair henna Jennifer Hudson jobs murder Running spring texas volunteering Weight weight watchers

D- said…
- That picture is beautiful, your aunt and friend are beautiful!!

- I am obsessed with making backups of what I write, so i usually send them to myself by email, and save onto my PC, laptop, USB, have paper copies etc. Still didn't prevent me from losing the last 6 chapters of my book once. Like you said, you gotta forge on but I really felt like crying.
6:19 AM, April 04, 2010

Frufrugal said…
Loving your song of the week!

Call Family said…
How lucky you were to have those Aunts as role models. Made me think of my "fly" elementary school principal who had a similar impact on me...and I totally used to drool over the Spiegel catalog too (pre-virtual cyber shopping)!
I've got to get the deets on that Henna treatment from you.
I just finished voting for a playground-in-need via the KABOOM site, and it is a worthy project to get involved in. We just got a new playground as a result of the PTA fundraisers at my school, and it was installed by experts over a weekend (with minimal community help). I think people don't realize the inequities that exist between schools as a result of PTA efforts.
9:16 AM, April 04, 2010

That's terrible about all the lost writing. Weird about the external hard drive failing as well. Maybe the next thing you write will be way way better than what you lost. And then you better quadruple back it up!
12:50 AM, April 05, 2010

Liz Dwyer said…
D,
Ah, you know that awful, sick feeling. I hope I never have to have a repeat of it.

Fru,
They sure were styling! I think my aunt said they were at a club... club outfits sure are different these days, aren't they?

Call Fam,
Oh gosh, I used to want to buy EVERYTHING out of the Spiegel catalog. Didn't you use henna back in the day? I mixed mine with indigo to try to make it take to the grey hair more. Not sure it worked.
You are SO right about the inequalities due to PTA/parent associations. Some of these schools around here with monster PTAs get a whole lot more.

IANSJ,
I'm glad we're OK, too. Yes, we do, but there's still some more things we have to do around here to prepare.

Nick,
They are both still so lovely. :)

I was shocked that everything was gone from my external drive, especially since I'd JUST backed everything up to it the day before my laptop died. Everything else I backed up is there - pictures, music, etc., but not the writing. If I didn't know better, I'd think someone purposely deleted it all.
8:21 AM, April 05, 2010

1969 said…
Your aunt and her friend are indeed the HAUTE-ness. Love it.