Why Can't My Sister Live Here? 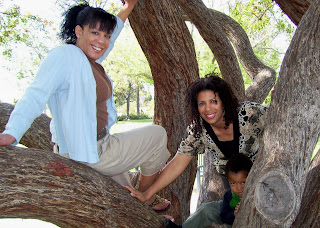 My sister and I have been having more fun than should be legally allowed. As you can see, we've been out and about, spending tons of time climbing and hugging trees. Isn't she a hot tree-hugger? And despite my worries about her type A, neat freak tendencies, she's doing very well and is only threatening to reorganize the bookcases!

My solution has been to keep her out of the house pretty much all day. Since we've been running around though, I haven't been home to come over and read your blogs or write something new on mine. As much as I miss y'all, that's the way it should be. I don't get to see her too often so it's well worth it to step away from Blog Land for a hot second and have a great time with her.

We first had a grand scheme to go to Santa Barbara over the weekend but instead decided to stay local. My sister had never been over to Venice Beach so on Saturday we headed out that way and strolled the insanity that is the Boardwalk. There were the usual sage and incense sellers, drummers, henna tattoo artists and folks hawking wind chimes made out of colanders and forks. We also dodged waves and frolicked a bit in the sand. Unfortunately though, we ran into some tar that had washed up onto the beach (the surfers said it's oil from ships). I couldn't see it because it was under the sand, so I stepped all in it.

Before I knew it, the bottoms of my feet were covered with tar and it wasn't coming off! The surfers told me they frequently have the problem of getting tar on their boards. They told me to just rub cooking oil on the tar and then it would gradually wipe off. Thankfully, we soon wandered over to the Sidewalk Cafe for a late lunch. The waiter was really nice when I asked him for a cup of cooking oil so I could get the tar off my feet. It took me 20 minutes in the bathroom but thank goodness it worked! But I feel horrible thinking about all the animals that probably get some of that tar on their fins or fur and have no one to rub cooking oil on them to remove it. 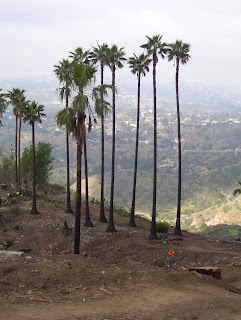 What else? We go work out hardcore every morning. My sister is used to running five or six miles a day so I've been going to limp along run with her. Thankfully she gave me a bit of a break today and we only hiked four miles on Mount Hollywood.

The last time my sister was here was pre Griffith Park fire. Parts of the trail are starting to regrow, but this section still only has scorched palm trees. It's amazing that these palm trees survived and are still green on the tops despite the charred bottoms. Whew, the power of nature, you know?

Anyway, she leaves Saturday morning so I only have a couple more days with her. Sob! Trust me, I will continue to both somehow survive her tough workouts and run her all over the city. I love my sister so much. She's really a lot of fun and such a sweet and generous woman.

Gosh I wish she lived here in California. She needs to make it happen! But in the meantime, we've got another full day lined up for tomorrow.
Email Post
Labels: Beaches Family Griffith Park Los Angeles relationships

Anonymous said…
Liz, I love it that you have such a great relationship with your sister. When some siblings have such poor or even hostile relationships, such a positive friendship is something to relish and maintain. Long may it last!
3:17 AM, April 09, 2008

Miriam said…
How for for you guys! And fun to read about. Thanks.

Anonymous said…
Hurray for sisters! I'm delighted you are having a nice time. I've had both with my sisters - sometimes good, sometimes not so. I think few relationships are as complicated as sisters.

Haute in LA said…
A tear! I'm going to cry. Why? because I want to know why MY sister can't live here too! I'm glad you all are having such a great time. I'm so excited though because guess what??? My soo-soo (that's our nickname for each other, don't ask) is coming in two weeks!!!!!!! Enjoy your time with her and don't worry about those of us who wait to read your blog with baited breathe. We'll survive!
9:10 AM, April 09, 2008

Lisa Johnson said…
Awww this is the sweetest post! And that picture is wonderful. With pictures like this, they mean so much as the years go by. I'm glad you have it. Have fun with your sister and report back when you can! ; )
10:03 AM, April 09, 2008

the last noel said…
You know, I love the political and social stuff on your blog, but I enjoy the personal family things as well. Who knew you had a neat-freak sister!
10:15 PM, April 09, 2008

Lisa Blah Blah said…
Aww, we miss you, but I'm glad you're having such a great time! I desperately wish I could get some one-on-one time with my sissy. With kids and life it never happens...but at least she lives less than an hour away. Enjoy the rest of your visit with your sister!
2:30 PM, April 10, 2008

Tafari said…
Have fun but I miss ya boo!

heartinsanfrancisco said…
You both look so beautiful and happy! I would have loved to have a sister who became my best friend when we grew up.

So glad you guys are having such a great visit.

Anonymous said…
I'm so glad that you enjoyed your visit with your sister, Liz. I love to see siblings who love and enjoy each others company.

Andromeda Jazmon said…
Glad you are having so much fun with your sister. I invited you to a blogger picnic over at 7 Imp today. Bring her along!
8:09 AM, April 14, 2008

Liz Dwyer said…
Everybody,
Forgive me for replying en-masse to you comments but I would've said about the same thing over and over again, which is essentially, thanks for all your good wishes about her visit. We did have such an amazing time together. It went too quickly though. We went hiking a couple of times and I kept thinking about how one day I'll be sitting at her funeral or she'll be at mine and one of us would be re-living the memories of the week we had together while the other would be smiling down from Heaven (we hope!)

It also makes me think about how I really want to keep encouraging my sons to be each other's best friends. I always tell my boys that if you can't love your brother, how can you love someone else and forgive someone else? I have to practice the same thing.

So yeah, thanks for all your good wishes and I hope you all each connect with your peeps and tell them how much you love them. I could do it more often than I do too.
8:03 PM, April 15, 2008