Until today I hadn't really paid attention to the whole Texas FLDS polygamy ranch scandal. The minute I hear the word "polygamy", I tend to think of some controlling men who have brainwashed some poor women so that they can have lots of sex and get waited on hand and foot.

Watching some of the wives from the ranch on the Today Show this morning did nothing to change my assumption. My goodness, these ladies need some serious deprogramming, not to mention a few hours alone with Tim Gunn.

"Do you hear the craziness you're saying? Is your hair for real? Why are you dressed like you're on Little House on the Prairie? Do you know you sound like a robot?"

Even if they want to claim that no abuse happened with their kids, wowzer, they seriously need help in the mental department! 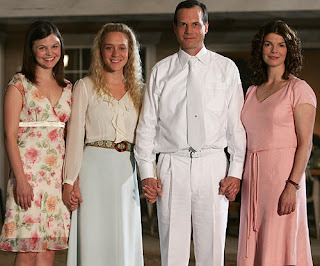 Even on that TV show, Big Love, it was all white ladies as the wives. And instead of the husband looking like the Grizzly Adams we urban elite snobs clearly think they look like, Bill Paxton gets thrown in there as the husband.

Is America just not ready to see some black guy from the 'Sip being stressed by having to manage his relationships with his four wives? Don't we want to see the Chinese guy from the outskirts of San Francisco getting his freak on with Wife #1 on Monday, Wife #2 on Wednesday and Wife #3 on the weekends?

I know some comedian somewhere has probably told a joke at some point about how no real sistah is gonna tolerate being Wife Number Two, let alone being Wife Number Twenty. But at the fine university I went to, there were black women who lived on the south end of campus and tolerated their boyfriends having another girl on the north end of campus. True, the two ladies may have eventually had an ugly altercation in the Tech building over this situation, and said altercation may have ultimately been blamed on one of them being ghetto since she was from Gary, but you get where I'm going with this, right? And in the many years since college, how many times have I heard someone say, "He may creep with her but he comes home to me at night."

So why don't black folks, Asians and Latinos just full on go for the polygamist route? Not saying it should go down like that, because I don't, but why don't we have a little more diversity in our polygamists?
Email Post
Labels: Black people college diversity I know you think I'm crazy after reading this In the News memories Sex Tim Gunn Today Show

1969 said…
This entire issue fascinates me. I don't know....I might like to be the fourth wife. Other women to clean the house, do the cooking, laundry, sleep with the hubby while I was out getting a pedicure and shopping. Hmmmmm, a girl could get used to sharing.

thailandchani said…
Oh, 1969! I think you'd have to be the first wife for that to happen! LOL

Seriously though, there seems to be a proclivity in some of the religions (mostly all white - and subtly if not overtly racist) who go for this kind of thing.

It's an entirely different concept from mia noy which is a Thai custom that has a very specific purpose.

none said…
Polygamy has been going on in various cultures on and off throughout the histopry of mankind.

I figure if they are happy with themselves and their lifestyle then more power to them.

The last article I read about polygamists interviewed the women who said they had a lot of power and a strong support stucture with their co-wives in that type of relationship.

Since the abuse call has turned out to be a hoax I think they should give the kids back and leave those folks alone.
8:37 PM, April 16, 2008

Fly on the Wall said…
If I'm not mistaken, Osama bin Laden has four wives. Polygamy is prevalent in parts of the Muslim world. Also, a fire last year in a New York City apartment block revealed to authorities that African immigrants were living in polygamous relationships.
9:10 PM, April 16, 2008

See, I figure if a guy is rich enough to have four wives, he's rich enough to hire a housekeeper and an assistant to help out with all those tasky sorts of things. Except for the sex. That'll be my sole tasky thing. ;)

Chani,
Definitely seems to be some sort of racist subtext in all these "we live in a compound" type of groups here in the States. And don't they sound totally brainwashed? Can't even answer a question straightforwardly.

Hammer,
Definitely has gone on in lots of cultures over the years. Gosh, anybody who's read a romance novel has probably experienced a "harem plot" at some point or another. LOL! But seriously though, back in the day men took more wives because women needed a warrior to protect you and there weren't enough men around because they got killed off in the endless wars. Nowadays? Not so much. So, the abuse call is a hoax? Hmm...

Fly on the Wall,
Yes, in other parts of the world, but how come in general, we don't see more of it here in the States? And I'm sure Osama's wives are psyched that his terrorist behind has been in a cave for years. I hope that means they haven't had to put up with him.
10:50 PM, April 16, 2008

nyc/caribbean ragazza said…
I'm not sure why we don't see more diversity in the States among the polygamist groups. Maybe because most of them do have some kind of us against them racial thing going on.

The majority of the women in these relationships outside the U.S. are not feeling it. They are not empowered. How can they when they have no say over who becomes a new wife?
11:02 PM, April 16, 2008

Anonymous said…
I'd like to think black women have more sense than to get involved in such arrangements! Even if the women maintain they're perfectly happy, I find it hard to believe they don't mind sharing like that, and that the man doesn't exploit them in all sorts of ways by playing them off against each other.
3:53 AM, April 17, 2008

Anonymous said…
I know a few people who are part of or have been a part of polygamous relationships. (this is not full disclosure here, but it's too deep for a comment)

Toni Campbell said…
I have known a couple of Black people in polygamous relationships that were based on either their religion (Hebrew Israelites) or culture (Rastafarian). I am aware of others who practice it as part of an "African-centered" lifestyle. Maybe we don't hear about it because, since it is illegal and Black people already have a shaky relationship with the law, they make sure not to draw extra attention to themselves.
2:32 PM, April 17, 2008

Jameil said…
black guy from the 'Sip is not going to be allowed to LIVE with all of his wives. i think that's the key. there are def. polygamists across the spectrum but if they know about sharing a man, they're not going to do it in the same house. i mean COME ON!!! but maybe that's my naivete b/c it's outrageous to me for ANY woman to accept that.

i def. thought the abuse call was a hoax from the jump. the cops admitted they were looking for a reason to get in there b/c they thought there might be abuse. that doesn't mean there isn't any. i just don't necessarily believe a real phone call preceded the raid.
5:54 PM, April 17, 2008

Tafari said…
Those women look hideous but then again, those men are hit too. Let them fuck each other & inbreed, who really cares???

Can you say Stepford!!!

Wait, wait, wait, were you getting personal? Were you someone's extra boo on campus???

Liz Dwyer said…
NYC/CR,
I agree with you. If I get to vote on who gets to be the 2nd wife, can I pick "none of the above"? Or am I going to get smacked for voicing my real opinion? I don't envy that lack of choice.

Phillipe,
Aww, come on...tell us what you're really thinking about all this! (I sorta can't believe I wrote this post, actually!!!)

Nick,
I don't think most women are hardwired to believe that polygamy is a good thing for them. But I guess you can be socialized to go for it.

Jali,
So it's sort of like White Missing Woman syndrome, huh? I guess we don't get to hear about other folks experiences with polygamy because the news media doesn't spotlight it.

Toni,.
I totally didn't know Rastafarians or Hebrew Israelites did polygamy. It totally makes sense that folks would be more discreet. That's one less thing folks need the cops banging on their door over.

Jameil,
I'm always saying to myself, "How exactly does the set-up work?" I mean, yeah, we've got Hugh Hefner and those three "girlfriends" or whatever he wants to call them, but I seriously don't get it! I wonder if they'll sue the cops over this situation. I wouldn't be surprised if they do!

Bygbaby,
Aren't they totally on another planet??? It's like, um, are you SERIOUS? And NOOOO, I was never the extra boo! Never ever! That was just drama I witnessed and it was crazy! I swear, I should write a book about the black community's drama at Northwestern. It was ridiculousness.
2:03 PM, April 18, 2008

the joy said…
So... I was thinking about this same thing, but for different reasons. I was considering my Halloween costume (early, I know) and whether I should go as an flds woman with lingere under a horribly ugly floor length dress (my costumes are usually socially as well as sexually provocative). But I wondered if itd be believable since I'm a Negro. But maybe that'd add another level of provocativity... Anywho, I'd whoop a b**** for trying to be #2. On sight.
10:22 PM, April 20, 2008

Liz Dwyer said…
The Joy,
I'm already thinking about Halloween too! LOL, that would be a hilarious costume, but yeah, because you're not white it's questionable whether folks would "get it".
2:22 PM, April 21, 2008