Earlier today I wanted to go throw myself into a sensory deprivation tank because my brain was feeling a little like this: 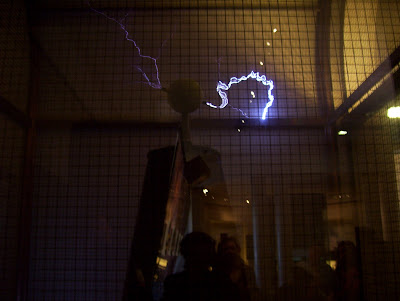 Yes, I totally felt like a mental Tesla Coil! I was having one of those moments where I was comparing my life to everyone else's more amazing and awesome life. The comparison game left me feeling agitated because I don't own a house, my car is 11 years old, and I have no cute spring clothes... and those are just the first three things I was getting worked up about.

Sound trivial to you? Well, maybe it is. But I know I'm not the only one who goes through this. I guess I was just having a moment where I felt less than, where I felt like I should be achieving something that I'm not, and in our world, achievement = material things.

I felt like I needed to distract myself from such thoughts so I made the mistake of turning on MSNBC to see what was happening in the world. Why didn't my guardian angel stop me from doing this? Talk about a BIG mistake! I got to hear all the gossipy insanity that is the spin-cycle of our Presidential election process.

Seriously, what in the world is going on with this mess? I'm seeing $6.99 watermelons in the grocery store, there's more homelessness here in LA than anywhere else in the United States and California unemployment hit 6.2% in March, but, nope, I'm supposed to focus on who Barack Obama's ever talked to in his entire life?

Yeah, the TV absolutely had to go off when I was started saying, "Bitch, please," to Joe Scarborough's commentary. AAGH!!! I think sparks were flying out of my ears!

So what made me stop my "Tesla Coiling"?

Well, I looked over to where my four year-old son was lounging, flat on his back in the middle of my living room floor. He was wearing a Spiderman costume with a pair of cowboy boots and he was staring straight up at the ceiling.

He seemed very deep in thought so I asked, "What are you thinking about over there?"

His reply? "I'm thinking about how much I love you." He then sat up and threw his arms around me.

I suddenly stopped feeling like I needed to go to the bookstore and buy some book titled "How to Fix Your Lame-o-Life".

My life is not so lame, even if I have my dinged up car, no new clothes, and no house in the overpriced Los Angeles housing market. Not lame because I have a little boy who loves me and isn't shy about telling me so. Not everyone has that and I'm so lucky.

I hope you have someone who tells you "I love you" and saves you from yourself too.
Email Post
Labels: Griffith Park kids life Observations Stressed Out

Anonymous said…
It's always fatal to think too much about how our lives compare with others'. Inevitably it seems like they're doing better in some way or other. It's good when an innocent remark like that reminds us of the really important things in life. And what a wonderful thing for him to say!
5:40 AM, April 19, 2008

Jessalyn said…
Isn't that the truth! I've had many a similar day before. I'm glad your little boy helped give you the perspective you needed.
6:45 AM, April 19, 2008

Anonymous said…
Oh boy... I can really go on the "their existence is better than mine gig." Doesn't really matter the context - they are younger, older, richer, thinner, etc. I can really drive myself crazy with that. AND I think our competitive capitalistic society WANTS me to feel that way.

What helps me is to simply say a little blessing to the one I envy.

thailandchani said…
Tesla Coil. I like that description. I know what you mean about envy. We all fall into that trap now and then, even though it may manifest differently for all of us. I have a specific area where I will weigh, measure and compare if I allow it. It's a persistent battle at times. :)

Still, as me olde gramma used to say, we never know what someone else's life is *really* like.

Ian Lidster said…
I followed you through your trip, Liz and I found I empathized with so much of it. But, like you, I do have somebody to say she loves me. And when I think of some others and their misfortune, I ain't doing so badly. Likewise you.

Jen said…
Oh, kids *are* the joy in life, aren't they? UGH, I got one of those anonymous posts on my blog detailing every single person that Obama *might* have been in the same room with in his entire life. It was anonymous and I removed it, but... UGH. UGH. UGH. Did I mention, UGH??

Liz, always remember, if you give into the things=success thing you're missing that little boy. I'm in a long process of divesting myself of "things" right now, not to be all 60s, but just because I'm sick of all of our consumerism and realized that library books, simple foods, hanging out with friends and family, being able to write - that's what matters to me right now.

Anonymous said…
I have those days every other day. Luckily, when I look at and talk to my boy I tend to come to the same conclusion. He is the balance in my universe. He is the sanity in crazy times... for the most part. The other day he said he was voting for John McCain. I still love him though.
9:59 PM, April 19, 2008

nyc/caribbean ragazza said…
Oh boy I had plenty of those days in L.A. and I didn't have family near by. It would send me into such a funk.

I have to say I haven't had a single comparison moment since I moved. I think it's because here you are not define by what you do.

Your life is not lame at all. Your life is full of the things that really count. like love, family, friends, health, talent, intelligence and kindness.
10:34 PM, April 19, 2008

Liz Dwyer said…
Nick,
My mouth was really hanging open after he said that. I fully expected him to wax poetic about Boba Fett and Obi Wan Kenobi! It is so useless to dwell too much on these things, so why is it so easy to do so? It's those moments that I feel really "weak" as a person.

Jessalyn,
I'm glad he helped me too

Houseonahill,
Thank you for that! I can feel it! ;)

Claudia,
Thanks for the hug! I was just talking to my sister about how just picking up the average magazine can send us off along the road of comparison. It's all geared to making us want to be something or someone else -- and we'll buy the stuff or services to make that happen. I agree that it fits in with the capitalism. We're taught to be fearful of not spending constantly.

Jameil,
And then an hour later he's all, "Fine then! You're not the boss of me!" because I told him he couldn't do something. ;0 I'm shipping him off to his Auntie the next time he says it!

Chani,
I seriously can't take the whole politics thing anymore. There's so many fake distractions, character assassination and such a lack of reality in the way it's going down. It makes me sick.

Anyway, I remember when I was a kid and I learned about the Seven Deadly Sins. I didn't really understand envy back then, but now I do. Your grandma was right on though. You never really know what's going on on the other side of the fence.

Oh, and I've been pretty interested in Nikolai Tesla ever since I saw that movie "The Prestige". David Bowie did an awesome job playing him -- nd then I remembered seeing the coil up at the Griffith Park Observatory. The sound of the electricity buzzing off it is actually really loud. You feel like you're in a Frankenstein movie.

Ian,
I just watched a documentary about homelessness in LA and gosh, I feel very grateful for a whole lot right now. So much misery, so much addiction -- the Serenity Prayer is very appropriate.

Jen,
How annoying that you got that post from somebody. What's that about!?! It amazes me to even think that someone might get their vote swayed by something like that. And thanks for saying all that you did. I could have more stuff but then getting would mean I probably wouldn't be seeing my kids at all and I can't go back to that. This morning I woke up and cleaned my house and just found myself thinking about all the material things I don't need and how all the advertising folks are geniuses because they make us believe we're less than without it all. Anyway, thanks for the hug! It's appreciated.

Keith,
LOL that's he voting for McCain! Very funny! My boys are a big balance in my world too. Can't imagine what it'd be like without them.

I wonder if we're more prone to these sort of days because we live in big cities. Hmm...

NYC/CR,
It's got to be a relief to take a break from the overwhelming emphasis on what you have, what you look like, what kind of cars you drive and all that other madness. I sure hope it lasts. If it does, we should all pack up and high tail it to Italy!
2:42 AM, April 20, 2008

We (already I'm lucky) have a five year old daughter who treats us to moments of love and discovery all the time.

Nothing is sweeter than that.

the last noel said…
Mmmmmmm. It's nice to have that I Love You every once and awhile. Who doesn't have that Less-Than moment? Meditation--the process of calming discursive and distructive thoughts--has helped me alot. Oh, you reminded me why it's a good idea to NOT get a TV again.
12:39 PM, April 20, 2008

Phillipe Copeland said…
Hopefully the little one my wife and I have due in October will say something like that just when I need it.
3:58 AM, April 21, 2008

Liz Dwyer said…
Donvila,
Yeah for South Bend!!! I visited your blog ages ago and loved checking it out. Did you get to go to the Obama rally at Washington High?

Noel,
It is very nice to hear those words, especially when you're sitting around feeling craptastic. I should meditate more than I do. I certainly need it! And it's TV Turnoff Week this week so I'm not watching TV all week long. I think it'll be a VERY good thing. Half the time what I see drives me crazy!

Phillipe,
Gosh, October is going to be here before you know it! Him saying that makes me feel like I'm on the right track as a parent. I think if you raise your kids right, they have that love in their hearts and feel comfortable showing it. Otherwise, that love gets clouded over with all the various dysfunctions we've learned as a society.
8:51 AM, April 21, 2008

heartinsanfrancisco said…
Lovely post. Being loved makes all the difference.

Envy is a slippery slope because there is always someone who has more or is more of whatever is being compared. I try to remind myself at such moments that I am the very best ME there is and that it's a rough job but somebody has to do it.
11:50 PM, April 21, 2008