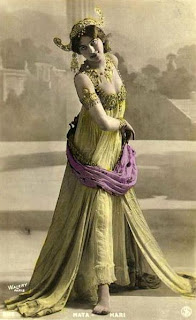 Oh, Mr. Spitzer, thanks for once more drawing us all into the scandalous mix of prostitution and politics.

Sometimes it seems like prostitution and politicians go hand in hand. Almost 100 years ago we had the courtesan Mata Hari trying to take out the French for the Germans.

Fast forward to the debacle of Marion Barry, the prostitute and a crack pipe. Then we had Bathroom Gate with Larry Craig and his toe tapping escapade.

And now we've got Kristen, the call girl from the Emperor's Club having a hand in the downfall of New York Governor, Eliot Spitzer.

I know you've read ad nauseum about how Spitzer was "Client 9" (which to me sounds sort of like it should be the name of a British electro-pop boy band). But instead, Client 9 is, governor or not, just another skeevy guy who's been catting around on his wife with a prostitute.

He looked so unrepentant as he "apologized" yesterday, the wife he wronged standing next to him looking like she'd just been hit by a semi truck. I really do feel terrible for her. I wanted to take off my earrings and grease my cheeks with Vaseline on her behalf. And she must know that since her husband's a politician, not a ball player, there's no $4 million dollar Kobe Bryant guilt ring coming her way. 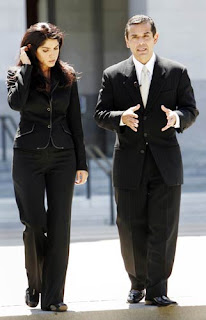 on his wife with a Telemundo reporter. His wife left him, and he subsequently broke up with the reporter. And no one in L.A. is vocally calling for his resignation. In fact, Villaraigosa's been out campaigning for Hillary Clinton.

If we skate up to the Bay Area, we have San Francisco Mayor Gavin Newsom cheating with his (now former) campaign manager's wife. I think folks up there were a little tougher on Gavin, but he's still in office.

In case you think it's a California thing, let's not forget that the King of Political Infidelity, Bill Clinton, cheated multiple times. Yes, Clinton got impeached, but he finished his term. No one said, "Step down in 48 hours or else."

I really think people are really in an extra tizzy because Spitzer's infidelity is with a hooker. We don't like the idea of anyone paying a woman $4000 for sex.

And can someone tell me what exactly you get when you pay that much money to a prostitute? That must be some gold-plated sex right there.

Actually, don't tell me. I think it's better if I don't know. I'll just content myself with wondering how many of the outraged love the film "Pretty Woman".
Email Post
Labels: cheaters Politics Sex

nyc/caribbean ragazza said…
Ha. I posted on this as well. I HATE the movie Pretty Woman. I might be the only woman in America who does. :)

Spitzer's dad was worth more than half a billion so he has bank. Clearly, he spent over $40,000 on prostitutes. That is a lot of money.

1969 said…
Hell if he wanted some freaky stuff, he should have given Mrs. Spitzer $4 grand. He would have gotten his world rocked and she probably would have done his laundry and cooked him dinner. What an idiot.
9:39 PM, March 11, 2008

Anonymous said…
I've never understood men's need for prostitutes, let alone doing it behind your wife's back. And what makes it worse here is the sheer hypocrisy of his high moral stands on other things while he's busy at the knocking shop. His wife should cut him loose right now.
3:56 AM, March 12, 2008

Anonymous said…
The reason they are asking for his resignation is prostitution is a crime! Infidelity is not. Prostitution is a misdemenor which is punishable up to one year in jail. Interestingly enough the first time a prostitue is caught it is a misdemeanor but it is cummulative crime meaning by the third time it is a felony. The same is not true for the patrons of prostitution - it's always a misdemeanor. I hope his wife gets him good, she's an Ivy school graduate and a tough prosecuting attorney. Something tells me she's not going to be singing "stand by your man."
5:54 AM, March 12, 2008

Sundry said…
I'm with cyndee here. She beat me to the punch. It's illegal (whether it should be or not is another question.)

I found this NPR story about how Spitzer moving around tens of thousands of dollars flagged a tax inquiry to be the most interesting reporting to come from this story so far. Our banks are watching us to help us fight identity theft, but in the meantime, they're getting a lot of bonus info on us. http://www.npr.org/templates/story/story.php?storyId=88116176
8:10 AM, March 12, 2008

Liz Dwyer said…
NYC/CR,
No, you're not the only one. Pretty Woman is in my top 20 most hated films list.

I was watching the Today Show and they had one of the prostitutes from the Bunny Ranch on and Matt Lauer asked her what you get for the money. The woman gave this sick smile and said, "Whatever you want." Eww... it made my skin crawl.

1969,
Total idiot. I'm sure she could've used the cash on something else and wouldn't have minded doing "whatever you want" in order to save their family all this heartache... unless he's just into some really weird stuff.

Oh wait, he's on TV right now resigning. Why in the world doe he have to have his wife stand next to him again. Maybe she wants to stand there with him. I don't think I'd be the one to do that.

Nick,
I don't get the need for prostitutes either. You ever notice how we never hear about female politicians and cheating/prostitution scandals? Why is that?

Cyndee,
Hah! Good point! Can you tell in my mind that I put it all at about the same level? LOL!

That's really unfair that for the patrons of prostitution it's always a misdemeanor. I think it should be a felony the first time! Lock 'em all up and throw away the key!

I don't think his wife will cut him loose though. She was standing next to him again when he resigned so she'll probably stick with him.

Sundry,
I think I sometimes forget that prostitution's illegal because if I pick up a copy of the LA Weekly, well, there's pages and pages of "call girls". Those ads pretty much ensure that the paper can be free.

Thanks for the NPR story. I'll check it out. Thinking about what I wrote a couple days ago about surveillance, I am not surprised that he got caught by his bank, but isn't it crazy that they can just share all sorts of info on us with 3rd parties?
9:02 AM, March 12, 2008

As for Gavin Newsom, he is now apparently considering a run for Governor. Speaking of which, you forgot to mention Schwarzenegger, who has famously cheated on his wife for years.

I've been wondering, too, what $4,000 sex is. Does she have extra breasts or something? I assume she's attractive, but so is his wife, who also is a Harvard-trained lawyer. I feel terrible for her because I doubt that she is a Hillary Clinton with no feelings. It's horrible enough to be cheated on, but to be publicly humiliated is really the capper and particularly ironic since he pretends to stand for ethics.

Liz Dwyer said…
Heart,
How could I forget about Schwarzenegger? Gosh, maybe politicians out here are drinking some sort of special water. I can't believe Newsom is considering running for governor. He can't be serious!

Ian Lidster said…
I asked the same question as you did: What could a hooker 'offer' that would be worth 4 grand? Meanwhile, his poor wife is gorgeous.
As I said on another blog, Hillary set that degrading pattern of standing by your man, regardless. I really hope that one ultimately bites her on the ass.
10:43 AM, March 12, 2008

Jameil said…
they're also in a tizzy b/c idk prostitution is ILLEGAL and he was mr. ethics extraordinaire.

The Bay Area media and Gavin Newsom are so in cahoots that it's amazing. In fact you would not have even known by reading or watching local media that there was a mayorial election going on last year.

All of the stuff that Gavin did had absolutely no impact on his re-election; and the media never even pretended to hold him accountable.

San Francisco politics is rife with collusion between the only newspaper in town, the worse local TV news in the country and Gavin Newsom.
1:37 PM, March 12, 2008

Lola Gets said…
Um, I hate to be a stickler for details (and much worse, be seen as a Barry supporter, which Imnot), but Barry wasnt caught with a prostitute, that was his long-time gf/mistress that gave him the crack to smoke in the Vista hotel. I cant see Barry spending good money on poontang when that money could be better spent on quality powder cocaine!

Whooo, man I love to hate me some Barry!

Liz Dwyer said…
Ian,
I always sort of wonder if Bill still cats around on the sly. I guess if someone wants to stay with their spouse, I guess they can, but I would not be the one.

Jameil,
$80K is ridiculous. Actually, I think $8 is ridiculous. No one should be paying for sex. I wonder if his rich daddy will cut him out of the will for embarrassing the family.

MDC,
Goodness, I thought the media was too easy on Antonio down here and that they were harder on Gavin, but if you think they were easy on Gavin as well... gosh, that's really something. The lack of independent media is a real problem when it comes to reporting the real story and that becomes more and more evident every single day.
5:14 PM, March 12, 2008

none said…
I always wondered how a woman could watch 'pretty woman' and not get offended.

Liz Dwyer said…
Hammer,
I am sitting here laughing like a fool. That is hilarious and so, SO true!

Tafari said…
how could post without mentioning Kwame Kilpatricks love for Playa's club strippers who are ultimately beat by his wife????

Pussy & power cannot go hand in hand when in office.