I have been having some CRAZY dreams the past two nights. I'm talking insane, psychedelic, trip-out, scary type dreams. And I'm pretty sure it's all because I've been taking a little something to help me fall asleep.

My sons, with their four year-old and seven year-old brilliance, see commercials on TV for drugs like Lunesta and say to each other, "That's what mommy needs."

They are especially fascinated with the Lunesta commercial because it has that butterfly that floats over all the sleepless adults and makes their eyes close. (I know some ad exec somewhere is pumping his fist in the air over this child-brainwashing triumph.)

I have to admit, I laugh when I see this commercial because when I watch it, I analyze why the people in it can't fall asleep. I say stuff to myself like, "That guy can't sleep because he's trying to figure out how to pay his house note," and, "That woman can't sleep because she knows her husband isn't really working late." I know, overactive imagination. But if you watch the clip, you'll see what I mean.

There really are legitimate reasons people can't sleep. We all know a whole lot of Americans can't pay the mortgage and are worrying that someone's cheating. And if you're wondering what my worries are, well, those particular things aren't my worries. Besides, I don't have a house here in LA because I know there's no way I can afford the monthly payment on a $600K house. So no mortgage to worry about.

Mortgage or not, I'm staying far away from that cute Lunesta butterfly. I always tell my boys that the butterfly/moth medicine might have weird side effects on mommy's body, so no thank you! I don't want to read in ten years about some weird, undiscovered side effect and then say, "Oh, is that why I can't move my arm anymore?" 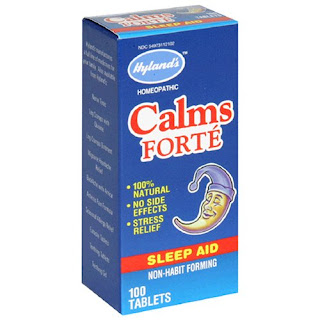 On the other hand, because I'm tired of feeling tired but not being able to sleep, I figured I'd give a couple of different over the counter sleep aids a try. Saturday night I was in this health food store called the Nature Mart and I picked up a bottle of this stuff called Calms Forte. It's supposed to be a natural, homeopathic sort of sleep aid. The box says "non-habit forming". I like non-habit forming stuff. Except for chai. I don't really mind that chai is habit forming. Plus, I figure it can't be all that bad since I can remember my mom taking this stuff all the time when I was a kid.

Wow, I guess we really do all turn into our mothers eventually, don't we? Hmm...

Anyway, I took these little Calms Forte tablets the past two nights. I give it an "A" for making me fall asleep at a reasonable hour. But the trippy nightmares? Um, no thank you. I don't particularly want to dream about being chained to a pole with a Venus Flytrap munching on my hand. I also don't want to see every person I know walking by saying, "It's too bad you can't get away from that Venus Flytrap. Sucker."

And then, just when I thought it couldn't get any worse, Darth Vader appeared and said he'd kill

the Venus Flytrap with his light saber but I'd have to marry Darth Maul.

It sounds a little funny as I'm writing about it and I can laugh about it now, but in the midst of it, I was scared as hell. You'd be scared too if someone told you, "Marry Darth Maul or die."

Can't you just imagine one of his antlers poking out your eye while you're having sex? And why couldn't Vader have said, "Marry Orlando Bloom or die?" That would've been a very good dream indeed. Sigh.

Alas, I have come to the conclusion that sleep aids and moi don't mix. Or at least that particular one doesn't work for me. I'd prefer dreams where I don't choose to be devoured by a venus flytrap in order to escape a fate worse than death.
Email Post
Labels: darth maul darth vader Drugs I know you think I'm crazy after reading this insomina lunesta Orlando Bloom star wars

Anonymous said…
I came to the same conclusion, Liz, that sleeping pills are not for me. I tried taking some experimentally before I flew to Australia but (a) I still woke up about 4 am anyway and (b) I felt completely zonked the whole day and unable to function properly. So I'll continue with my erratic sleep patterns thanks. And my dreams are weird enough anyway, God knows what goes in my unconscious while I'm asleep. I don't want even weirder dreams!
9:44 AM, March 04, 2008

Jameil said…
wow... SCA.RY!! i don't even like those prescription pain pills that make you groggy beyond belief. i like control of my limbs thankyouverymuch.
10:43 AM, March 04, 2008

SheWhoLives said…
"Can't you just imagine one of his antlers poking out your eye while you're having sex?"

LOL! Girl you crazy. But yeah any over-the-counter meds are best treated with extreme caution, even the ones that have "natural" and "non-habit forming" written all over them. May be try night Bach flower essences/valerian or camomile tea/burning lavender & ylang ylang oils to create a nice sleepy atmosphere (they're quite sexy too!).

And just to respond to robyn's suggestion of melatonin; this is a useful supplement but really it's best if used VERY occasionally i.e. to prevent jetlag on your annual holiday or something. If taken regularly over a long period of time it can wreak havoc with your natural body clock/serotonin levels... Just something to think about.
12:50 PM, March 04, 2008

Christopher Chambers said…
I had a dream I married that beeyotch who wrote the fake gang memoir. Then I went on to write a bestseller about the ordeal. Not so far fetched...
2:23 PM, March 04, 2008

Toni Campbell said…
This may be TMI, but my dreams get very vivid and crazy right before my cycle starts. They are also really violent, but I don't mind because the violence is usually against someone other than me!
2:31 PM, March 04, 2008

Liz Dwyer said…
Nick
I think I'd rather not be able to sleep than have those horrible dreams. Those were just not worth it. I've always had quite vivid dreams but never on the nightmarish level of these dreams.

Jameil,
The only time I've taken any kind of pain pills is after I had my kids. I didn't like how they made me feel either.

Robyn,
Good suggestion! A friend gave me some melatonin back in November, but I've read that there can side effects from taking it. I really worry about side effects. Ah, such a vicious cycle. Worry = lack of sleep!

Shelly,
Such a good suggestion. My sister says she's bringing me some sort of lavender spray when she comes to visit. But maybe I shouldn't wait till then. I'm glad you chimed in on the melatonin because that's exactly what I'm worried about.

Christopher,
What fake gang memoir? You know I don't read that street lit mess so I have no idea. And absolutely right! Your writing a best seller is not so far-fetched at all!

Anonymous said…
Not being able to sleep is in my A-Z post that you inspired. I'll post it later tonight.

I fear lying in a dark, silent room with my mind racing a mile a minute.

I really need to take the suggestions more seriously like bed at a certain time each night but as a single mom and full time college student it seems laughable right now.

Vijay said…
Hello, you don't know me at all. But have you researched, or ever heard any herbalist talk about using "pure, organic Jasmine Oil" mixed with a carrier oil rubbed in your feet before you go to sleep? Check it out, or talk to people.

Or a good Homeopath might help you with aligning your spirit, mind, and body. It is a slow process but a very strong process like tai-chi. 2 cents for a worthy cause. Be Blessed.
7:37 PM, March 04, 2008

Liz, Christopher is talking about the publishing scandal that hit today. A very well reviewed memoir called "Love and Consequences" has turned out to be fake. The writer claimed to be a white/native american girl who was in the Bloods gang in South Central. Turns out she is not Indian at all, grew up in Sherman Oaks and the best part? Went to Campbell Hall a very $$$ private school. Check out the New York Times today. Her editor is livid (and might get fired). The thing that is also fascinating is the author's own sister ratted her out after reading a profile about her in the New York Times.
8:02 PM, March 04, 2008

Jen said…
My dad used to have insomnia and what worked for him was boiled romaine. It smells like crap, but you boil a head, keep the water, refrigerate it and put it in other stuff, to curb the taste. You take it around 3:30 in the afternoon if you want to be in bed by 10 or so. It has high dosages of triptophan, apparently.
8:12 PM, March 04, 2008

I absolutely hear you about hating that feeling of lying down in a dark room. What's worst is when the birds wake up and the sky starts to get light and you've never managed to drift off. You clearly have so much on your plate and I can only imagine how having any semblance of a regular schedule is such a challenge. I feel for you but you are getting it done.

Vijay,
So nice of you to stop by and give me some advice. It's odd but I actually haven't researched as many natural methods of curing my issues with sleep as I probably should have. Crazily enough, I used to have an insane schedule so not sleeping actually worked in my favor since then I could get lots done. I've never gone to see a herbalist or a Homeopath. I suppose I should consider it. Thanks so much for sharing.

NYC/CR,
Oh my goodness, I just read about fake gang girl on the LAT and NYT websites! That heffa! How dare she! She grew up in Sherman frickin' Oaks! Heck no! And ooh, there must be no love lost between and her sister. I wonder what that's about!
8:15 PM, March 04, 2008

Liz Dwyer said…
Jen,
Romaine lettuce leaves? Triptophan -- isn't that what makes you want to pass out after eating Thanksgiving dinner?Wow, that's a cure I would never have thought of. How did he think of it?
8:18 PM, March 04, 2008

Lola Gets said…
LOL@Christopher and others on that fake gangster story.

Girl, didnt you read my post about the strange dream I had a few weeks ago? I had a dream that this comedy blogger liked me, but someone gave a script so I could talk to him, and then my grandmothers club had a freaky funeral ritual over at the house?? Thats some strange stuff! And it was all in one dream!
lol